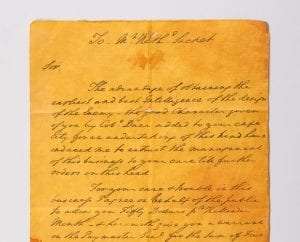 On May 23, 1789, Nathaniel Sackett sent a long, rambling letter to newly inaugurated president George Washington. The letter informed Washington that Congress had denied Sackett’s proposal that he be granted federal lands in order to create a new state bounded by the Ohio, Scioto, and Muskingum Rivers and Lake Erie.

Sackett was hoping that the letter would convince Washington to intervene on his behalf, or at the very least to appoint him to a position in the new government, but firmly believing it was not his place to do so, the President refused both requests.

Sackett was living in Fishkill, in Dutchess County, NY, at the time of his letter to Washington, but he eventually moved to the home of his eldest son, Ananias, at Sackettborough in the town of Thompson in what was to become – in 1809 – Sullivan County. He died there on July 28, 1805, his 68 years filled with the successes and failures of an adventurous man.

Nathaniel Sackett was born in Orange County on April 10, 1737, the son of the Reverend Samuel Sackett and Hannah Hazard Sackett. By the time of the American Revolution, he was serving in the New York Provincial Congress, where his abilities and ambition caught the attention of two of his colleagues, the estimable John Jay, and William Duerr, a representative to the Continental Congress and a Colonel in the Colonial Militia.

When General George Washington decided he needed to create an intelligence network, or spy ring, both men were quick to recommend Sackett.

“John Jay, later the first Chief Justice of the Supreme Court, had been running counterintelligence as head of the New York State Committee and Commission for Detecting and Defeating Conspiracies,” Nina Strochlic writes in an article entitled “The Letter That Won the American Revolution” in National Geographic magazine. “One of Jay’s operatives, a merchant named Nathaniel Sackett, had experience in secret writing and codes.”

Based on Jay’s recommendation, and his own observations of Sackett’s skills with codes and cyphers, Duerr wrote a letter to Washington on January 28, 1777.

“I beg Leave to introduce to your Excellency’s Acquaintance Mr. Sacket, a member of the Convention of the State, a Man of Honor, and of firm Attachment to the American Cause,” Duerr wrote. “He will communicate to your Excellency some Measures taken by him, and myself which if properly prosecuted may be of infinite Utility to the present military Operations. I have therefore recommended it to him to wait on you in Person in hope that some Systematical Plan may be adopted and prosecuted for facilitating your Manoeuvres against the British army.”

“In February 1777, Washington wrote a letter to Sackett in which he offered him $50 a month — out of his own pocket — to establish the first formal apparatus for the ‘advantage of obtaining the earliest and best Intelligence of the designs of the Enemy,’” Strochlic writes.

Although he lasted just six months in his job — Washington fired him for lack of tangible progress – Sackett put together the network of spies that would eventually prove invaluable in winning the war, and he personally trained Benjamin Tallmadge, the man who would not only succeed him, but far outstrip his accomplishments in the espionage game.

It was Tallmadge who organized and adroitly managed the group that has become known as the Culper Spy Ring, but Sackett’s contribution to the war effort was significant enough for some historians today to refer to him as “the godfather of American Intelligence.”

After he was relieved of his position as spymaster-in-chief, Sackett finished out the war as a sutler, an officially sanctioned merchant who followed the army and sold goods directly to the soldiers.

Following the war, in 1785, he came up with his proposal to establish a new state, roughly approximating the current boundaries of Ohio, “for the relief of all our distressed and neglected citizens” but he could not convince Congress to go along with the plan, even after he presented them with a petition with 340 signatures supporting it.

Meanwhile, the oldest of Nathaniel’s five children, Ananias, who had served as a private in the Revolutionary War, was hired in 1792 to build a road to access some remote lands owned by the Livingston family. What became known as the Sackett Road was the result, and it was so well laid out that much of it served as sections of the Newburgh-Cochecton Turnpike when that road was constructed several years later.

Ananias was paid for his work with 700 acres of land southwest of Monticello, and he built his residence near the pond that now bears his name. He conceived a prosperous community he called Sackettborough, but despite his vision, it never grew beyond a few houses.

“This borough was intended to perpetuate his name and deeds, but amounted to nothing more than a frail monument of the vanity and folly of human hope and ambition,” James Eldridge Quinlan wrote in 1873 in his History of Sullivan County. “No one can now point out the location which once bore the name of Sackettborough, and no individual now residing in the county can claim the once respectable patronym of Sackett.”

Ironically, Ananias Sackett eventually moved to Ohio, which had become the 17th state in 1803. He was living there at the time of his death on September 2, 1838.

Photo of A portion of “the letter that won the American Revolution” from George Washington to Nathaniel Sackett asking him to form a network of spies.