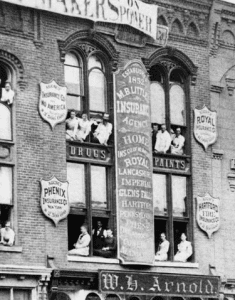 Getting the vote was just one of the issues suffragettes encountered in the late 19th century.

They also faced the premise of some theologians who contended the afterlife was restricted to an exclusive old boy’s club.

“A benignant looking, white-bearded patriarch,” who distributed candy to local children annually on Christmas Eve, debunked the theory in a Sunday afternoon debate in 1894 at Psychical Hall.

No — not Santa Claus.

Little was leader of The First Psychical Society at Glens Falls on Warren Street, a director of The Lake George Camp Association, a summer gathering of spiritualists and mediums, and a frequent speaker at the Glens Falls Lyceum.

Among his noted essays was “A Princess of Atlantis,” which The New York World published in December 1894, with photos allegedly of the lost continent.

The debate opened with De More S. Fero, for the sake of philosophical dialogue, stating the case of the exclusionary theologians.

“He quoted numerous texts from the Bible, which, isolated from their contexts, proved that a woman had no place in heaven, and that her mission was wholly earthly.” The Morning Star reported on Nov. 19, 1894. “The ladies looked disheartened.”

Then Little stood up, and, “in a few sentences showed the preposterousness of the first speaker’s argument. He knocked the underpinning from beneath it. The faces of the ladies brightened.”

Little said the premise was “too silly” to even elaborate on.

“The theory that we are going to heaven and our mothers are going to Hades is simply monstrous. If one reads the Bible as it should be read he will find no discrimination against women.”

Fero clarified that he did not personally believe women are excluded from Heaven, but argued the premise so that it could be disproved.

“The exercise concluded with a song,” as was common of the spiritualist meetings Little led.

Little had a reputation around Glens Falls for being neighborly, even after he suffered stokes in 1906 and 1911.

“For several years, during the warm afternoons of summer, he could be found daily sitting in a large arm chair in front of the Little & Loomis [Insurance] offices in Glen Street, exchanging cheery greetings with all passersby, regardless of their station in life,” The Post-Star reported at the time of Little’s death in 1914 at age 80.

“Performing charitable acts and a great love for nature were his chief characteristics.”

Meredith B. Little was the son of Russell Mack Little, the Methodist pastor who co-founded Glens Falls Insurance Co. after throat problems prevented him from preaching.

The son also was a director of Glens Falls Insurance Co., and for some years in the 19th century was co-owner of The Glen’s Falls Republican, a local weekly newspaper.

He was a mover and shaker, serving as village clerk for the 1865-66 government year, and advocating over the years for many causes.

Little was instrumental in bringing Republican gubernatorial candidate Theodore Roosevelt to Glens Falls in 1898, and was master of ceremonies at the campaign rally at the Opera House.

Little was not afraid to go against popular opinion.

He led opposition to paving Warren Street in 1906, and he was critical of the decision for Glens Falls to convert from a village to a city government structure in 1908.

Little quipped that a friend who supported the city charter said if was too bad Little opposed it, because they had planned to make him the city’s first mayor.

He was active for many years as a volunteer fire fighter.

He was an avid gardener and landscaper who enjoyed showing neighbors around the flower beds and green houses at his Warren Street home.

Provisions in his will provide a glimpse at his philanthropy, much of which was done quietly.

He bequeathed money to distribute candy to all children of Glens Falls for five years after his death, a tradition he had carried on for many years previous.

Little, while alive, also provided candy for the elderly.

In 1912, he contributed 25 pounds of Christmas candy for residents of the Glens Falls Home for Aged Women.

His bequeathed $500, unrestricted, for the Glens Falls Home for Aged Women – the equivalent of $13,000 in 2020 dollars – and an additional $200 for care of a resident to be designated by trustees of the First Psychical Society.

Little was founder and long-time president of the society, which focused on communicating with spirits of the dead.

He bequeathed $2,500 to the society, and gave the society the furniture and musical instruments that he owned that had been used in the society meeting rooms.