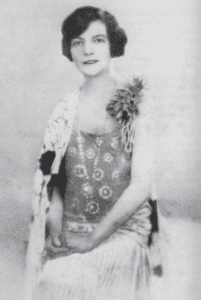 A significant aspect of the 1920s in London was the proliferation of unlicensed clubs that operated on the fringe of criminality. Lawmakers were determined to crack down on out-of-hours drinking, but youngsters beat them by organising all-night bottle parties.

Held on private premises, the host was expected to provide live music, a dance floor (the Charleston was the craze of the age), waiters, and suitable surroundings. Queen of the bottle party was Ma Meyrick, an Irish immigrant who was famous for introducing American jazz musicians and flouting licensing laws.

Kate Evelyn Nason was born in August 1875 at Kingstown, an affluent seaside suburb of Dublin, into a Protestant family. Both her parents died young and she was brought up by governesses at her grandmother’s home. About 1890 she attended Alexandra College, South Dublin, which was a prestigious Church of Ireland private school. From an early age, Kate set out to prove her independence. She claimed to have been the first woman to ride a bicycle in Dublin. In December 1899, she married Ferdinand Richard Holmes Merrick, a Dublin specialist in nerve diseases. They adopted the gentrified name-spelling of Meyrick and moved to England where Ferdinand practiced medicine at Basingstoke, Hampshire.

By 1909, Kate looked after a large family but was bored with respectability. About 1912, she left with her children, drifting for a year from one seaside town to another, before returning to her husband. During the war she studied hypnotism and practiced suggestive therapeutics on shell-shocked patients who had been sent back from the trenches. By the end of the Great War her marriage finally collapsed. In 1919 Kate moved to London where she managed Dalton’s Club at Leicester Square. The club had the dubious reputation of a pick-up place for the lost and louche.

At the time, the streets of London were filled with desperate young men who had recently returned from the battle fields. It was a disillusioned generation, haunted by memories of death and destruction, unable to find work, and rebuild their shattered lives. For the price of a few quid, Kate’s girls offered them sex and sympathy.

Under licensing laws, closing-up time was at ten, but Ma Meyrick disregarded such prudish austerities with Irish bravado. Accordingly the police raided her place. When she appeared in court on vice charges, she insisted that her girls gave comfort to the “terribly disfigured boys” who had come back from war. In spite of her social mission, Kate was fined for keeping disorderly premises and the club closed shortly afterwards.

In 1921, Kate opened her own night club, named the 43, at no. 43 Gerrard Street, Soho, the house where John Dryden had lived. It became a fashionable jazz night club. Among its members were artists like Augustus John and Jacob Epstein, and writers such as Joseph Conrad and J.B. Priestley.

In 1922, American violinist and bandleader Paul Specht formed a “Sweet Music” band with Charlie Kunz as leader, and succeeded in obtaining a sixteen week booking at the Trocadero in Piccadilly. Although influenced by musical giants from Duke Ellington to Louis Armstrong, the sound of the sweet band was an outgrowth from the big city society orchestra of the 1910s.

The early sweet bands paved the way for Glenn Miller’s Orchestra. When the engagement ended, Specht returned to America but Charlie Kunz stayed on in London (he would spend the rest of his life in Britain) and formed his own band. He debuted with providing musical accompaniment for diners at the sumptuous Lyons Popular Café, Piccadilly, which offered seating for 2,000 customers.

Kunz’s success was such that Kate booked the band to perform at the 43 where he experienced, in his own words, “some exciting times.” It was the beginning of a splendid career in Britain. In 1933, he started a one year residency at Casani’s Club which was run by former dance champion Santos Casani. Around that time Charlie started his BBC broadcasts, bringing him fame with a much larger audience. A new young talent named Vera Lynn acted as his vocalist. She made her first record and broadcast with Charlie. Eventually, Kunz became the highest piano soloist of his generation and Vera won the war for Britain. 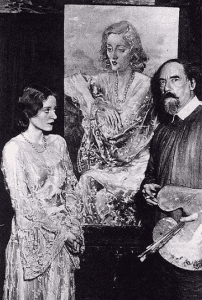 Initially Kate Meyrick kept within the law, but then began supplying alcohol in defiance of the 1921 Licensing Act. The authorities were concerned about other excesses too. Actress Tallulah Bankhead was born into the prominent political family of Brockman Bankhead in Alabama. In 1919 she moved to New York to escape her conventional surroundings and seek a career as an actress. She moved into the Algonquin Hotel at 59 West 44th Street, Midtown Manhattan, and quickly charmed her way into Algonquin Round Table, a group of writers, critics, and actors that, hosted by the hotel’s owner Frank Case, met for lunch each day from 1919 until roughly 1929. She made an impression on those present for her quick wit, passionate temper, and loose sexual morals.

By 1922, her acting career had made little progress. Restless, Bankhead moved to London. On the evening of January 6, 1923, she boarded the White Star’s flagship Majestic. That same year, she made her debut at Wyndham’s Theatre, Charing Cross Road, in the ten months running play The Dancers, playing opposite to Gerald du Maurier, then London theatre’s matinée idol (the play was subsequently brought to Broadway). She was given the role of Maxine, a Canadian saloon dancer.

With her glorious hair, her seductive voice and unique accent, her passion for on stage dancing and cartwheeling (a first on the British stage), she made quite an impression on London audiences. Such was the cult of the actress among public and critics alike, that her name was elevated into a verb – “to tallulah” became shorthand for the brand of exuberance that she brought to the stage. During her London years, Tallulah appeared in sixteen plays. She made her name as an actress in the Pulitzer Prize-winning play They Knew What They Wanted by Sidney Howard.

Tallulah frequented the 43 Club. She and Kate were one of a kind. She too had lost her mother (in childbirth) and was reared in the strict home of her grandparents as it took her father a long time to get over the loss of his wife. William eventually became a successful politician, ending as (42nd) Speaker of the House under Roosevelt.

Throughout her life, Tallulah herself remained a passionate Democrat. Possessed of relentless energy, she smoked over a hundred cigarettes per day, drank gin and bourbon like water, and carried with her a suitcase full of drugs to either help her sleep or keep her awake. She was engaged in numerous affairs with both men and women, providing journalists with plenty of gossip. She had flings with tennis champion Jean Borotra, the “Bounding Basque”; with Tory politician and Churchill’s greatest friend, Lord Birkenhead, and others. Her salty language and outrageous behavior were considered shocking by many of her contemporaries.

Addicted to cocaine, Meyrick’s place was a safe haven for her. Club 43 was said to be the center of drug dealing in London’s West End. The venue was raided on numerous occasions, but dealers and addicts remained untouched because of a hidden escape route leading into nearby Newport Place. But the times they were a-changing.

In 1924 Conservative Home Secretary William Joynson-Hicks (known as Jix) set out to suppress London night clubs with puritanical zeal. Regulars of the 43 included politicians, officers of distinguished regiments, members of the peerage, and rich city snobs. They mingled with dancers, prostitutes, dodgy dealers, and delinquents. The authorities worried about the undermining of social barriers. The upper classes had to be protected from their own weaknesses. The 43, which Evelyn Waugh depicted as the “Old Hundredth” in his 1934 novel A Handful of Dust, was raided by the police in July and once again in November 1924. Ma Meyrick was sentenced to six months for selling liquor without a license. Her clients, including the King of Romania and the Crown Prince of Sweden, protested against her imprisonment.

In November 1928, Kate was condemned to fifteen months imprisonment for bribery and corruption. Once released from prison, she resumed business, but the Metropolitan Police was by then far more ruthless in throttling London night life. She was back inside for six months in late 1930. Poor conditions at Holloway Prison weakened her health and she died in 1933 of pneumonia. Shortly before her death she composed her memoirs entitled Secrets of the 43. The book was banned. Although her story is innocuous by contemporary standards, it shows a number of then prominent people in a very poor light. Censorship was a means of maintaining class distinctions.

On Black Tuesday, 29 October 1929, stock prices on Wall Street collapsed. The subsequent slump in Europe was rooted in the economic consequences of the First World War. Kate Meyrick’s phenomenal success as a businesswoman and club owner had coincided with the excesses of the 1920s. Her dramatic career encapsulates the decade. By 1931, England was in crisis. Kate was in prison, ill, and approaching the end of her life. Tallulah returned to New York that same year. The lights of Soho dimmed and darkened. The next American invasion into London would be that of large numbers of service personnel in preparation for the Allied offensives of the Second World War.