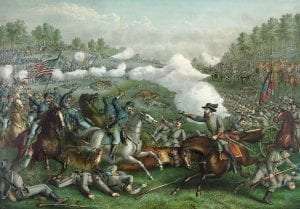 Josiah was a prosperous farmer who not only sent Johannes to college, but also his second eldest Peter A. LeFevre at the same time. In the 1850 census, his personal wealth was $8,700. 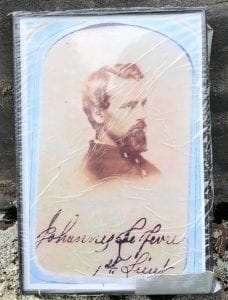 Johannes went to the New Paltz Academy, overlooking the Wallkill River, and then to Claverack Academy in nearby Columbia County, both private schools that educated many future teachers. Afterward, he enrolled in Union College in Schenectady and in 1861 graduated with a civil engineering degree. He did not have time to seriously apply his new degree because Johannes was swept up in Civil War. Along with his brother Peter, the two men enlisted in the 156th Regiment of Infantry in Kingston, Ulster County – Johannes in E Company and Peter in A Company.

On August 25, 1862, Johannes was commissioned a 2nd lieutenant in E Company, which was recently created by Colonel Erastus Cooke. His received a $25 signing bonus for committed to three years. Along with the rest of the 156th he was mustered into service on November 17, 1862. The Regiment left New York on December 4, 1862 and sailed for New Orleans.

Johannes was a prolific letter writer, often writing to friends as well as to family members, most notably his father. (Civil War soldiers’ letters can often be more informative than diaries or memoirs, because they were intended to be private, and tend to be candid).

After about a year away from home, including the passing of Christmas, Johannes wrote: “I am lonely and thinking of my friends around the Paltz.” In a letter written on January 24, 1863 from his camp in the Carrollton neighborhood of New Orleans, he wrote his friend Solomon “Sol” DuBois, describing his surroundings. His tent was adequate and he was warm, even better it had wooden floorboards.  As an officer of some means, Johannes was capable and did supplement his rations.

Although we don’t know how Johannes felt about slavery, in a letter to Sol he noted escaped slaves were living in the camp. The Union Army frequently employed escaped slaves for cleaning, cooking, laundry, and as body servants.

Although he was anxious to see battle, he also complained he was “hard up” to see women. “I only wish we had a few more pretty ones here, so that a person could get a squint at one occasionally,” he wrote. “I got a peep, through blinds, today at a very pretty face. I would give five dollars to get acquainted there if we are going to stay here any length of time.”

Sol DuBois replied to his friend “Johan” about a month later on February 17, 1863.  “You might be in a battle with the bullets hissing over your head or you might be sitting in your tent enjoying yourself beside some fine lady of the Southern Chivalry being you are ‘hard up.’ ”

Perhaps wishing he too was in the army, Sol wrote that “mischievous boys and wild boys are all got married or gone to war and us slow + easy fellas [are] home all alone.”  He did manage to keep himself occupied in the local choir, Sol said, and reported seeing Frederick Douglass speak nearby in Plattekill (Ulster County).

As Sol was writing his letter, Johan was on an expedition to Bayou Plaquemines Brule.  Then in December, 1863, he was commissioned a 1st Lieutenant and transferred to B Company. He went on to become a Captain, in E Company, in September, 1864. This promotion came just before the first major battle he took part in, the Third Battle of Winchester (also known as the Battle of Opequon). The battle, part of the Shenandoah Valley Campaigns was fought on September 19, 1864 just outside Winchester, in Northern Virginia. The clash between Union Major General Philip Sheridan and Confederate Lt. General Jubal Early was an uneven match. Some 40,000 Union forces out-manned 15,000 Confederates. 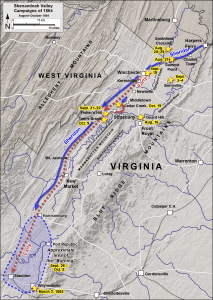 The Shenandoah Valley helped supply the Confederacy with its agricultural output. With Sheridan in the Valley, Jubal Early moved to destroy the B & O Railroad at Martinsburg in West Virginia, leaving some of his troops to face the advancing U. S. forces.

In a letter to his father, Captain LeFevre described the events leading up to the battle. He wrote that the 156th formed a line of action under cover of some hills about two miles east of Winchester. His brigade was among those at the front. A little past 10 am they given the order to advance in quick time. Johan gradually moved up a hill, pushing through a narrow strip of woods to an open field. When they reached the open area, the advance moved to double quick time. The “whole line advanced with furious yells,” Johan later wrote to his father. Once on the other side of the field, they drove the enemy through a patch of woods stopping only to reform their somewhat broken lines. Captain LeFevre’s company continued its advance to the crest of the ridge.

“We were met by gunfire from the enemy, who were not over a hundred yards distant two lines deep + protected by a rail fence,” he wrote. The Union soldiers on either side of LeFevre “were falling in piles,” he said.  The Confederates counter-charged, forcing E Company to fall back 50 yards and attempt to form up again at the bottom of the hill.  “As long as I live shall I remember the lion courage displayed by the officers and men of our Regt.,” he wrote.  Johan tried to rally his men: “I seized one of the colors myself from the color bearer [and] formed my company around it.” However, the rebels “gained our left flank + were pouring in a murderous cross fire.” They continued the retreat.

They “fell back ¼ of a mile farther till our flanks were protected.” Union soldiers laid down and kept up a rapid-fire. The advance of the enemy was finally checked. Company E stood up to join another charge by the 156th, “regaining most of the ground we had lost.” Johan, with his troops, was forced to halt a little before noon. “There the men lay on their back to load + then raised on their knees to fire, as the rebels, poured musketry + Shell + Canister over + into us.” During this time, Johannes lost most of his men. Their right flank became exposed again, and there was no support to help his company from quickly being decimated.

Johan wrote that as they hoped for reinforcements. The rebels were forming on their front as Union artillery “began to pour tremendous volley of shell + grape right over our heads, into the woods where the enemy were massing their forces.” By 3 pm, they had taken the loosened the enemy with a flanking maneuver and were engaged in a frontal assault.  Exhausted, Captain Johan LeFevre saw the wounded, dead, or dying around him. He saw a neighbor, Captain Hasbrouck, fall.  His hope was raised when Union cavalry charged into the battle and “utterly routed the rebs.”

“I am thankful to almighty God, that I am today among the living and unharmed,” Johan wrote, considering it “one of the most terrible battles of the war.”

A month to the day the Third Battle of Winchester commenced, LeFevre was at what is considered the final battle in the subjugation of the Shenandoah Valley, the Battle of Cedar Creek (also known as the Battle of Belle Grove), fought October 19, 1864. There the encamped soldiers were surprised by Confederates under General Early. “[I was] wounded in the first assault of enemy upon our works,” he wrote. “They carried our work + I fell into the enemy’s hands.” Johannes was wounded by a Minié ball that entered his left thigh and exited his hip.

Johan laid on the field for 24 hours until he was attended by a rebel surgeon who dressed his wound and had him removed to a hospital (he was later returned to Union lines). By the time his father was alerted to his injury, Johannes had lost the use of his left leg. The rebels had also robbed him of his possessions when they found him. 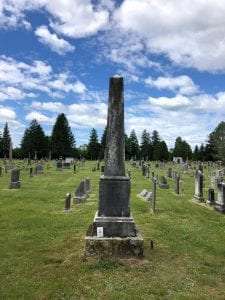 Johan asked his father to travel to the South. His father Josiah made the long journey from New Paltz to Winchester where he found him in good spirits and well cared for. After a short time, Josiah left his son, assured they would be reunited soon. Unfortunately, doctors did not use modern hygienic practices, often times they did not clean their instruments until the day’s surgeries were done. And without the aid of antibiotics, infections were difficult to combat.

On November 4, 1864, Johan took a turn for the worse. A letter from Dr.  J.E. West informed his father, but Josiah was already making his way back to New Paltz. Later the doctor wrote that Johan was “seized with a chill, which was followed with a great frustration from this time he gradually sank and died on the morning of the [November] 9th at 10 am.”

Josiah asked the doctor to embalm his son’s body and have it sent to New Paltz. On November 14, 1864, Dr. West wrote Josiah one more time to report that he had complied with his request. He assured Johan’s father that his son did not suffer, other than in creating pain for his family in dying.

After his body arrived, he was interred in the new Rural Cemetery founded in New Paltz in 1861, in part to accommodate the war dead. Johan’s grave is located not far from a monument to those who New Paltz who gave their lives during the Civil War.

Illustrations, from above: “Lithograph of the Battle of Opequan or Winchester, Va.” by Kurz and Allison; Johannes as a 1st Lt.; map of the Shenandoah Valley Campaign August-October 1864; and Johannes’ gravestone.