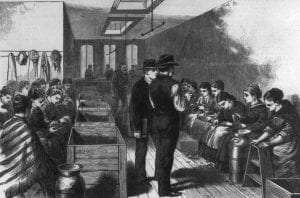 Between 1725 and 1744, Bradford produced the New-York Gazette, the city’s first newspaper. Lower Manhattan continued to be the center of New York’s printing industry for many years, but by the 1860s the street took on a northern European accent and became known for a different type of leaf – tobacco.

Cigar making was introduced to London by Dutch and German Jewish migrants. Born in 1828, Solomon Gompers worked and lived in Amsterdam. He and his family had moved to East London by the time that his son Samuel was born in 1850. They settled in Spitalfields in the midst of an ever growing number of desperately poor immigrants and refugees. Young Samuel attended the Jewish Free School on Bell Lane. At the age of ten, he followed his father into the cigar-making profession. 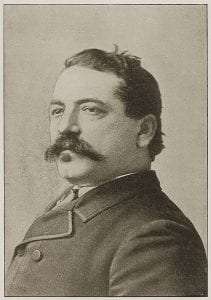 In 1863, Solomon decided to move his extended family to New York City with the help of a loan from the London Cigar Makers’ Society (workers in the industry were internationally organized and prominent in the First International). The American packet London carried 251 passengers. Twenty of the 108 male passengers on board were cigar makers.

For the first few years, both Samuel and his father worked at home in an overcrowded tenement on the Lower East Side of Manhattan, rolling cigars by hand and being paid by the piece, whilst competing in the trade with a large contingent of Bohemian and Hispanic immigrants. He then sacrificed his independence and took a job in M. Stachelberg’s cigar-making factory in Pearl Street.

Having joined the Cigar Makers’ Local Union No. 15, he witnessed the introduction of machinery and its devastating impact on the livelihoods of skilled workers. An active Union participant, he stressed the futility of resisting technological advances, and advised fellow members to follow a non-partisan political course. Instead, trade unions should pressure management through collective bargaining to find ways of harmonizing change in labor practices with workers’ rights. In 1886, he founded the influential American Federation of Labor (AFL) and served as the organization’s President until his death in 1924.

Oscar Hammerstein was born in Prussia into a Jewish family. His wish to study music was blocked by his father who forced him to pursue a career in business. After the death of his mother, Oscar ran away from his dominant old man, pawned the family violin, and purchased a ticket to sail from Liverpool to New York, arriving in in the city in 1864. He was eighteen years old.

Hammerstein too found a German employer in Pearl Street, sweeping the floors at W. Mendel’s (hand-made) cigar manufactory. He quickly made his way up in the industry and became one the pioneers of mechanization in tobacco production (he held many patents for improving machines in the rolling process). In 1874, he founded and edited the U.S. Tobacco Journal which he managed for the next fourteen years.

As money started rolling in, he returned to his first love in life – music and the stage. Tentatively at first, moonlighting as manager for several German theatres downtown, but he soon doubled his efforts and started building his own theatrical empire.

When Harlem was still a largely developed stretch of goat farms and shantytowns, Hammerstein grasped the opportunity to acquire cheap land. In 1889, he built the Harlem Opera House, his first theatre, on 125th Street; in 1890, in the same street, he opened the Columbus Theatre for light entertainment; and in 1893, Hammerstein inaugurated his third theatre – the Manhattan Opera House on 34th Street.

Although the last venture proved financially disastrous, Oscar pushed on and opened the Olympia Theatre in 1895 at Longacre Square (later renamed Times Square). As a theatre complex it was without comparison, consisting of a Music Hall, a Concert Hall, and a Lyric Theatre, which together could seat six thousand spectators, and a roof garden theatre. The grey Indiana limestone building, designed in French Renaissance-style, was opened in a grand manner on November 25th with the appearance of over thirty European performers, including acrobats, high-wire walkers, clowns, puppeteers, and a female impersonator. Tens of thousands of New Yorkers pushed and mobbed to be part of the spectacle. What would become New York’s premier theatre district was put well and truly on the map. 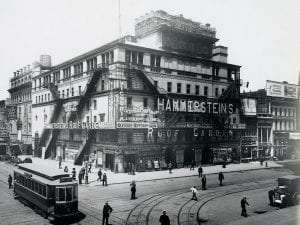 Within a ten year period, Oscar built three more theatres of which the Victoria (1899), at the corner of 42nd Street and 7th Avenue, was the most successful. Shrewdly managed by his son Willie, household names like Charlie Chaplin, W. C. Fields, Al Jolson, Buster Keaton, Houdini, and Mae West were among the many performers who made the Victoria theatre Times Square’s “nut house.” Under Oscar’s fearless and almost reckless expansion policy, Times Square became an immense construction site of showbiz undertaking.

Hammerstein’s passion for opera would prove his downfall. In October 1883, the Metropolitan Opera House (Met) opened on Seventh Avenue and 39th Street with a performance of Gounod’s Faust. Called the Metropolitan Opera Association, the company owned the land on which the building was erected. The Met could afford to attract the world’s best singers (Enrico Caruso, Jenny Lind, and many others), but to Hammerstein and like-minded opera buffs its productions were mediocre, and opera itself little more than an exclusive gathering of the social elite.

In 1906, Oscar confronted the Met by opening Manhattan Opera House (his eighth theatre) which for a few years would dominate grand opera in town. He revitalized the traditional repertoire of Aida, Carmen, and Rigoletto, but also challenged American ears by offering premieres of Pelléas et Mélisande or Elektra, and controversial works such as Richard Strauss’s Salomé or Massenet’s Hérodiade. The massive production costs became unsustainable and after four years of operatic activity Oscar was threatened with bankruptcy. His son Arthur negotiated a deal with the Met and Oscar was forced to accept a buy-out. He took the money, moved to Britain, and built the London Opera House to rival Covent Garden’s Royal Opera. Within two years the venture collapsed.

Having returned to New York, Oscar tried once again to enter the world of opera and built the Lexington Opera House. It failed. He died in August 1919, almost broke, but his legacy was there for all to see. Development of the district itself, his innovations in theatre design and acoustics, and his bankrolling of vaudeville comedy and opera productions, inspired later generations to advance the opportunities he had created for them. He was the Father of Times Square. The family name became anchored in showbiz history with the work of his grandson Oscar Hammerstein II whose musicals conquered the world. 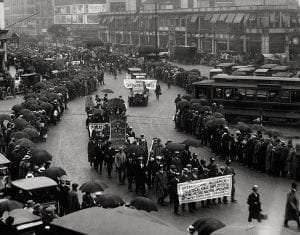 Two weeks after Hammerstein’s death, on Monday Augustus 18, five hundred attendees were packed into the auditorium at the Lexington to watch a cast of 150 members of the upstart Actors’ Equity Association perform. At the occasion, W. C. Fields acted as master of ceremonies.

The show was the first of a week of sell-out benefit performances put together by the Union which had stunned the theatrical world by going on strike. A week later Samuel Gompers returned from Europe where he had been attending the Paris Peace Conference at Versailles. He made his way to the Lexington where he was received with a three-minute ovation. His passionate intervention cemented public support and resolved the bitter conflict between actors and producers. Equity was recognized, management law suits were dropped, and striking actors would not be discriminated against.

During the early 1860s, two immigrant cigar makers arrived from Europe in Pearl Street, Manhattan, at more or less the same time. One came to organize the American Labor Movement; the other established himself as King of Entertainment. The latter built the theatres; the former guaranteed the workers’ rights of actors and performers. Wrapped around New York City’s socio-cultural history lingers the scent of an aromatic cigar.

Illustrations: Above, the interior of a NYC cigar factory before the strike of 1877 (Frank Leslie’s Illustrated Magazine); Samuel Gompers in 1894; and Hammerstein’s Victoria Theater and Roof Garden, northwest corner of 42nd Street and 7th Avenue in Manhattan in 1908 (courtesy Museum of the City of New York); and striking actors parade through Columbus Circle on August 18, 1919 (Courtesy Actors’ Equity Association).