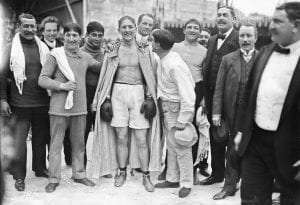 French pugilist Georges Carpentier was traveling with the Seils-Floto Circus from Albany to Montreal in May 1920 when the train stopped briefly at Plattsburgh.

(In an interesting side note, Carpentier was traveling in the same private rail car that President Woodrow Wilson used a few months previous on his trans-continental campaign to gain support for the League of Nations.)

Upon learning that the large water body next to the rail line was Lake Champlain, Carpentier took a “baptism” dip in honor of his countryman – Samuel de Champlain.

“He jumped to the ground and ran down the bank,” the Ticonderoga Sentinel reported. “He was clad in his trousers and a sleeveless undershirt, and, getting down on his knees leaned over and dunked his head and shoulders into the water. He repeated this several times, then, rising to his feet, shook himself like a playful terrier and ran laughing up the bank.”

Carpentier, the world light-heavyweight champion who went by the nickname Orchid Man, made several extended visits to the United State in 1920 to present boxing exhibitions, for filming of his staring role in the movie “The Wonder Man,” and to publicize his on-again, off-again negotiations to fight Jack Dempsey.

Speaking through an interpreter at the Waldorf-Astoria Hotel in New York City in September 1920, Carpentier said of the proposed fight: “If I lose I will not cry, but be a real sportsmen.”

Carpentier did, in fact, lose the “Fight of the Century,” eventually held July 2, 1921 at Boyle’s Thirty Acres at Jersey City, N.J. – the first prize fight for which ticket sales exceeded $1 million.

Dempsey knocked out Carpentier in the fourth round.

There was national interest in the fight, including at Glens Falls, where nearly 2,500 people packed the street and sidewalks outside The Post-Star newspaper offices at the corner of Glen and Park streets to follow bout-by-bout reports.

“The crowd was so large that it filled the street from the doors of The Post-Star building completely across the street and extended in both directions for some distance,” The Post-Star reported on July 5, 1921. “Windows in buildings on opposite sides of the street were all occupied by eager fans.”

It was real time reporting decades before the Internet, years before television, and just at the brink of the radio industry.

The Post-Star utilized the most reliable real time mass communication technology of the time: an editor reading Associated Press bulletins over a megaphone through an open window on the second floor of the Post-Star building.

Reading of reports from AP writers began at 1 pm, an hour before the start of the fight.

Once the report was announced, a typed copy was posted on the ground floor window for those to read who may have missed it, and a complete report posted at the end of each bout.

You can watch Carpentier’s fight against Jack Dempsey online here.

Photo: Georges Carpentier and supporters in Monte Carlo in 1912.