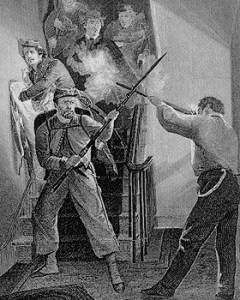 On Friday, May 24, 1861 President Lincoln received two visitors: a Senator and a reporter.

Years later the reporter gave this account of the occasion: “As we entered the library we observed Mr. Lincoln before a window, looking out across the Potomac….. “Excuse me,” he said,” but I cannot talk.”… Then to our surprise the President burst into tears, and concealed his face in his handkerchief… After composing himself somewhat, Mr. Lincoln sat down and invited us to him. “I will make no apology, gentlemen,” he said, “for my weakness; but I knew poor Ellsworth well, and held him in great regard.”

Elmer Ellsworth was born in Malta, Saratoga County, NY, on April 11, 1837. In Chicago he joined the popular United States Zouave Cadets, a military drill unit. They wore striking uniforms, practiced intensive drills and paraded in competitions on public occasions. Each group needed an “expert” on drill and military practices and Elmer quickly filled this role, adopting the honorary title of Captain. This lead to an appointment as Assistant Adjutant General of the State of Illinois with a title of Colonel at the age of 22. His duties brought him to the capital, Springfield, where he met Lincoln and was invited to the house to meet the family and to read law in Lincoln’s office.

After the fall of Fort Sumter, he resigned his position with the Lincoln administration and went to New York City to raise a regiment of volunteers from the New York City Fire Department, the 11th New York Infantry, also known as the First Fire Zouves.  On May 24, 1861, he led his regiment across the Potomac River to Alexandria, VA. On seeing a Confederate flag atop of a hotel, he led a small party to seize it and was shot and killed by James W. Jackson, a southern sympathizer. Thus, he became the first Union officer killed in the Civil War.

You can read more about Elmer Ellsworth and see the last letter he wrote home, here.

Paul Perreault has been the Malta Town Historian since 2009. He served as a principal in the Ballston Spa School District from 1978 until 1998 and as a history teacher at Shenendehowa High School from 1967 until 1975. He earned a BA in History at Siena College and MA degrees in history and school administration from SUNY at Albany. He is a member of the Association of Public Historians of New York State, the Saratoga Area History Roundtable and the Ballston Spa Rotary Club. Paul can be reached at historian@matla-town.org.

Illustration of the killing of Elmer Ellsworth provided.