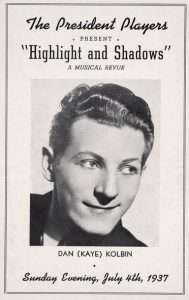 It has often been said that the first play Danny Kaye ever saw, he was in.

That would have been in June 1929, at the White Roe Lake House in Livingston Manor, Sullivan County, NY, where the soon-to-be legendary performer got his professional start, and refined his trademark comedy routine.

It’s not that Kaye (born David Daniel Kaminsky) had never performed before. He and his partner Lou Eisen, better known in the Catskills in later years as Lou Reed (not that Lou Reed), had been singing at parties, social affairs and street corners in Brooklyn for over a year when discovered by Nat Lichtman, the entertainment director at the White Roe.

Lichtman was visiting his mother in Brooklyn one weekend, and stopped at a local candy store to use the telephone when he came across “Red and Blackie,” as Kaminsky and Eisen had dubbed themselves, singing duets on the corner. He hired them on the spot to work for him that summer in Livingston Manor in the Catskills.

In his 1994 biography of Kaye, Nobody’s Fool, Martin Gottfried spends quite some time on the White Roe years. It was there, after all, that Danny Kaye was born. It was his tenure at White Roe, undeniably, that convinced Kaye that he could succeed as an entertainer. The story of Danny Kaye, then, is in some ways the story of White Roe.

Gottfried relates how Meyer Weiner brought his family to Livingston Manor to farm, and was so successful that in 1919 he purchased 750 acres “on the face of White Roe Mountain, sloping gently down to the town lake.” Weiner bought the land, not to farm, but “to create a summer place for young Jewish single people — ‘no families, no children, nobody under eighteen, nobody over thirty-five. Lots of athletics, all kinds of activities and all the food you can eat.’”

Weiner started out with ten rooms, and added thirty tents, each sleeping four, in the second summer. Growth was steady, and by the time Lichtman brought Red and Blackie to the mountains, the White Roe was well established.

“The hotel had new and elaborate facilities, with accommodations for four hundred people, albeit, five and six to a room,” Gottfried related.

“The summer of 1929 was a gala one at White Roe. A new casino had just been christened, and it was as grand as any in the Catskills. A casino was not a gambling room, but a hotel’s social center, and this one was an imposing edifice, a three-story, gabled affair with brown shingles and white trim. Porches swept entirely around on two levels, offering panoramic views of the Catskills, and there was a recreation hall on the main floor. There was also a nightclub below, but it would not fully function until the repeal of Prohibition in 1933.

“Inside, on the main floor, high, arched windows and French doors were spaced along the perimeter of the recreation hall. Above the fifty-foot wide stage, the proscenium arch rose twenty feet to the ceiling, facing an auditorium whose folding chairs could seat five hundred in a pinch. The facility was as well-equipped as any on Broadway, having wings and fly space, drops, dimmers, and full lighting. All of this was by the design of Nat Lichtman.”

With this backdrop, and Lichtman’s guidance, Eisen became Lou Reed and Kaminsky became Danny Kaye. The two sixteen-year-old singers had been “hired as tummlers, and their job was to tummle” all day and as late into the night as necessary — in the dining room, on the front porch and down by the lake.

“A tummler’s duties were broadly defined. Lou and Danny, besides being a harmony team in the Saturday night musical shows, were expected to participate in each night’s entertainment. And there was something scheduled every night. On Sunday nights, there were concerts by the house band (drums, two violins, trumpet, three saxophones, and a piano), which at the time was Lew Sandow and his Columbia Captivators. Weeknights there were masquerades, campfires, or games — anything as long as it was something. Guests would even ask the owner what was scheduled between the end of dinner and the start of the entertainment,” Gottfried wrote.

Danny Kaye worked for seven summers at the White Roe, eventually becoming the headliner there, and then spent the summer of 1937 at the President Hotel in Swan Lake (town of Liberty in Sullivan County), where he made $100 a week and was sometimes billed as Dan Kolbin. From there, he moved on to the classy Tamiment in the Poconos. By that time, he had already appeared in a number of movies, though nothing noteworthy.

He spent the early ’40s doing stage work, including one of Moss Hart’s plays, and by 1944 was a favorite of Samuel Goldwyn, who helped make him a Hollywood star. He starred for Goldwyn in “Up in Arms” in 1944 and “Wonder Man” in 1945, and then excelled in “The Kid from Brooklyn” and “The Secret Life of Walter Mitty” in 1946 and ’47, respectively. Dozens of films followed, including “Hans Christian Andersen,” “White Christmas” and “The Court Jester.” Kaye was presented with a Special Academy Award in 1954 for his “unique talents, his service to the industry and the American people.”

Halliwell’s Filmgoer’s Companion described him as the “ebullient American star entertainer of stage, screen, and TV,” who gained “enormous popularity.” In 1984, he was honored at the Kennedy Center, where President Reagan cited his tireless work for UNICEF.

Danny Kaye died of a heart attack and complications from hepatitis in 1987. He was seventy-four.

Photo of a playbill featuring Danny Kaye from the President Hotel in Swan Lake.