Coney Island’s development began in the 1840s, when it was still an island. Looking at a map, one can see Coney Island creek, which ends at Shell Road. That’s because the creek used to be a river which flowed into Sheepshead Bay, but through the process of filling in land, Coney Island was connected to the rest of Brooklyn.

When the first buildings were built on Coney Island, people who wanted to keep the island as a natural park were outraged. In the early 1900s, the city wanted to demolish all buildings south of Surf Avenue, the main avenue that runs through Coney Island.  In the 1920s, the city zoned the land so the land north of the boardwalk and south of Surf Avenue would be used for amusement purposes only.

During the Second World War, Coney Island was considered the largest amusement park in the country, attracting millions of visitors each year. During its most successful time, the island actually contained three amusement parks: Luna Park, Steeplechase Park, and Dreamland. Steeplechase Park, the first of the three, built in 1862 by George C. Tilyou, whose family ran a restaurant nearby. 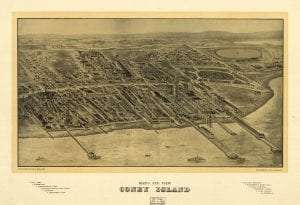 When he visited the 1893 World’s Columbian Exposition in Chicago, Tilyou saw Ferris’s Wheel, which was introduced at that World’s Fair, and decided to build his own. Once it was built, it immediately became the island’s biggest attraction. He added other rides as well, such as a mechanical horse race course called the Steeplechase, from which the park derives its name. (This is also the origin of the name of a current horse-themed rollercoaster in Coney Island, which stands where the original ride stood.)

Steeplechase was the western-most park, located where the present-day MCU Park baseball stadium is. Steeplechase was also the park which lasted the longest, because unlike the other two, it made enough money to thrive. Tilyou and his family were able to update the park gradually due to its success, so new rides, such as the Parachute Jump, opened on its grounds. 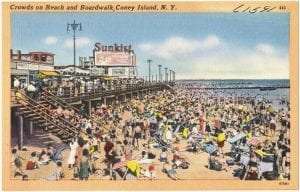 Luna Park was the second park, built in 1903. The park was built atop the ground of Sea Lion Park, considered the first permanent amusement park in North America, which was run by Paul Boyton. Luna Park was located on the north side of Surf Avenue, on a site between West 8th and 12th Streets, and Neptune Avenue. The park was created by Elmer “Skip” Dundy and Frederick Thompson. Thompson and Dundy leased empty plots from Tilyou, and used these land plots to build Luna Park.

The land was located where the old Elephantine Colossus, a seven-story tall attraction built in the shape of an elephant, once stood. Unfortunately, in 1896, it caught fire and collapsed and many were killed. After the collapse, Dundy and Thompson built Luna Park. 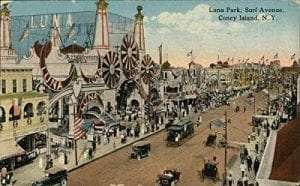 The last park built was called Dreamland, and it was the largest, most luxurious, and the grandest of the three. It was built in 1904 by then-state senator William H. Reynolds, who wanted a more elegant and upper-class destination compared to noisy, chaotic, and often considered low-class Luna Park. In order to build Dreamland, he had other people bid on the property for him in order to hide his true means of building an amusement park there. Once Reynolds won the bid, he used his political power to seize control of West 8th Street, which ran through the middle of the area. And so, Dreamland was built. With these three parks, Coney Island thrived.