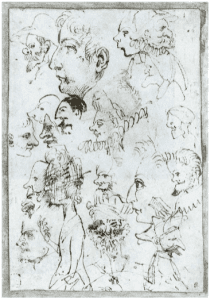 Say caricature, think politics – ever since the age of James Gillray and the British mockery of Napoleon, caricaturists have made a career out of political commentary. To this day, their work appears on the editorial pages of newspapers or magazines.

Traditionally, we appoint politicians and turn them into caricatures and to elect a caricature and raise them to the status of a politician is a more recent phenomenon. But the genre flourished away from politics. From Italian origins, it developed as a game, a form of entertainment, and a genteel salutation.

A caricaturist is a person who exaggerates personal features in order to express physical likeness and create a comic effect. The term ‘caricatura’ first appeared about 1600 in reference to Annibale Carracci’s work and was derived from the verb caricare – to load or exaggerate. A caricature is a loaded portrait. 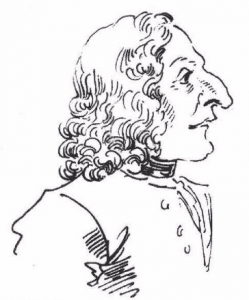 The fascination with reading faces goes back as far as Leonardo da Vinci’s grotesque figures. The interest was stimulated by Renaissance theories which claimed that an individual’s character can be judged from his/her facial attributes. Pier Leone Ghezzi, a member of the Accademia di San Luca in Rome, was commissioned by Roman churches to paint religious images. In his spare time, he produced hundreds of portrait caricatures of named individuals and (English) visitors to Rome. His ink drawing of Vivaldi’s aggrandized nose (1723) is often reproduced. Antonio’s hooter sticks out as a marker in the history of caricature.

About 1740 London printmaker Arthur Pond published a series of twenty-four caricatures after original drawings by Ghezzi (re-published in 1823 as Eccentric Characters). By the mid-eighteenth century caricature was taken up as a private pastime by wealthy amateurs who had returned from the Grand Tour with bundles of sketches as mementos of their Italian trip. They started sketching each other, making subtle exaggerations, and gently poking fun. Caricature was a social game and a shared amusement between friends.

Around the same time, English professional caricature turned political. William Hogarth’s gallophobia set the tone for fellow artists. James Gillray created caricatures that were directed against George III and Napoleon. The gifted Thomas Rowlandson produced cartoons of the manners and morals of the age. Having lost some of its appeal, the genre was revived by an Italian immigrant into London.

Carlo Pellegrini [pseudonym: Ape] was born in March 1839 in Capua, Campania, into an aristocratic family. A small boy with a massive head and tiny feet, his appearance attracted attention. He was the ‘pet’ of Neapolitan society. Without artistic training and inspired by reproductions of Melchiorre Delfico’s “loaded portraits” of Giuseppe Verdi and various other personalities, he caricatured his friends.

Carlo moved to London in November 1864 where he was commissioned by Thomas Gibson Bowles to produce portraits of the politicians Disraeli and Gladstone for Vanity Fair magazine. Reproduced as full-page illustrations, these images were an immediate success. Ape’s drawings shaped modern English caricature. Max Beerbohm idolised him. Between 1869 and his death in January 1889 he caricatured 332 prominent Victorians for Vanity Fair.

Together with composer Paolo Tosti, singing teacher to Queen Victoria and the Royal family, he organized dinners in the back parlor of Pagani’s restaurant in Great Portland Street. These occasions became a popular bohemian rendezvous in the Victorian West End of London. Boasting a wall with over 5,000 signatures from patrons such as actress Sarah Bernhardt, painter James Whistler, and composer Pietro Mascagni, Ape supplied the sketches and caricatures in what was known as the Artists’ Room. Caricature had found a new home. 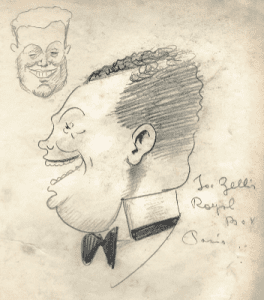 Giuseppe Salvatore [Joe] Zelli, ‘King of Cabaret Keepers’, was born in Rome and settled at a young age in New York. He began his career as a waiter. In 1908/9, he entered the nightclub business, running Jack’s Bar at the corner of 43rd Street and Madison Avenue. With the advent of the First World War Joe joined the Italian Army. After the Armistice of November 1918, he found himself in Paris working at a bar that served US military personnel. At the time, Paris was buzzing with excitement. Boat loads of American tourists escaped the restrictions of Prohibition, taking advantage of a strong dollar. Dancing and cabaret venues opened all over the city. Zelli started the Royal Box at Rue Fontaine in 1920. The establishment was previously known as La Feria. Established in 1912 by Spanish guitarist Amalio Cuenca, the club had been instrumental in stoking the craze for tango and flamenco in the pre-war era.

Zelli’s club had a rectangular dance hall in a Spanish-Moorish style with a bandstand, ornate pillars, and mirrored walls. A balcony overlooked the dance floor. Set along it were the ‘royal boxes’ from where patrons could observe the goings-on below. Each box had a telephone enabling customers to communicate with each other. Zelli engaged Eugene James [Jacques] Bullard, a former boxer and the first African-American to serve as a pilot during the war. Between 1922 and 1924 he played drums for Zelli’s Zig Zag Band, managed the club’s musicians, and booked entertainers for the cabaret. He also called in the help of a lawyer friend to secure that Joe obtained a licence to stay open through the night.

As other cabarets closed at twelve, Zelli’s became Montmartre’s most celebrated nightclub, the final stop on a tour of hot-spots in the district. Drink of the house was champagne, served by the bottle only. The club closed after serving breakfast in the early daylight hours. Patrons included Ernest Hemingway, F. Scott Fitzgerald, and Cole Porter. It was a cosmopolitan crowd that gathered there, including many Argentinians who had settled in Paris. The club was also popular with French Surrealist artists. Louis Aragon incorporated memories of nights spent at the club in his novel Aurélien. Malcolm Lowry referred to the night club in his film script for Fitzgerald’s novel Tender is the Night.

Born in 1900 in Palermo and having studied at the Academy of Fine Arts in his hometown, Vincenzo Maria Zito found himself employed by Ignazio Florio, owner of Grand Hotel Villa Igiea, overlooking Arenella beach. Zito added to the hotel’s entertainment by portraying its guests. On behalf of racing driver Vincenzo Florio, founder of the Targo Florio (an endurance car race in the mountains of Sicily), he created the first advertising posters. 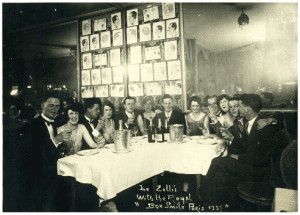 In 1927 Zito travelled to Rome and from there to Paris. He became a familiar face in the cafés and clubs, getting to know the in-crowd of writers, artists, musicians, and performers. He also ran into a fellow Parlermitan who named himself ‘count’ Giuseppe di Abatino. No aristocrat at all but a former stonemason, the latter was an intimate friend of Josephine Baker. As her manager (and lover), he transformed her stage persona and handled the business side of her shows. 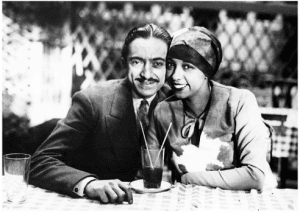 In Montmartre’s small world, Abatino most likely introduced Zito to Zelli’s club. Soon after, he was engaged in drawing caricatures of the stream of famous guests and visitors that dropped in there. His numerous sketches covered the walls of the club. Vincenzo’s original Parisian sketchbook has survived, containing over eighty superb caricatures of celebrities and notables, many of them signed by the subject. It captures the essence of the era’s popular culture.

For a while Joe Zelli and his French wife earned a fortune, but the Wall Street stock market crash was followed by a huge slump in travel across the Atlantic. Showbiz in Paris suffered badly. By November 1931 Joe had moved back to New York where he opened the Royal Box Club at 17 West 56th Street, one of the most lavish speakeasies of the time. Rumor had it that he was being bank-rolled by racketeer Owney Madden. The venture did not last long. After a few weeks the club was raided by the police, closed down, and stripped of its contents. Other attempts to make a new start failed, after which the name of Joe Zelli disappeared off the radar. Even his death was not reported. 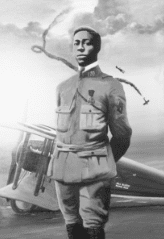 Zito had also returned to New York where he met up with legendary Sicilian Nicky Quattrociocchi, co-owner of the refined supper club El Borracho (‘The Drunk’) at 51 East 55th Street. Zito’s coloured sketches were highly appreciated by the circle of guests at this establishment. John Perona, patron of the nearby El Morocco club (his clientele included Errol Flynn, Marlene Dietrich, and Clark Gable), was also an admirer. He collected many of the artist’s original caricatures. Zito would later settle in Palm Beach where he gained a reputation as a portrait and mural painter.

Joe Zetti’s idea of covering the walls with caricatures of esteemed visitors lived on in Sardi’s establishment at 234 West 44th Street in Manhattan’s theatre district. The restaurant was founded in 1927 by Vincent Sardi (Senior), an immigrant from Piedmont who had left Italy at the age of twelve to live with relatives in England. He attended school there and was trained in a hotel. He then moved to New York.

In 1921, Vincent took over a basement eatery in a ‘brownstone’ townhouse at 246 West 44th Street. He named it the Little Restaurant but his clients called it Sardi’s, and the name stuck. The family lived upstairs. When the building was razed in 1927, the business moved to its current location. Nicknamed the ‘Mayor of Broadway’, his son Vincent turned the establishment into a theatrical institution with discount menus for actors engaged at local theatres. After the 1946 death of Antoinette [Tony] Perry, founder of the American Theatre Wing, her partner Brock Pemberton was having lunch at Sardi’s. It was there that he launched the project of creating an award in her honor. For years the restaurant was the place where the Tony Award Nominees would be announced. At the first ceremony in 1947, Sardi (Senior) was given a special award for providing a “transient home and comfort station for theatre folk.” 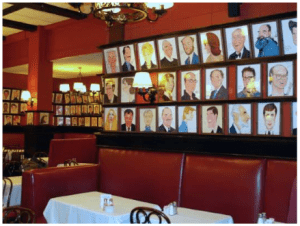 Caricaturist Alex Gard (born Alexei Kremkov) left his native Russia after the Bolshevik Revolution and settled in Paris where he drew cartoons and caricatures for newspapers and magazines. He moved to New York in 1924 where he was a contributor to The New Yorker and the Sunday drama section of The New York Herald Tribune. He was also involved in the creation of painted theatre sets.

In 1926, Sardi hired him to draw caricatures of Broadway celebrities who frequented the restaurant. The contract stipulated that Gard would produce images in exchange for a solid meal every day. He continued sketching until his death in 1948, ultimately creating more than 700 pictures. In 1979, Sardi donated a collection of 227 caricatures from the restaurant to the Billy Rose Theatre Collection at the New York Public Library for the Performing Arts. Following his death in 2007, the lights on Broadway briefly dimmed in his honor.

Illustrations, from above: Annibale Caracci, pen and ink sheet of characters, c. 1595 (British Museum); caricature in ink of Antonio Vivaldi, by Pier Leone Ghezzi 1723; Vinzenco Zito, caricature of Joe Zelli at the Royal Box; signed by Zelli; The Royal Box in 1927; champagne by the bottle; Zito’s caricatures on the wall; ‘Count’ Giuseppe di Abatino and Josephine Baker; Eugene James [Jacques] Bullard, the first African-American pilot in war action; and Caricatures at Sardi’s.