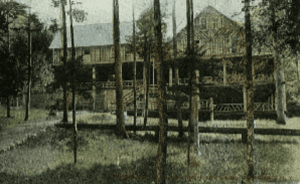 I am a fourth generation Sherry owning a camp on Twitchell Lake in Big Moose, NY, in the Adirondacks. with my wife Ingelise. We share ownership of “Little Beaver” with my three brothers and their wives. Four diaries from our second generation have helped to solve the mystery of how the family first came to Twitchell Lake. It turns out it all started with a love story!

The setting for this story is Earl Covey’s Twitchell Lake Inn built in the late 1890’s in what is called “the Gilded Era,” a period of rail transportation into the heart of the Adirondack Mountains which brought waves of tourists. This was the era of the Great Camps – the Covey Inn fitting that category with its 18 bedrooms, its porches, dining area, and Great Room. The Gilded Era is also recognized by those beautiful Victorian wide-hooped skirts and sleeping cars for travelers.

My grandfather Norman Burt Sherry was heir to a large grocery business in Troy, NY. He was son of an Irish immigrant who went “from rags to riches” by the time he died in 1894. Norman’s three Diaries (1908, 1921, and 1926) speak to his personal qualities. Norman was a man driven by his father’s expectation that he take over the family business. He was conflicted, his father squashing his dream of attending college. He was devout, an Elder and popular Sunday School teacher in Troy’s First Presbyterian Church. He was loyal, an active member of the Williams College Alumni Association, the college he graduated from after his father’s death. Norman was enterprising, a regular participant in Troy Rotary and Chamber of Commerce. And he was engaging, well-liked by all who knew him – an eligible bachelor.

The Sherry family tree begins with an Irishman named Arthur (1799-?) who emigrated with his young wife and five children to Montreal in the 1830s, looking for a new life after several appearances in bankruptcy court. They stopped in England for Liza to give birth to their sixth. His eldest died of typhoid in the crowded Irish ghetto, followed by another tragedy- the loss of his wife probably in childbirth of their seventh. Arthur’s surviving children were put up for adoption and he literally disappeared from known genealogical records. John Sherry (1824-1894), one of the seven, took an apprenticeship in a tailor shop in Troy and worked his way up as a grocer to a multi-million-dollar business by the time he died in 1894. Squires, Sherry & Galusha’s wholesale territory covered much of the Northeast. John married an orphan and became the caretaker for the surviving members of his family.

First Presbyterian Church of Troy appointed John an Elder and sent him to plant a church in North Troy, where a young protégé named Robert Ross was shot in the head while protesting voter fraud (A Martyr of To-Day: The Life Of Robert Ross, Sacrificed to Municipal Misrule, 1894). John mentored his nephew James in a company sales job and tried to help him overcome his “love for rum.” The Troy headline announcing James’ suicide in 1882 suggested that several other members in the family tree met a similar fate. John is remembered in histories for having given the city one of its first public parks, six-acre Beman Park bordering Rensselaer Polytechnic Institute. Norman had many reasons to be proud of his father John, and John had great expectations for his youngest child Norman.

My Grandmother Lucretia Carolyn Hayes was a Buffalo gal, raised in a loving family of medical doctors. Lucretia kept a Diary in 1895 at age 15, in which she can be seen as developing into a young lady who was talented – an accomplished singer, piano player, and student leader; sporting – a competitor at tennis, backgammon, and horse-back riding; resourceful- she could mend socks and sew a dress; independent – she took the trolley and train from Buffalo to Lockport to visit friends and family; spiritual- attending her Christian Endeavor club and summer revival meetings; and fun- an avid rider on “the wheel” or what we call the bicycle. In short, she was becoming a real “catch” for the right gentleman.

The Hayes family tree has Lucretia in a supportive family whose father Francis Mason Hayes (1853-1916) was one of the key doctors in a three-generation medical practice specializing in the treatment of the lungs. The founder of that dynasty was Pliny Harold Hayes (1824-1894), Francis’ father, related to the nineteenth President of the United States, Rutherford B. Hayes.

Pliny Hayes pioneered “the Hayes Method” for treating asthma, allergy, and hay fever used to treat people all over the world. Among their patients were President Calvin Coolidge, British and French authors Ernest Hornung and Marcel Proust, and Austrian composer Arnold Schoenberg. Three other members of this Buffalo practice were Harold Augustus Hayes, John A. Hobbie, and Lucretia’s brother Pliny Harold Hayes II. As a family of means with four summer homes on the Niagara River in Lewiston, the Hayes were known for community service through their Congregational Church of Buffalo, with Pliny I serving a tour as medical missionary to a Canadian Indian tribe and with all family members involved in local and State philanthropies. Lucretia had a close extended family that nurtured her hopes and dreams.

Norman and Lucretia had a very supportive “cast of characters” among their family and friends. For Lucretia that included her best friend Julia Michaels, school mate Agnes Meyer, and summer pal Carrie Rogers, as well as her family – Papa Francis Mason and Mama Ellen Lucretia Hayes with three brothers – Pliny Harold, Frank, and Roger. Norman’s “family and intimates” included two Williams College buddies who became lifelong friends – Clifford Black, proprietor of a New York City jewelry store, and Bert Montony, a Troy native. With both parents deceased, Norman’s older brother Arthur and sister Charlotte were his nearest kin, Charlotte’s daughters Sara and Amy Raymond being very close. He visited his Aunt Cynthia, his Uncle James’ widow, on a weekly basis. Norman adopted the Ross family as lifelong friends after the killing of their son Robert in 1893. And then there was his brother-in-law Charles Raymond, a key link in this love story.

There is something more you need to know about Norman, two things actually: His obituary described him as a real people person:

Norman served in leadership roles with more church, business, college, and community organizations than I could list on a page. I think part of his problem was he was just too busy to properly court a lady.

And one more thing. His diary entries for January 12 and 17, 1908, speak of an “exile” he hoped to be “delivered from.” He does not explain it, but I think I know what it was. As a man of God, he was on the verge of making a vow to the Lord to accept the gift of celibacy, mentioned in one of Paul’s New Testament letters (First Corinthians 7:7). Norman was 37 years old and had not found a life mate. He appears to be musing about the real possibility that the Lord was calling him to be celibate, and whether it was too late for him. This contributed to his inner conflict.

Some additional background on Lucretia is necessary, too. I cannot tell you when she first stayed at the Twitchell Lake Inn, but I think I can make an educated guess. On May 29th of her 1895 Diary, she said “Mama, Papa and Frank went to the Adirondacks today,” not explaining the purpose of the trip or the destination. Then on October 19th she described a Hayes family outing south of Buffalo at a trout preserve “of which Papa owns a part.” Putting these entries together, it is quite possible that Harold and Ellen took the Adirondack train to Big Moose for its famous trout fishing and connected with the Covey family. For by the time Earl Covey’s Inn at Twitchell was keeping a guest book, the Hayes were annual summer visitors, as documented by the guest register for the 1907 season shown here.

Norman’s brother-in-law Charles Raymond graduated from RPI in Troy and went on to work as a Civil Engineer with several factories powered by the Erie Canal in Lockport, NY. At age 47 he became engaged to a colleague’s daughter, Carrie Rogers, with a June 11th wedding set in 1906. Chas had made a name for himself not only in waterpower but also as pioneer of “The Sidepath Movement,” an early effort to create a network of trails for bike riding (“Pioneer Work at Lockport, NY” in Cycle Paths: A Practical Handbook, 1898). Norman traveled from Troy to attend the wedding of his accomplished brother-in-law where he was introduced to four beautiful ladies, the bride and three of her summer friends, Julia Michaels, Agnes Meyer, and Lucretia Hayes.

Norman spent most of the reception talking to the outgoing member of that group, Agnes Meyer. She was “the life of the party.” They agreed to exchange letters and write they did! Norman saved each of her frequent posts. Norman had real expectations with this exchange of letters, remembering his visit with an elderly member of his church, a Miss Sherman. For as he noted in his 1908 diary, three years earlier she had shared with him “her strange vision of a girl for me” (July 12). Norman never forgot that and was uncomfortable with this notion of “exile.”

In late May of 1907 Norman received an invitation to another wedding scheduled for June 18th in Auburn, NY, south of Syracuse. Lucretia’s brother Pliny Harold Hayes was to be married to her good friend Agnes Adelaide Meyer- the woman Norman had been exchanging letters with for almost a year. Norman was crushed. “Lord,” he questioned, “does this mean I am going back into exile?” He was running out of women and opportunity. And while he may have entertained declining the invitation, he made the trip. After all, through their correspondence Agnes had become a good friend. At the Auburn reception, Norman sat with and talked a lot to Harold’s sister Lucretia, more reserved than Agnes, but very interesting to converse with. They agreed to exchange letters and write they did.