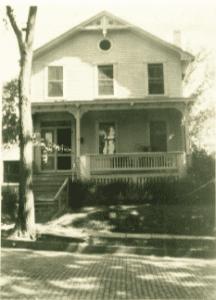 This is part three of this series A Twitchell Lake Love Story – part two can be found here.

After their marriage, newlyweds Norman and Lucretia Sherry moved into their first home. They brought four children into the world – Elizabeth (1910), Francis (1911), Norman, Jr. (1913), and Esther (1918). Lucretia (Lu, as she was called) had her piano shipped from Buffalo to Troy, filling their home with music and hymns, and teaching her children the keyboard.

Lu moved her membership from her Congregational Church of Buffalo to First Presbyterian, Troy, putting her teaching gifts to work and joining Norman in his Elder role of visitation and care for people. Norman’s grocery business to “Sherry & Company” grew rapidly, requiring more of his time. In his 1926 diary, Norman spoke with fatherly pride of his daughter Betty’s first fraternity dance, Frank’s Eagle Scout achievement, Norman, Jr’s, First Communion, and Esther’s progress in overcoming a disability affecting her ability to walk.

Vacations at Twichell Inn in the Adirondacks continued too, now connecting the Buffalo and Troy branches of the family. The Sherry newlyweds and all the Hayes show up in the Twitchell Inn logbooks for each summer. Francis and Ellen became good friends with Earl and Addie Covey and with all the early campers on Twitchell Lake. Tragically, Ellen lost her 63-year-old husband Francis to lung disease in 1916, a real blow to this growing family. Ellen Lucretia Hayes was an amazingly strong woman, taking delight in introducing her children and grandchildren to her beloved Twitchell. She was determined not to lose this precious gift, so in 1919 she purchased Lots 143, 144, and 145 across the lake from the Inn, contracting Earl Covey to build a permanent log camp for the Hayes and Sherry’s on Twitchell Lake.

Earl Covey used his legendary half-log pine construction to build this beautiful two-story camp with four bedrooms to host Ellen’s growing family for the summers. Two of Covey’s signature granite fireplaces graced the first floor, one in the living room and the other in the bedroom she planned for herself off that great room. A large porcelain woodstove is still present in the kitchen of this camp, currently owned by Ed and Shirley Szekeres who have kept it in pristine condition. 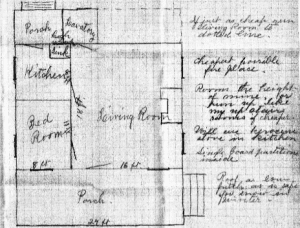 Almost immediately Ellen realized that five bedrooms would not accommodate Buffalo and Troy family and friends, so she wrote Earl Covey with plans for a guest camp on Lot 145 to the west. She sketched out a floor plan and negotiated a price of $2,000. She offered comfort on the recent loss of his wife Addie and confided in Earl on why a widow at 68 years of age would undertake such a big project:

“Though I understand how lonely you will be, you still have quite a family to look out for and as you stay keeping busy helps. That is just why I planned the camp. I just had to have something of my own to look after. You will be as I am more & more thankful that you have such nice children. They are a comfort.” 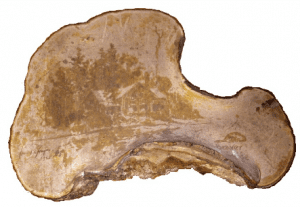 Ellen Hayes celebrated the completion of Beaver Lodge and Little Beaver with her whole family. That occasion was memorialized by a skilled sketch of the main camp on a fungus by her son Pliny Harold II, signed “Harold 2 Hayes, 1921.” It was called “Beaver Lodge” because of the beaver house located on the shoreline, just to the left of the camp. Norman’s 1921 Diary recorded many details about this family celebration made possible by the foresight and vision of his mother-in-law, Ellen. Now Ellen had a place of her own on Twitchell Lake, and it became a blessing to her circle of family and friends in Troy and Buffalo.

As a woman of means Ellen Hayes could have done anything she wanted to in her senior years, but it was her love for Twitchell which shaped her legacy in three ways – keeping her Troy and Buffalo family together, forming lifelong friendships with Twitchell camp owners, and fostering a love for the Adirondack wilderness in the second and third generations. In 1923 she transferred ownership of the two Beaver camps to Lucretia whom she resided with in Troy. This picture depicts Frank and Norman, Junior – Norman and Lu’s two boys – out for a row on Twitchell Lake in the summer of 1923. Norman’s 1921 Diary described a host of activities that helped to pass this legacy on:

“May 14, tramped around lake to Brownell’s hotel & climbed Lookout Mtn for marvelous view of lake… July 4, the children had fireworks display at the dock, Norman, Jr., falling in water in the excitement… July 24, Lu met with “Builders” club she formed to help occupy and train the children on Sundays… July 31, Lu & I took children to the Brownells, getting tours of 3 camps on the way, then hymn sing at the Inn in the evening.”

In an August 6th entry, Norman described the first campfire to which they invited lake friends and Inn guests:

“We cut up brush & collected wood for the fire off & on all day. Set up the fourth board seat. Kids had a swim in Pm. We invited many campers on the Lake & guests at the Inn to our first Campfire in the place & amphitheater prepared. Chas had superintendence building of the “pyre” & it was a big & fine one. The slanting space cleared was well adapted to the crowd. Counted 15 boats or canoes which we stored or “parked” near the dock. Served popcorn & lemonade. Lucretia counted 62 persons, incl. our 2 camp families.”

Every love story has tests and challenges, and this one would be incomplete without a brief account of the stress that Sherry & Company brought to Norman. The family spent every summer at Beaver Lodge with Ellen Hayes, Norman’s visits limited to opening and closing the camps, and a two-week vacation mid-summer. Rapid economic changes in the late 1920’s which led up to the Great Depression, brought a sharp challenge to company plans, with unexpected losses of revenue. Here is a summary of some of the highlights and milestones for Sherry & Co.:

• Incorporated in 1914 with a large Troy retail store and wholesale sales team from PA to NH
• Hired a nationally known coffee expert to develop his own coffee brand, doubling annual profits
• Met with Piggly Wiggly execs to discuss “supermarket idea” of customer picking out own food
• Led national committee opposing food taxes and notion that “coffee is bad for your health”
• Adopted new technology for grinding and packaging food, per “Dunn’s Pure Food & Drug Legal Manual”
• Hired a consultant in 1926 to advise on bank restrictions, mergers, and sweeping market changes
• Wrestled with his faith and business calling, working through a book titled Conquest of Fear
• Tried to heed Lu’s counsel on simplifying the product line, with daily exercise to reduce stress 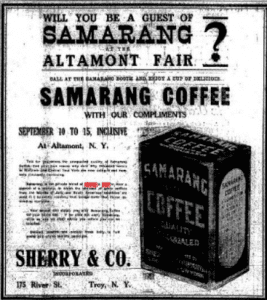 The bottom line was this: Sherry & Co. was eating him up! His only real rest and recreation came from his Twitchell Lake visits with daily swims, frequent tramps, and tender care for his four growing children. It all came to a head on a canoe ride with Lu one summer evening in 1926 after admitting to her he had been at the office until midnight every night of the previous week:

“Aug 31- Out in boat with Lu aft. supper; inventory results talked over in tenseness.

“Sep 3- Lu talked to me before breakfast, in cooperation & everything is changed for me, the “cloud” between us is dissipated.”

The illustration below shows two pages from Norman’s September 1926 diary which is blank on the 15th, just nine days before Lu’s birthday. He died September 17th during the night at age 55:  “Norman B. Sherry, prominent resident of Troy and president of the firm of Sherry and Company, Inc., was found dead in bed this morning at the home of his nephew, Alden B. Sherry in Syracuse.”

The cause of death was recorded as a massive heart attack. This love story ended with Lu and his four children in shock, not to mention Norman’s company, church, and friends at Twitchell, in Troy, and Buffalo. This tragic news appeared across front pages of New York papers from Troy to Buffalo. My Dad, Norman, Jr., was 13 when he lost his father. I never met my Grandfather, but my reading of his 1908, 1921, and 1926 diaries – which Lu kept in her possession – has helped me to appreciate the enormity of this loss. 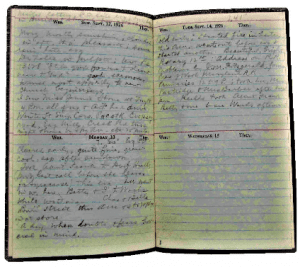 I did know my Grandmother Lu, and this lovestory-cut-short has led to a deeper discovery for me. Like her mother Ellen, Lu loved Twitchell Lake and was determined to bless her family with all it gave to her. This year is the 100th anniversary of the two Beaver camps. Ed Szekeres and I have copied and studied the 18 names on the 16 deeds that exist for the three Twitchell Lots Ellen purchased in 1919 from Patrick Harney.

We are still trying to make sense out of the complicated timeline for these transactions. But one thing is certain: Through deep personal loss, two World Wars, and the Great Depression, Lucretia Sherry somehow held on to enough land on Twitchell Lake to pass on this second “love story” to her children and grandchildren. In 1953 she sold Little Beaver to my father and mother, who in turn passed it on to us in 1994.

Six generations have now been able to experience what the first two were attracted to: A love for trout fishing, wildlife, wilderness scenery, quiet, fresh air, brilliant starry skies by night, and so much more. First generation Francis and Ellen Hayes initiated this Twitchell legacy, with Norman and Lucretia and the rest of the second generation all helping to establish it. Our family photo albums display pictures like these, of young boys and girls learning to row a boat. These two pictures feature my brother Tom and I on the left and our cousins Marilyn and Ann Hodges on the right. The legacy and love story of Little Beaver continues, with 5th and 6th generation names too numerous to mention.

Now I know how and why we Sherry’s came to Twitchell Lake in the Adirondack Mountains. My title has a double meaning, with a deeply personal love story so profound that it has generated a second one – a legacy and love for Twitchell lake. Reflecting back over my watch, I can say with pride that we have been inspired by it, renewed by it, and recharged by it. We have photographed it, painted it, filmed it, and set it to poetry. We have honeymooned here, celebrated milestones, and created family memories here. We have taught our children to fish, swim, and make a fire here. We have spread the ashes of loved-one’s here. Lifelong friendships have been formed. And now one of the most challenging tasks of all as we contemplate together how to pass it on again.