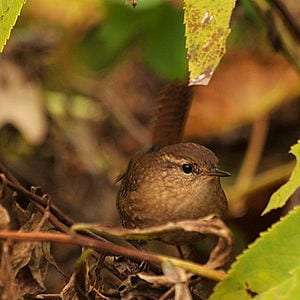 Spending time outdoors in the Adirondacks during spring is a rewarding experience, as the sounds that emanate from our forests, especially in the early morning, are sure to delight.

While the musical calls produced by most birds are relatively short and composed of only a handful of notes, there are a few songs that are considerably longer and more complex.

The lengthiest and most intricate song that commonly graces our woodlands is one heard in patches of mixed forests where dense clusters of undergrowth or ground debris exist on the forest floor. This fast tempo melody is quite loud, yet comes from one of the smallest birds to nest in the Adirondacks – the winter wren.

Being slightly smaller than a chickadee and supporting brown plumage over its entire body, the winter wren is difficult to notice against a background of dead leaves, twigs and tree bark. Additionally, this bird’s knack for retreating into the nooks and crannies in a tangled mass of fallen trees, a cluster of large rocks covered with brush, or the new growth sprouting from the ball of soil elevated by an uprooted tree makes this wren a challenge to spot.

On those occasions when it is glimpsed, the winter wren can be easily identified by its long and slender bill and the manner in which it holds its stubby tail upright. However, the winter wren is heard far more often than it is seen. The song of this bird lasts for 8 to 9 seconds and is said by sound analysts to be composed of over a hundred notes. While various phrases have been developed to represent the calls of most birds, no verbal device could be formulated to describe the call of the winter wren. The rapid pace at which the wren bellows out its series of notes makes its song impossible to translate into a phrase to help a person recognize it.

It also has been determined by researchers that this wren adds to the length and complexity of its song as it gets older. Many species of birds living in a specific geographic region are known to produce distinct fluctuations to the tone of the notes that compose their songs, thereby creating unique dialects. This is also the case for the winter wren as the melody of this songster varies slightly depending on the region of the country in which this bird lives. However, along with its dialect, the relative age of a winter wren may be assessed by a sound expert, as well as any female wren living in the immediate area, based on its vocal skills and talents.

Along with announcing its presence to potential mates, the male spends some of its time constructing the framework of several nests within his territory. These structures are often tucked away in the crannies of various piles of debris on the forest floor. Once a female elects to claim one of these partially completed structures, she then adds a layer of soft bedding material to the framework to prepare the future nursery for her eggs. While the male assists the female in the various chores associated with nesting, he does not form a lasting bond with her. As soon as the nestlings have learned to fly and find food for them, the male abandons the female and may breed again with a different female that has wandered into his territory.

The preference of this wren to nest, rest and occasional forage in cubbies, grottos, and other similar enclosures near the ground makes this bird function more like a mouse or vole than a bird. By spending a fair amount of time in sheltered places, the winter wren is not as adversely impacted by periods of unseasonably cold spring weather as birds that concentrate their time exposed to the wind in the canopy. This permits the winter wren to arrive in the North Country fairly early in the spring just after the snow has melted despite the cold that still regularly occurs in the early spring.

There is an abundance of bird sounds, along with the noise from peepers and a few other amphibians currently reverberating across the landscape. With the reemergence of black flies and other insects, the Adirondacks can now support a healthy population of birds that are genetically programmed to begin breeding with the onset of bug season. For these feathered creatures, singing is the most common way of attracting a mate, yet no species is as adept at announcing its intension to reproduce as the tiny winter wren.