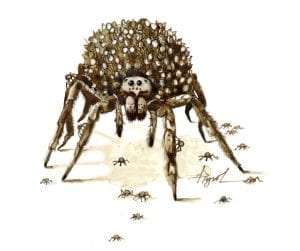 This May, while we thank the human moms around us, I’ve been thinking about the many dedicated moms throughout nature, too. Nurturing mothers come in many unexpected shapes and sizes, including a few diminutive examples – like spider moms.

All spiders lay eggs and wrap them with silk into some kind of egg sac. Most spider species wrap their eggs completely, making a tidy bundle, but some spin just a few threads that barely hold their egg clutches together. Egg sacs are often distinctive in color and shape and can even be used to identify a species. More elaborate egg sacs might comprise multiple layers of wrapping, including extra tough silk or colored silk, or even incorporating soil or sticks. For most spider mothers, finishing an egg sac is where their parental duties end. But for some, the parenting journey is just beginning.

Mothers from several diverse and widespread spider families guard their egg sacs from predators and parasites. Some even look after the baby spiders, called spiderlings, for a time after they hatch. Egg sac guarding is an important maternal commitment, because spider eggs can be a tasty morsel for other invertebrates. An entire subfamily of wasps specializes in parasitizing spider egg sacs. A female wasp will lay her own eggs inside the spider’s silk egg wrappings; when the wasp larvae hatch, they munch up all the spider eggs.

One family of spiders with protective mothers is crab spiders. Named for their habit of holding their front legs in a crab-like pincer position, many species in this family perch high on vegetation to ambush flying insects. A personal favorite is the goldenrod crab spider, a spider with orangey-red stripes on its abdomen that can change its color from white to yellow. I once watched a crab spider guard an egg sac tucked into a curled leaf on one of my ornamental trees. She sat vigil next to her egg sac and would turn to face me if I ventured too close, keeping a wary eye on the perceived intruder. Over the course of a couple weeks I would peek in on her every few days, until the day all the tiny spiderlings came out and ballooned away.

A few spiders take their mothering a step further and will carry their egg sacs with them, then care for their newly hatched spiderlings. Wolf spider mothers carry their egg sacs on their spinnerets, the organs on the end of their abdomen that make silk. I frequently see these brown roving spiders in my garden, often with a spherical white egg sac snugly attached to their back ends. Carrying their egg sacs this way, however, isn’t always a very effective guarding strategy; when researchers hatched these egg sacs in the laboratory, they found a large percentage had been parasitized by wasps.

Wolf spiders aren’t the only ones who carry their egg sacs. Cellar spiders, the ubiquitous spindly brown spiders that spin cobwebs in dusty corners, carry their loosely wrapped eggs in their jaws. These mothers sometimes host their spiderlings in their web after hatching. Nursery web spiders carry their egg sac by mouth and build their spiderlings nursery webs. When the spiderlings are ready to hatch, their mom will find a structure, often a leaf, and spin a silk tangle under it with the egg sac at the center. She stands guard for over a week until the spiderlings go through a post-hatch molt.

From egg sac guarding to piggy-back rides, spider mothers do their best to give their spiderlings a safe start in life. The next time you see a crab spider perched in a flower, or a wolf spider traipsing through the garden dirt, stop and look closely, she might be guarding an egg sac in a nearby curled leaf or carrying her babies on her back.

Rachel Mirus lives and writes in Duxbury, Vermont. The illustration for this column was drawn by Adelaide Tyrol. The Outside Story is assigned and edited by Northern Woodlands magazine and sponsored by the Wellborn Ecology Fund of New Hampshire Charitable Foundation.