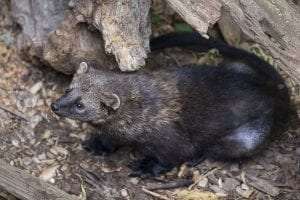 Over the past decade, the number of fishers taken by trappers has declined in the Central Adirondacks, and since the harvest is often proportional to abundance, there is a believed to be a population decline in this area as well.

Fishers wearing GPS- and VHF-enabled collars are are being tracked in the Central Adirondacks and, for comparison, across Tug Hill where there has not been evidence of population decline. DEC biologists trapped and collared fishers over the winter.

Cunningham lives in Syracuse and does the tracking in the Tug Hill area of Northern New York. “We want to get an idea of productivity and survival differences between fisher populations in the Tug Hill region and Central Adirondacks,” she said.

Fishers have their kits in tree cavities making them difficult to find for the first several months of their lives. GPS collars on adult females provide researchers with specific point locations to help identify the dens.

Once the dens are found, Cunningham said a circular set of trail cameras are set up allowing researchers to see the kits when the mother moves them to a new den, which she is expected to do three to five times over the next several weeks.

“Having cameras in place allows us count how many kits each female has during each move, providing information on cub survival and recruitment. The mothers will move the dens periodically throughout the first three months of the kits’ life,” she said, most likely to protect the kits from predators and harsh environmental conditions.

“For the rest of the animals with VHF collars — juvenile females, and all males — we are monitoring them to assess survival rates,” she said.

By comparing demographic rates, survival and productivity, between these two areas that have similar environmental conditions (for example terrain and snowfall) but different ecological conditions in terms of prey, competitors and harvest pressure, researchers hope to determine what is driving the perceived population decline. This information will then be used to inform effective management practices.

Fishers, which inhabit a unique ecological niche as a predator of porcupines, are trapped for their fur.

“One of the questions we’re looking at is ‘are they being over-harvested,’” said Cunningham. In some areas of New York state the population has expanded and is doing well, but in the Central Adirondacks the DEC has noticed the number of animals trapped per unit effort is declining, so something may be affecting the population there.”

Cunningham is estimating the survival probability of the kits and then of all the adults and juvenile fishers that were collared.

“We’re going to be doing that for the next several years to acquire sufficient data to estimate survival and productivity,” she said. She will then use statistical modeling to investigate drivers of changes and possible differences between study regions. The demographic rate estimates will contribute to a larger collaboration assessing fisher ecology and population dynamics in New York State.