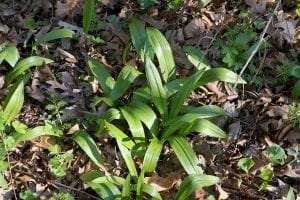 The Rangers say they witnessed numerous individuals with packs and bags full of ramps throughout the day and determined that they were not intended for personal consumption.

The individuals did not have a DEC permit. Two tickets were issued for depositing trash on State land, six tickets for defacing, removing, and destroying plants on State land, and one ticket was issued for violating the penal law on State land. Forest Rangers seized approximately 100 pounds of ramps that the officers reported they offered to local food banks.

In New York State, it is legal to harvest ramps on state land for personal consumption (with the exception of a sub-species found in Chautauqua County).  Conservation groups recommend limiting the harvest to 5% of a patch, and only taking the greens and allowing the bulb to remain. Read more about ramps at North Country Public Radio.