What follows is a report, prepared by DEC, of recent missions carried out by Forest Rangers.

Town of Long Lake
Wilderness Rescue: On May 6 at 12:01 am, Hamilton County 911 contacted DEC’s Central Dispatch following an alert from a Garmin Emergency Beacon from two men camping on Forked Lake. One of the men was experiencing dizziness and loss of equilibrium. Coordinates provided by 911 indicated the men were in a lean-to on the southwestern side of the lake. Forest Rangers Melissa Milano and Jason Scott responded to the location and provided first aid to the ailing man. Rangers then walked the 65-year-old man from Averill Park and the 66-year-old man from Delanson out of the woods to a road where the ill man was transported to a local hospital for additional medical treatment. Rangers were cleared of the scene at 2:22 am.

Town of Moreau
Wilderness Rescue: On May 4 at 3:30 pm, Saratoga County 911 transferred a call to DEC’s Ray Brook Dispatch from two female hikers in Moreau State Park who called for assistance after taking a few wrong turns trying to get back to the trailhead off Old Saratoga Road from the summit of Grant Mountain. Dispatchers obtained coordinates that placed the hikers on the west side of the mountain when they should have been on the east side. The 22-year-old from Mechanicville and 23-year-old from Gansevoort were directed to remain at their location until help arrived. Forest Rangers Joe Hess and Tony Goetke responded to the hikers’ location along with New York State Park Police, who had also received a call and were heading to assist. At 5:08 pm, Dispatch received notification that Park Police located the hikers and were walking them out to the trailhead. 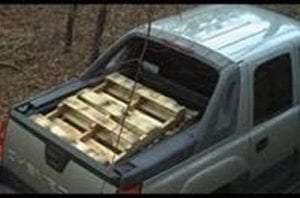 Town of Riverhead
Bonfire Debris: During the first week of May, Forest Rangers John Gagne and Scott Hicks began investigating a bonfire site at the Peconic Headwaters Natural Resource Management Area and stepped up patrols in the area after several wildfires. The Rangers discovered evidence of a previous fire and fresh wood pallets being collected for a future fire. During an evening patrol on May 9, Forest Ranger Gagne discovered a vehicle transporting more wood pallets to the site. With assistance from DEC Environmental Conservation Police Officer (ECO) Taylor Della Rocco, the officers issued a total of five summonses to four individuals for trespassing on State land without a permit and operating an unauthorized motor vehicle on State land. Rangers ordered the offenders to properly dispose of the waste and clean the site. In addition, the Forest Rangers notified the offenders that all tickets for dumping in the Pine Barrens are being held pending confirmation that all waste materials are removed, and the site is restored to pristine condition. 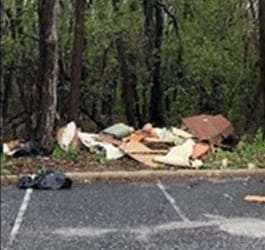 Town of Brookhaven
Dumping Enforcement: On May 1, Forest Ranger Scott Hicks discovered a large pile of home renovation debris on the outskirts of the Rocky Point Natural Resource Management Area, adjacent to a shopping center. Using information gathered by the Suffolk County Pine Barrens Law Enforcement Council and a document discovered by Forest Ranger John Gagne, the team identified a possible suspect. Upon further investigation, Forest Ranger Gagne and ECO Taylor Della Rocco obtained a confession from one of the alleged suspects. On May 10, Forest Rangers Hicks and Gagne charged the responsible parties with dumping in the Pine Barrens and dumping on state land, and ordered the subjects to clean up the debris and dispose of the materials in accordance with the law.