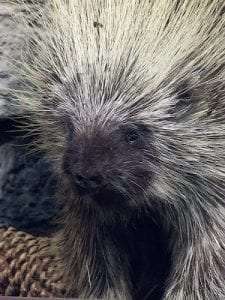 As the buds on hardwood trees and shrubs open and New York State’s forests again are cloaked in green, they provide our many herbivores with a welcome change in their diet.

While many plant eaters are able to subsist on woody buds and cellulose laden layers of inner bark throughout winter, leafy matter provides far greater levels of nourishment. The porcupine, a common denizen of the forest, is among our first order consumers of greens when they emerge in spring.

In winter, the porcupine settles into a routine of eating only the bark and needles of a very few species of trees in the area around its den. The stomach and small intestine of this rodent contain strains of microorganisms that act on this ultra-high fiber material in order to derive the energy needed to remain alive in this climate. Yet the limited amount of nutrients, particularly nitrogen, in such plant tissues makes this type of food less than ideal for maintaining a healthy diet. Despite ingesting large volumes of woody matter each night in winter, the porcupine often loses weight continuously.

Even though it has various adaptations to help it conserve the nitrogen in its system, the porcupine still suffers from a lack of the proteins that form the basis of all living tissues. During years when spring comes late, some individuals may eventually die of malnutrition because of their dwindling amounts of nitrogen, even as they fill their stomach with woody edibles whenever they forage.

As buds begin to open in spring, exposing young, tender foliage, the porcupine quickly seeks these out. With its exceptionally long and sharp claws adapted for clinging to trees, this chubby, quilled quadruped ascends into the crowns of various hardwoods and ventures out on the limbs in order to access as many emerging leaves as possible.

The abundance of plant proteins in these new leaves helps the porcupine rebuild old, worn-out tissues in its body. It is during this period in spring that the weight of the porcupine finally begins to increase again.

As leaves more fully develop, they begin to form certain chemicals that discourage herbivores from eating them. This is the plant’s means of defense in maintaining its food producing structures. As the initial, light green foliage transitions into the deeper green of mature leaves, the highly sensitive taste buds of the porcupine direct its intake of foliage to younger leaves.

As the porcupine’s diet reverts to leafy matter, certain chemical reactions in its digestive system trigger a depletion of sodium. Other forms of wildlife that have a similar woody diet in winter and switch to leafy matter during the growing season also experience a comparable loss of sodium in their body.

For example, both white-tailed deer and moose increase their intake of salt in summer in order to compensate for the loss of sodium throughout the warmer months of the year. Along the side of major roadways, where road salt is used excessively throughout winter, may also contain enough salt residue in spring to attract both deer and porcupine. By consuming forms of aquatic vegetation rich in this element, the moose is able to replenish its sodium level without the aid of artificial sources of salt.

Because it is equipped with a sharp gnawing set of teeth, the porcupine is able to chew on any object which contains a small coating of human perspiration. Wooden axe handles and canoe paddles that have been left lying on the ground are both known targets of this rodent. The trace amounts of sodium in the adhesives used in plywood is another sodium source that attracts the porcupine in summer. The porcupine can inflict occasional damage to various objects around a lean-to, campsite or cabin during the summer because of its craving for salt.