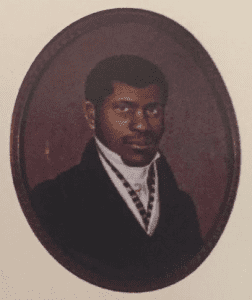 The three water color portraits shown here are hanging in Gracie Mansion, the official residence of the Mayor of the City of New York in Manhattan.  They are on loan from the New York Historical Society.

The watercolors (from the 1820s) are of the Toussaint family.

Pierre was born into slavery in Saint-Domingue (now part of Haiti) in 1766. He served in the household of Jacques Berard, who had Pierre baptized and educated by the family tutor. Berard brought Pierre and his sister Rosalie to the city of New York as a temporary respite from the chaos of the Haitian Revolution (1781-1804). 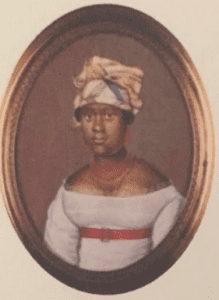 In New York, Pierre was apprenticed to a hair stylist and became one of most desired hairdressers of the city’s wealthy and fashionable women. The women in those days had mountains of hair so his success was quite a feat, and it’s said that he used to surprise them by putting flowers in their hair. He was paid well for his expertise, and was permitted to keep some of his wages. When Berard died, Pierre continued in the service of his widow Marie. Despite his wages paying the debts incurred by Berard, Pierre became quite wealthy in his own right.

Upon her death Marie Berard emancipated Pierre, who was then in his 40s. Toussaint then purchased the freedom of his sister and his soon to be wife, Juliette, who was also Haitian (shown in the second portrait).

He bought a house in Manhattan in 1811, married Juliette and adopted his sister’s daughter, Euphemia, after her death (the third portrait).  Unfortunately, she died at 14, probably of tuberculosis and Pierre and his wife were devastated by the loss.

Toussaint was an ardent Catholic, at a time when anti-Catholicism was rampant. He opened his home as a Catholic orphanage for African-American children and helped educate them and find them work. When a cholera epidemic struck the city, he attended the sufferers, rather than flee the city, as many did. As a devout Catholic, he helped finance the construction of the first St. Patrick’s Cathedral on Mott Street. 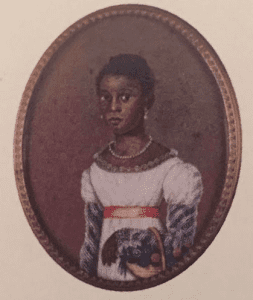 It’s said Toussaint went to mass every day for over 60 years. He aided black women in starting their own religious order, assisted Haitian immigrants, and is often considered an important founder of Catholic Charities in New York.

When he passed away, New York newspapers recognized what he had done for the poor and his religiosity. He was buried beside his wife and adopted daughter at the old St. Patrick’s Cathedral on Mott Street, where his headstone can still be seen.  Toussaint’s remains were later moved to the crypt in St. Patrick’s Cathedral on Fifth Avenue, the first lay person to be buried there.

In 1968, Cardinal Terrance Cooke supported the movement to canonize Toussaint. He was made Venerable in 1996 by Pope John Paul II, and although not yet named a Saint, some celebrate a feast day in his honor on June 30th.