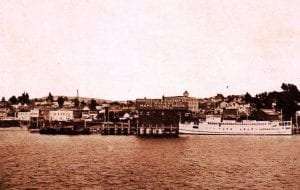 Most of these items offer little information about the company, and the average collector would have little reason to believe that one of the most well-known enterprises on the West Coast around the turn of the 20th Century had any connection at all to Sullivan County, NY.

Zepheniah and Charles Hatch, brothers born and raised in Sullivan County, founded the Monticello Steamship Company in San Francisco in 1895.

It wasn’t the brothers’ first foray into the lucrative steamship business, either. Zepheniah Hatch had operated a similar business in the Seattle area as early as 1891.

Zepheniah Jefferson Hatch — popularly known as Jeff – was born on his family’s farm on Forestburgh Road near Monticello in 1845, the second son of Cornelius Hatch. He attended the Monticello Academy and worked on the family farm until 1866, when he took a job teaching school in Ellenville. He taught there until 1870, when he went to work at the First National Bank of Ellenville.

But Hatch always believed that the western United States offered greater challenges and bigger rewards, so he soon resigned his position at the bank and, packing up the few possessions he had managed to accumulate, moved to Portland, Oregon.

Once settled in the Northwest, Hatch went to work first for the Northern Pacific Railway, and then for the Tacoma Land Company. He had developed a strict work ethic while growing up on the farm, and was not at all averse to putting in long hours. He began working in the steamship business as a dock hand and warehouse man, then as a ship’s captain, and finally as an agent, eventually building his own steamer, which he named the McCully.

From there, Hatch built his company at a furious pace, and before long he owned 33 ships, including a number of barges that ran north to the Yukon and to Alaska, hauling back south the valuable minerals then being mined there.

Still, he found time in 1882 to return to Sullivan County, where he married Adeline Tremain of Monticello. Following a short honeymoon, the new Mrs. Hatch joined her husband in the Northwest, where he was rapidly becoming one of the most noted steamship men on the entire West Coast.

In 1886, he operated steamers that ran the Columbia River and the Puget Sound between Olympia and Seattle. That enterprise hit a snag when a load of cement Hatch as delivering to an island in the river got wet during a heavy rain. The ship sunk alongside the dock when the cement swelled up and burst the hull of the ship. Hatch was financially strained but undeterred.

In 1891, Jeff and Charles, who by that time had also moved west, launched their pride and joy, a steamer named Monticello, which they had built with their own hands. The Monticello carried passengers and freight between Seattle, Port Townsend, and Port Angeles, Washington over the next four years, in the process becoming one of the best known steamships in the country.

The nationwide financial depression of 1893 took its toll on the Hatches’ business, though they fared better than most, and they were forced to disband the company. Instead of giving up their dream, the Hatches moved to San Francisco and used the money they had salvaged to launch the Monticello Steamship Company, with the aging Monticello as their flagship.

The company ran regular passenger ships between San Francisco and Vallejo, California, and added new ships as business increased. The most elaborate of these vessels cost more than $300,000 to build.

The Monticello Steamship Company flourished, always remaining one step ahead of the competition. Some years ago, a California historian wrote glowingly of the Hatches’ innovative thinking.

“Always looking for a way to improve their business, the Hatch brothers began coordinating their operations with the electric trains of the Vallejo, Benecia, and Napa Valley RR on July 4, 1905. The railroad was also known as the San Francisco, Napa Valley and Calistoga RR, or more commonly, the Napa Valley Line. Trains made connections with the General Frisbie at the Main Street Dock in Vallejo.

“In 1909, the Monticello Steamship Company added the Sehome to its fleet. With six daily round trips between San Francisco and Vallejo and four ships in service, business was good, but profits were not up to expectations, so other means were used to increase their cash flow. The company added concessions aboard their ferries, including bars, restaurants, barbershops, and shoe-shine stands.”

Through it all, it is said that Jeff Hatch never forgot his roots. He had one cardinal rule while serving as president of the steamship company: no one from his former home would ever be denied employment. The Monticello Steamship Company employed quite a number of former Sullivan County residents over the years.

Jeff Hatch died of kidney failure in 1913, leaving an estate of more than half a million dollars, including his interest in the steamship line. The Monticello Steamship Company remained in the Hatch family, with Charles taking over control. Jeff’s sons, William, Tremain, and Ferry, were also involved by then.

But the growing popularity of the automobile soon led to proposals to build bridges across San Francisco Bay, signaling the inevitable demise of the ferryboat business. Hatch’s sons sold the Monticello Steamship Company to the Golden Gate Ferry Company in February of 1929 for $2 million.

Photo of the sign on the building in the center of this undated photo of Vallejo, California reads: Monticello Steamship Co.- Wharf – Napa Valley Route – Depot.