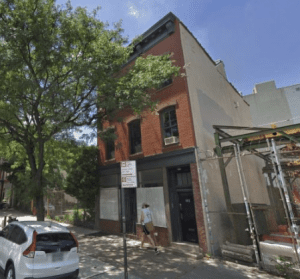 On January 27, 1990, ninety-three year old Alfred John Barret died in the cathedral city of Wells, Somerset, South West England. He was cremated and his ashes scattered. Since their move from London, he and his Scottish wife had resided in that city for some four decades, leading an unassuming life in a redbrick housing estate.

Alfred Perlès was born in 1897 in Vienna. His father was an affluent Czech Jew; his mother French and Catholic; his education was Austro-German in the noble tradition of Goethe, Hölderin, and Mozart. As a young man he dreamt of becoming a writer and, according to his memoirs, he had sold a film synopsis shortly before the outbreak of war. Apparently there were several novels (or fragments thereof) written in German, but these were never published. During  the First World War he served as a junior officer in the Austrian army. Having been sent into action in Romania, he was court-martialed for dereliction of duty and spent the remaining war years in an asylum. He subsequently left Vienna never to return.

Carrying a Czech passport and little money, he roamed the streets of various European capitals, before arriving in Paris around 1920. When his parents realized that their son had lied about studying medicine at the Sorbonne, they stopped sending money. Battling poverty in the margin of society, he survived by acquiring a ‘wolf nature’ (his own term) with an instinct for finding shelter. He was the wandering artist: exiled, rootless, and assuming different identities – one of an international community of drifters in Paris. He wrote in French and thought of himself standing in the tradition of Joseph Conrad, Ionesco, or Samuel Beckett who too had adopted a foreign tongue. It was a condition of modernism to him. Writing in another language intensifies one’s consciousness, opens new horizons, and deepens understanding.

Perlès met Henry Miller when the latter first visited Paris in April 1928, but it was not until early 1930 that they became friends. Born in 1891 into a family of German immigrants, Miller spent the first nine years of his life at 662 Driggs Avenue, Williamsburg, Brooklyn. A restless and rebellious young man who hated ‘old shithole, New York’ and rejected most of what his parents’ America stood for, he – like many other talented youngsters of his generation – left the country and moved to Paris.

At the time of his arrival, Alfred scraped together a living as a journalist, writing feature stories for the Chicago Tribune’s Paris edition. Miller was starving and homeless. Perlès offered help and they became roommates in Clichy, a poor district just outside Paris. As Miller recalled in Quiet Days in Clichy, Perlès was his mentor in the art of survival. Together they penned a pseudo-manifesto called The New Instinctivism: A Duet in Creative Violence (1930).

The Chicago Tribune office closed down in 1934, making Perlès unemployed. Soon after, an unexpected opportunity came his way. Situated about twenty miles east of Paris, the American Country Club of France had been co-founded by elderly New York businessman Elmer Prather for the golfing pleasure of expats and their British friends. Acting as Chair of the Board of Directors, Prather launched a monthly magazine containing club notices, sporting news, and adverts for golf clubs, waterproof clothing, etc. Lacking editorial expertise, he handed over ownership to Perlès on condition that the magazine’s connection to the Country Club be maintained by printing two pages of golfing news in each issue. 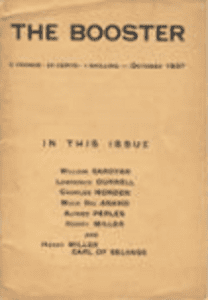 With Henry Miller and other friends, Perlès turned The Booster into an avant-garde enterprise (in English and French). In a letter inviting new subscriptions, Miller announced that the editors were planning to ‘boost, baste and lambast when and wherever possible. Mostly we shall boost. We like to boost, and of course to begin with we are going to boost ourselves’. The magazine’s starting team was impressive. Its general editor was Alfred Perlès; society editor: Anaïs Nin; sports editor: Charles Nordon (Lawrence Durrell); butter news editor: Walter Lowenfels; fashion editor: Earl of Selvage (Henry Miller); literary editors: Lawrence Durrell and William Saroyan.

Since the magazine depended on patronage from the golfing elite, a measured approach would have been a pragmatic position to take. The opposite was the case. The editorial stance was unbending and subversive. Financial backing soon dried up. It completely stopped with the publication of “Nukarpiartekak,”
a Greenland saga that had been brought to the world’s attention in 1884 by Danish explorer Gustav Holm. It tells the story of an old bachelor, a lustful Eskimo, who disappears entirely in the vagina of a young woman. Left of him is a skeleton that she passes onto the snow the morning after. Publication of the folk tale was denounced as obscene by the Club’s president. The magazine changed its name to Delta. It ran for another three issues before being discontinued. Boosting was no longer acceptable.

Perlès published his first novel Sentiments Limitrophes in 1936, followed two years later by Le quatour en ré majeur. Soon after, the band of friends broke up. Miller moved to Greece and Perlès fled to London. The Bohemian stage of Alfred’s life ended there and then. After coming to England in December 1938, he was briefly interned (he recorded his experiences in 1944 in Alien Corn). On his release he joined the Pioneer Corps helping to clean up rubble after the Blitz. He turned into a British patriot with an intense hatred of Nazi Germany. His moralistic outpourings were received with dismay by friends of old. 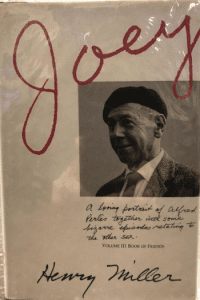 Suggesting that he had overcome the ‘futility’ of his wild years in Paris, he claimed to have emerged on a ‘higher plane of life’. In 1943 Perlès published his first English novel, entitled The Renegade. Around this time, he met Anne Barret who became his partner and later his wife. At the time of his naturalization in November 1947, he was living in London’s Kentish Town. By then he had changed his name to Alfred John Barret. In 1952 the couple moved to Wells. Perlès remained in contact with Miller. He visited him in 1954/5 in Big Sur, California, where he wrote My Friend Henry Miller. In 1979, Miller composed a tribute in the memoir Joey (the name given to Alfred by Miller and Nin).

The author’s virtual disappearance from public life is intriguing and goes beyond the suggestion of a more ‘mature’ outlook. The cause of Alfred’s reduced creative powers lies in his closeness to Miller. Perlès was a floater, an individual who was able to assume a variety of identities and act out different parts, without ever belonging to any specific cultural group. He drifted from Vienna, to Paris, to London, writing in German, French, and English, but unable to find a sense of personal completeness. His psychological makeup appeared as bewildering to himself as it was to others. Lacking the vigour to channel his creative talent, it was as if he was carrying the burden of tradition on his shoulders. For him, the journey had terminated. Literature was a dead end road.

Young Miller was of a different disposition. Working in Paris on his first novel Tropic of Cancer, he submitted himself to a program of obsessive toil. A disciplined daily routine was driven by one overriding principle: sustained creation may not possible, but work is always necessary. Unburdened by the past and wildly disrespectful of established traditions, literature for Miller was a highway of possibilities. In the end, his creative power inhibited his friend. As a writer Perlès was painfully aware of the fact that his rival’s achievements would overshadow his own. Miller’s presence became unbearable. He withdrew into the quiet splendor of England’s smallest city.

This clash of characters reflects a more general chasm. Young American artists arrived in Paris full of anticipation. Whereas European authors began to suffer from cultural depression, they adapted to their new surroundings with untamed enthusiasm and energy. Miller returned to America in 1939 at a time that Europe was about to disintegrate. Throughout his working life, and even after his cremation in June 1980, he elicited extreme responses from readers and critics. Whereas Alfred Perlès is a forgotten figure (even his autobiographical Scenes of a Floating Life is out of print), to this day Miller sparks animated discussion about his place in literary history.

Photos, from above: Henry Miller’s house at 662 Driggs Avenue (Google Maps); Miller’s tribute to Joey (Alfred Perlès), 1979; and cover of The Booster.