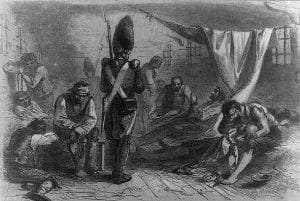 A few days later, on February 2, he was dead.

Sears was born in White Plains, and according to a memorial written after his death, he enlisted in the Continental Army in 1776 “under Captain James Milliken in Colonel Paulding’s regiment.” He had not yet reached his 20th birthday.

Sears fought at the Battle of Long Island, and at White Plains, and was part of the taking of Fort Montgomery. He was seriously wounded during that encounter, however, and was taken prisoner by the British.

“A ball penetrated his right leg and a bayonet his right side,” it is written in his memorial. “while his shoes were filled with blood, he was prostrated by a blow from the butt of a gun and trampled underfoot.”

As a prisoner of war, Sears spent time in a hospital recuperating from his wounds, and was then relegated to the infamous British prison ship Jersey, where, in the words of James Eldridge Quinlan, writing in his History of Sullivan County (1873), “with other patriots he endured what must forever disgrace British arms.”

Thousands of American soldiers spent time on the prison ship HMS Jersey, and about a dozen of them died every day, most from disease, although some from torture, or from being shot while trying to escape. Many more were said to have been driven mad by what they were forced to endure. The horrid conditions aboard the ship justified the nickname American soldiers gave it: “Hell.”

“Here he saw American patriots, rendered insane by the tortures of hunger, thirst and cold, scrape the verdigris from the foul copper kettles which were used to cook their food, with which they cut short their anguish,” Quinlan writes. “His sufferings, however, did not extinguish his ardor for liberty. No sooner was he liberated, then he hastened to peril his life again in battle.”

In all, Sears spent the better part of 13 months as a prisoner of war, including a short stint in a sugar house on Pearl Street. According to his memorial, “while in prison he suffered everything but death from cold and hunger. His feet were so badly frozen that the ends of his toes dropped off, and he was unable to walk for three months after he was exchanged.”

Following his release, Sears enlisted again, and served on the northern frontier for the duration of the war. Here he earned a commission as a Lieutenant, and distinguished himself as a man of “bravery, fidelity, and intelligence.” Unfortunately, the record of his commission was somehow destroyed through the negligence of his superiors, and that is what ultimately led to his death.

For a time after the war ended, the pension which he had been awarded was not important. Sears married Mary Haight from Crum Pond and the couple first settled in Montgomery (Orange County), but in 1790 moved to the town of Mamakating, where Sears became a popular and successful citizen. In 1802, he was elected to the New York State Assembly from Ulster County, and Quinlan notes that he was the “first resident within the present territory of Sullivan who enjoyed that honor, if we may except Cornelius C. Schoonmaker.”

Sears was returned to the Assembly in 1803, 1806, 1812 and 1813, the final two times representing Sullivan County, which had been formed from the southwestern corner of Ulster County in 1809.

He was appointed Sullivan County Sheriff in 1819, at a time when holders of that office were not only appointed, but prevented by state law from succeeding themselves, and served until February of 1821, when he was succeeded by Mahar Horton, who was the last appointed Sheriff of the County. (Horton was elected Sheriff when the law changed in November of 1822, so he was also the first elected Sheriff in Sullivan.)

Quinlan writes that Sears “also filled other important public stations,” including being named one of the commissioners of the Ulster and Orange Branch Turnpike Company in 1808, and serving as the supervisor of the town of Mamakating, both while it was part of Ulster County in 1800 and after it became part of Sullivan County in 1814. Shortly after Sullivan County was formed in 1809, Governor Daniel D. Tompkins appointed Sears, along with Samuel Frisbie Jones, one of the initial County Judges, serving under first Judge William A. Thompson.

In fact, Elnathan Sears became so well-known and respected that the community in which he resided, present day Burlingham, was for a time named Searsville in his honor.

“By economy and industry he accumulated a fortune, from which he dispensed to the poor with a liberal hand; and not until he was reduced by misfortune to actual want, did he deign to apply to the government of his country for the pittance to which he was entitled,” Quinlan writes. “For the last two or three years of his life, he endeavored to secure a final adjustment of his claims, and it is no less melancholy than true, that the tardiness of Congress was the indirect cause of his death. Returning from Washington in January, 1840, the cold and fatigue he endured, as well as the effects of hope deferred, terminated in a fatal illness.”

Elnathan Sears was 83. He is buried in the Chester A. Stanton Memorial Cemetery in Wurtsboro, in the town of Mamakating in Sullivan County.

Illustration the interior of the British prison ship, the HMS Jersey as depicted in an 1855 sketch.