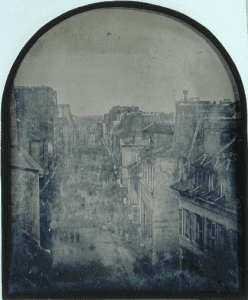 Fixated on photography, modern life revolves around the urge to capture and record every fleeting moment on our iPhones. It all started with the invention of the daguerreotype.

Using a camera obscura, a tool traditionally employed by painters (Canaletto made use of the instrument to create his views of Venice), Nicéphore Niépce produced in about 1826 the first known photograph, a view from his window at Le Gras in eastern France. His heliograph (‘sun print’) required eight hours of light exposure to bring up a faint image. 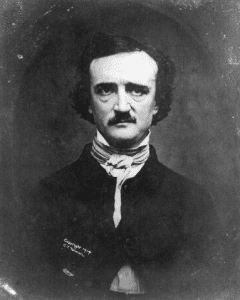 In 1829, the inventor formed a partnership with Louis Daguerre to improve the process. The next landmark was Daguerre’s 1838 image of the Boulevard du Temple in Paris. The photograph shows the length of the street, but moving traffic does not show up because of the duration of exposure time (over ten minutes). At its lower left, the image shows a person having his boots polished. Nameless, he is the first photographed human being. A year later, the daguerreotype reached the city of New York. The earliest photograph, a view of St Paul’s Church and (part of) Astor House in Lower Manhattan, was exhibited by Englishman D.W. Seager. The picture caused excitement. In December 1839 the first exhibition of daguerreotypes took place at 57 Broadway in Manhattan.

In the 1848 street battles, Parisian photographers risked their lives to record revolutionary events. There is a daguerreotype image (taken by an amateur named Thibault) that has survived. It shows the deserted barricades at Rue Saint-Maur-Popincourt after General Louis de Lamoricière’s bloody attack on Monday June 26th. It was the first picture to illustrate a newspaper story. Press photography was born. The American Civil War saw official war photographers cover operations and battles.

The camera revolutionized culture and communication. For the first time, images of ‘real’ life were recorded, sent around the world, and kept for posterity. The dead could be remembered, the fleeting fixed. Published portraits of Royals and notables made the public feel as if meeting them ‘in the flesh’. As portraiture was made affordable to increasing numbers of people, it became the rage of the age. Daguerre offered posterity at a budget price. At times, the quality of the image was outstanding. Edgar Allan Poe’s portrait haunts the viewer to this day.

The democracy of images did not ‘kill’ portrait painting just as digital publishing did not end printing. Art was revived and deepened. Expressionist painters produced some of the most stunning portraits in the history of the genre.

From Margin to Mainstream

For considerable time photography was not part of art education (not until 1929 did Bauhaus integrate photography as a subject of study). That created opportunities. An emerging creative endeavor that combined skill with technology, it was not hindered by academic regulations or shackled by prejudices that limited the field of participants. Photography was open to newcomers. The camera offered a career to marginalized individuals – to women, immigrants, and Jews.

Jewish women were among the pioneers of photography. Initially, it was a case of partnerships. Female photographers were either married to male practitioners or had close relationships with their families. Women in northern Europe were the first to enter into business, opening studios in Austria and Germany from the 1840s. Bertha Beckman was the first Jewish professional in the field. In 1843, she and her husband established a studio in Leipzig. On the death of her partner in 1848, she operated the workshop on her own. Thereafter she opened a chain of stores, including one in Vienna and another in New York. Photography pushed emancipation forward.

The daguerreotype made a significant socio-commercial impact in America. Photographic representation became part of the nation’s cultural identity. Immigrants played a crucial role in the process. Alfred Stieglitz was born in 1864 in Hoboken, New Jersey, into a family of German Jewish descent. His father was a wool merchant. Having sold his business in 1881, the family temporarily returned to Germany for the sake of their children’s education. Alfred entered Berlin’s Technische Hochschule where he studied the chemical processes to develop photographs. Camera at hand, he traveled throughout Europe shooting images of landscapes and people. His parents returned to America in 1884 but Stieglitz stayed behind, developing his ideas on the aesthetic potential of photography. He returned to New York in 1890. 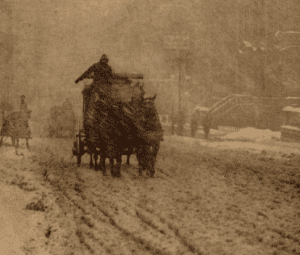 In 1893, he became co-editor of The American Amateur Photographer. On a trip to London, he met the founders of the Linked Ring Brotherhood, a photographic society created in May 1892 to promote photography as a fine art. Shortly after, he was unanimously elected as American representative of the brotherhood. In May 1896, he was named Vice-President of the newly formed Camera Club of New York and acted as editor of its Camera Notes. He used the journal to press his case for photography as an autonomous art form and published work by lens-men who shared his outlook. Camera Notes was considered the world’s most sumptuous photographic magazine.

Stieglitz was not a man to stand criticism. When in 1902 members of the Camera Club resisted his editorial policies, he mustered a band of followers and created a new grouping named Photo-Secession. Between 1903 and 1917 he edited the association’s quarterly magazine Camera Work. Painter and photographer Edward John [Éduard-Jean] Steichen – an immigrant from Luxembourg, later Director of the Photography Department at New York’s Museum of Modern Art – provided studio space for the group’s exhibitions. Named ‘Little Galleries of the Photo-Secession’, it was better known as 291 for its address on Fifth Avenue. Stieglitz organised various shows of photography and contemporary art, introducing Rodin, Picasso, Constantin Brancusi, and many others to a New York audience.

At the time, it was any photographer’s dream to draw Stieglitz’s attention. Professional prestige was having a photograph published in Camera Work. That happened in 1903 to one of the more eccentric figures that ever trod the modish streets of London or New York. 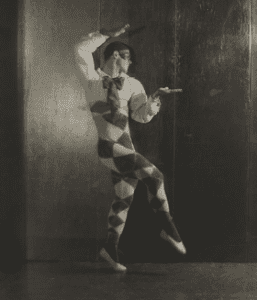 Photographer Adolph de Meyer was born Adolph Meyer on September 1, 1868 in Paris, the son of a German Jewish father; his mother was Scottish. He was educated in Dresden. In 1893, he joined the Royal Photographic Society and moved to London soon after. He used a variety of names, deciding in 1897 on Baron Adolph von Meyer – although the title was a dodgy invention. That same year he met divorcee Donna Olga Caracciolo. Her father was a Neapolitan nobleman; her mother the daughter of a French diplomat; but rumor had it that she was the illegitimate daughter of Edward VII. She grew up in Villa Olga in Dieppe, paid for by the king. Adolph and Olga married in July 1899 at Holy Trinity Church, Sloane Street, Chelsea, England. It was a marriage of convenience as the groom was homosexual and the bride lesbian or bisexual. The couple made their home in fashionable Cadogan Gardens, Chelsea.

Between 1903 and 1907, De Meyer’s work was published by Stieglitz. His name was made, his reputation growing. He moved to New York City in 1913 being employed as the first official fashion photographer for Vogue. He also worked for Vanity Fair. His work created a sensation, setting standards of style and elegance that had never been seen before. A master of sophistication, celebrities were queuing to have their picture taken; he was the chosen photographer of Nijinsky; and De Meyer listed George V and Queen Mary as his clients. Cecil Beaton dubbed him the ‘Debussy of photography’. In 1922 he traveled back to Europe having accepted an offer to become chief photographer for Harper’s Bazaar in Paris.

After the death of his wife in 1931 (she suffered from an addiction to drugs), he entered into a sexual relationship with seventeen-year-old Ernst Frohlich. He hired the young man as his chauffeur and later adopted him as his son. Political unrest in Europe made Adolph decide to return to America in 1938, taking Ernest with him. By then his style of work had gone out of fashion. He died in January 1946 in Los Angeles, forgotten and virtually unknown. Relatively few of his prints survive as most were destroyed during the war.

Photos, from above: The barricade in Rue de Saint-Maur-Popincourt after the attack by French troops; Daguerreotype of Edgar Allan Poe, 1848; Alfred Stieglitz: Winter – Fifth Avenue (1893); and Adolph de Meyer: Nijinsky as Harlequin in Carnaval (1910).