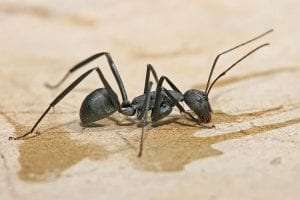 Prior to the start of black fly season in the Adirondacks, and continuing for several weeks after the swarms of those tiny, biting demons have faded, there is another insect onslaught.

Shortly after the soil has thawed in spring, ants begin to invade the living space of humans, especially kitchens and dining areas where bits of food are readily available.

Since there are so many types and species of ants in New York State, it’s impossible to say what kind of ant is appearing around countertops, near pantry closets, in garbage containers, and under tables where morsels of edibles lie undisturbed on the floor. Numerous ants welcome themselves indoors, as long as there is something worthwhile for them to collect and transport back to their colony.

The presence of sandy soils in much of New York State allow ants an opportunity to flourish, as these ground dwelling insects strongly prefer to embed their colonies in deposits of tiny, granular, rock fragments. Additionally, an abundance of standing timber allows numerous species of carpenter ants to establish their colonies in trees, especially those with areas of soft, moist wood. This combination of environmental factors helps support a wide variety of ants despite sometimes harsh winter conditions.

As winter approaches, soil ants move deeper underground in an attempt to get near or below the frost line. During the height of summer an individual colony may contain thousands of individuals, but by the time that the cold weather becomes established in late autumn, this number is substantially reduced.

It has been discovered by ant researchers that a queen ant may live for several decades while a regular worker may be fortunate to survive two consecutive winters. Males become totally absent during this period, as do the eggs, larvae and pupa that are abundant during the months when food is plentiful.

In a similar way, carpenter ants relocate into the center of a large tree in autumn to become better insulated against the cold. By huddling together in a large mass, the female members of the colony are often able to generate enough warmth through metabolic activity to prevent freezing to death. With the return of warm weather in spring, the members of the colony begin to venture from their winter retreats and explore the surrounding areas for certain types of food.

As the members of the colony awaken, sugary carbohydrates are needed to nourish the many adult workers. Deep cuts that have occurred in the bark of maple trees provide a welcome source of sweet sap that drips onto the ground during the sugaring season. During years when snow still covers the ground as the sap begins to flow, enough sweet residue forms around the base of the trunk to be useful when the ants become active as the warmth thaws the soil.

Once a single scout ant finds a source of food, it returns to the colony and leaves behind a scent trail that other workers are able to follow. As more ants visit that particular site and return to the colony with sugars, or other desired food items in their gut, a well developed path to that food source becomes established. The ants continue to visit that location until the material there is exhausted, a new and better source of food is found elsewhere, or the need for that type of nutrient diminishes.

While ants are known to eat almost any type of food, these insects have distinct needs during different times of the season. Once the queen begins to lay eggs, there is a high need for protein in the diets of the queen and the developing larvae, and later in the fall fats are believed to become a main component in their diet.

The presence of a variety of food sources in people’s homes often lures ants to come indoors to forage. And once one or two individuals are successful in obtaining sweets in spring, their scent trail leads many other foraging individuals to follow in their footsteps. Once a reliable source of nourishment is found, ants have the ability to significantly reroute their path should their primary, or secondary corridors of travel become blocked or obliterated.

It is not easy to eradicate these small, dark colored insects once they learn where your kitchen is located. It has been said that spraying the entire outside of your home’s foundation with a powerful insecticide will discourage them for a month or two, however, once this toxic layer is washed away by frequent rains, the older ants in the colony will remember the location and return again.

Placing scattered sources of food for them outside for several months is another method used to keep ants distracted from the food that is in your home.

In any event, by the end of summer ants typically seem to disappear until next spring.