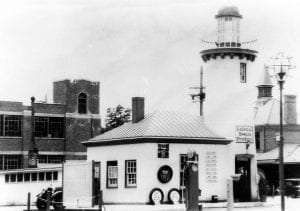 The Beacon Oil Company was formed in 1919 in Boston, and named for the city’s Beacon Hill.

This design emphasized the colonial past with its use of the State House-like dome, columns, balustrade and a “lantern.” Up to 50 examples were built around Boston and the “Watertown” logo was used on maps and promotional materials.

By 1929, Beacon Oil owned or leased 350 gas stations throughout New York State and New England (excepting Vermont). In that year, Standard Oil of New Jersey (Esso = “S O” for Standard Oil) took control, and renamed the company Colonial Beacon. In the 1950s, the names on the stations were changed to Esso.

According to John Margolies’s Pump and Circumstance: Glory Days of the Gas Station (Bulfinch, 1996), the Colonial Beacon company used this design throughout New York State, beginning in the in the 1930s. (Gulf used a lighthouse motif for a single facility in Miami.)

The photos at the top were taken in Saratoga Springs about 1930, on the corner of Woodlawn Avenue (to the left) and Church Street.  Soon after this photo was taken a service annex was added to the left. 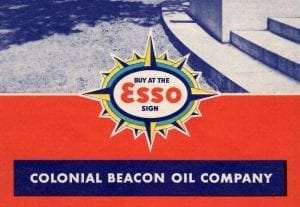 In the background is Saratoga’s railroad depot, the old county office building (still there but with different occupants), and the Commercial Diner (I believe this end of the block had earlier (c. 1900) been the site of the Commercial Hotel.

Photos below: A Beacon Oil Company Gas Station in Woburn, MA built in the 1920s, and later company promotional material.