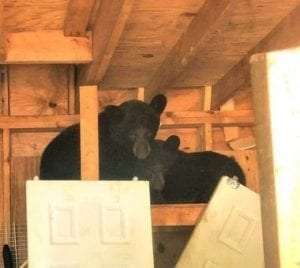 Upon arrival, the ECOs said they found two yearling black bears stuck inside a shed.

The bears had knocked over a number of items inside the shed and were trapped inside. With assistance from two New York State Troopers, the ECOs were able to open the shed doors just wide enough for the bears to escape back into the nearby forest.