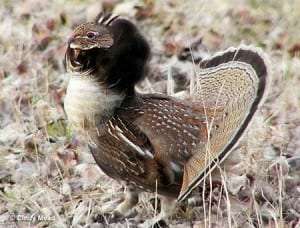 It is traditional backwoods wisdom to avoid getting between a mother and her babies, and while this advice usually pertains to the black bear, it could also apply to several other forms of wildlife.

In late spring many infants are emerging from the safety of their den or nest and most mothers try to provide some form of protection from potential danger to their babies. Perhaps the most remarkable display of parental courage for a creature of its size is seen in the hen ruffed grouse. This bird will aggressively confront and challenge any human that happens to come too close to its recently hatched chicks.

In April, the ruffed grouse typically constructs a nest in a slight depression on the forest floor near a sizeable tree trunk, stump or fallen log that prevents it from easily being seen from several angles. Additionally, the hen selects a site in which there is a high concentration of saplings, or an assortment of other ground clutter that discourages animals from wandering through that particular patch of forest.

The hen takes two weeks to lay her clutch of 8 to 10 eggs before she begins the three-and-a-half to four week process of incubating them. Because incubation does not start until the clutch is complete, all of the eggs hatch around the same time on the same day. As soon as the hatchlings’ plumage has dried, the birds instinctively leave the nest and begin to peck at the ground for food. At this early stage of development, invertebrates that live on and just under the leafy matter carpeting the soil composes over 90% of their diet. Such a protein enriched diet allows the chicks to develop the body tissues needed for their rapid growth.

While a glut of small bugs often exists on the forest floor at this time of year, weather conditions can impact the availability to the chicks. During a prolonged dry spell, many invertebrates that live on the ground temporarily migrate into the upper layer of soil to prevent dehydration. Even though the chicks are able to scratch down through a layer or two of dead leaves, they do not dig down far enough to uncover the bounty of bugs seeking refuge from parched conditions on the surface. Likewise, an excessively rainy period can saturate the soil enough to displace many of the bugs that reside there. During those occasions when food is scarce, the hen relocates her brood to places where foraging conditions are better.

Along with an abundance of bugs, adequate cover is another factor that the hen considers when selecting a foraging site for her brood. Because the chicks lack the ability to fly for most of their first month of life, they are easy targets for all of our woodland predators. Places of dense cover are particularly favored in June and early July, as sites covered with thick vegetation offer protection not only from ground attacks, but also from aerial assaults. The goshawk, along with several other birds of prey, is known to kill young grouse whenever they are seen moving about the brush below.

Should a fox, coyote, weasel or other ground carnivore detect a collection of foraging chicks, the hen will quickly fly in front of the stalking intruder and land a short distance away feigning a wing injury. This tactic can distract a predator long enough for the chicks to run deeper into the patch of cover in an attempt to escape from the sight of their attacker.

A human that happens to come too close to a grouse family will be immediately confronted by a very angry hen. With head held high, its crest fully raised, her plumage puffed out, and her wings held outward and slightly downward to create the impression of a much larger and fierce looking creature, the hen will repeatedly make ugly-sounding hissing noises and appear as if she is ready to launch an attack.

As the chicks instinctively recede into the brush, and more from the immediate scene, mom eventually retreats into the brush, going in a different direction in an attempt to confuse any individual that may attempt to follow her. She will take a very circuitous route back to her babies and continue to search for bugs.

Encountering a flock of very young grouse at this time of year can be very exciting, especially if the hen decides that you are getting too close to her babies. If conditions become overly dry, there is the possibility of greater movements of grouse families, which could lead to a most unforgettable wildlife encounter.