“I am hundred percent American Negro with a trigger Irish temper” – as she summarized her genealogy. The “Queen Victoria” in her birth name is both puzzling and amusing, but whatever the explanation she lived her life as a royal – Queen of Montmartre.

Around 1900, after the premature death of her father, the Smith family moved to Chicago.  There, Ada got her first taste of theatre, sensing the attraction of the city’s vaudeville houses. Carrying booze at a young age in Chicago saloons, which at the time outnumbered grocery and butchery shops taken together (more than 8,000 bars in the early 1900s), provided access to back rooms with sawdust-covered floors, where she observed performers and offbeat clients. It was the epoch of ragtime and Scott Joplin’s music. This was the scenery she adored. By the age of sixteen she joined the cabaret circuit of Greek-American producer Alexander Pantages as a singer and dancer. She would soon make her way up.

Entrepreneur Barron D. Wilkins had moved in 1903 from the Tenderloin to Harlem having taken over ownership of the Astoria Café at Seventh Avenue and 134th Street. Barron’s Café on the ground floor with its cabaret in the basement thrived until the dawn of Prohibition. Closing the café, he transformed the property into the Executive Club, among Harlem’s first nightspots catering to mostly white big spenders and gamblers.

Wilkins attracted a number of talented (and attractive) performers, including chorus girl Lucille LuSueur (later Joan Crawford) and cabaret star Florence Mills. Jazz was provided by Valaida Snow. Nicknamed Little Louis, he was labelled the world’s second best jazz trumpet player by Louis Armstrong. Once Wilkins was made aware of a young rising star in the business, he engaged Ada Smith as a headliner in his club. He presented her to his clientele as Bricktop. While other entertainers might have complained, Ada embraced the name and cultivated it during her long career.

In September 1923, she encouraged Barron to book Elmer Snowden’s Washingtonians. One of the members of the band was Duke Ellington. From a young age, Ada had a fine ear for musical talent. While engaged with a twelve-piece band at Connie’s Inn (owned by Latvian immigrant Conrad Immerman and his brothers), she was tempted to travel to Paris.

This happened at a time that Harlem’s talent was becoming restless, demanding to be recognised for fusing the artistic explosion that lit up the district north of Central Park. A cultural awakening was imminent. A period of voluntary exile (especially after the passing of the 1926 Cabaret Act which aimed at containing club life in Harlem) accelerated the process of liberation for many black artists and performers.

In 1924, Ada moved from Harlem to Montmartre (Paris, France). When first entering Le Grand Duc at 52 Rue Pigalle, she was visibly upset by the size of the establishment. It seemed barely big enough to fit a dozen people. A young dishwasher at the club informed her that most Montmartre venues were small and compact. His name was Langston Hughes – traveller and poet from Joplin, Missouri.

Bricktop arrived in Paris before Josephine Baker set the city alight with her Revue nègre. The cult of African-American entertainment had not started yet, but there were plenty of singers and musicians who had made their way to Paris. According to Langston Hughes, all culinary staff and entertainers at Le Grand Duc were “American Negroes.” Although he complained about the hardship of making a living in the city, he suffered fewer racist obstacles. 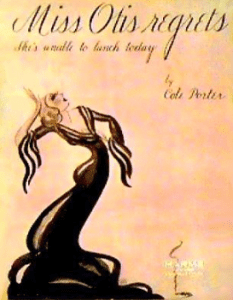 News of Ada’s performances soon started to circulate, attracting new clients to the club, many of them expats. F. Scott Fitzgerald was among the first to experience the delight of her performance. In his Tales of the Jazz Age (1922), he associated the genre with a post-war animation zest for life. The age was hooked on swing.

Ada’s close friend Cole Porter would write “Miss Otis Regrets” in her honor. It became her signature song. Porter invited her to teach his many contacts in Paris how to dance the Charleston. They included the Duke and Duchess of Windsor, the Aga Khan, and the actress Elsie de Wolfe who would later design the Colony Club on Park Avenue in New York. Fred and Adele Astaire practiced some of their Broadway routines on the club’s dance floor. Virtuoso violinist Jascha Heifetz would drop in and add to the joy. Music was a celebration.

Having opened her own nightclub Chez Bricktop at 66 Rue Pigalle, Ada enjoyed unrivaled success. Star performer at the club was Mabel Mercer, the diva of British cabaret. Born in Burton-on-Trent, her father – an African-American jazz musician – had died before her birth; her mother was a variety actress. Performing may have been in Mabel’s DNA, but cigar-smoking Ada Smith remained the focus of attention. With her signature feather boa draped over one shoulder, and dressed by London-born designer Edward Molyneux at his salon at 14 Rue Royale, she was Montmartre’s most prominent presence in the twenties and thirties. She was the doyenne of café society.

End of an Era

Clubland Paris celebrated a final musical highlight in the spring of 1937 when the Quintette du Hot Club de France settled in for a series of gigs at Chez Bricktop, backing Ada herself and Mabel Mercer, as well as playing their own repertoire of gypsy jazz. The Quintette had been formed in 1934 by Romani guitarist Django [Jean] Reinhardt and violinist Stéphane Grapelli. They were joined by either resident or visiting American musicians. Django and Grapelli dedicated the melody “Bricktop” to their host (recorded in Paris in June 1937, and again in Rome in 1949). 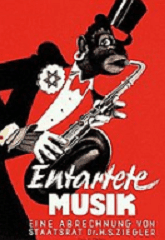 During the later 1930s, totalitarian politicians demanded jazz and gypsy swing to be cleansed from Europe. To Nazi ears, these were musical expressions of a lesser race. A legal ban across German national radio was imposed in October 1935. The notorious label “Entartete Musik” (degenerate music) was invented in 1938. The bid of Italian Fascists to eradicate jazz was less successful. The music remained popular. Mussolini’s son Romano was a fan and would become a prominent jazz pianist himself. Louis Armstrong’s 1935 tour of Italy was a great success. The Soviet drive against jazz took off in the 1940s when the “anti-cosmopolitanism” campaigns were set in motion.