Typically mentioned in the context of her fling with novelist Patricia Highsmith, little else is known about her. Even photographic images appear to be missing. A one-time Ziegfeld dancer, she married a British publisher, studied medicine in Cambridge, lived in one of London’s iconic modernist houses, and committed suicide. A biographer’s challenge. Surely.

In 1927, Dennis David Myer Cohen founded the Cresset Press in London. The publishing house specialised in lavishly illustrated limited editions of classics like The Pilgrim’s Progress or Paradise Lost, before going on to produce well-designed literary editions as the demand for expensive books waned. The Cresset Library series was set up in 1935/6 and revived after the war.

In 1949, an agreement with New York’s Chanticleer Press saw Cresset’s titles sold in the U.S. Shortly after, Cohen was made aware of Texas-born Patricia Highsmith’s talent before she was signed up by Heinemann and would go on to publish her early novels Strangers on a Train (1950), The Talented Mr Ripley (1955), and The Blunderer (1956). Cresset Press’s last title was published in 1961. 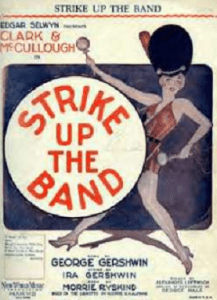 On a visit from London to New York, Cohen (most likely) attended a performance of Gershwin’s Strike Up the Band. After financial failure in Philadelphia in 1927, a revamped version of the musical opened at New York’s Times Square Theatre on January 14, 1930. It had a run of 191 performances. Ziegfeld dancer Kathryn Hamill was a member of the cast. The couple met and clicked. Their wedding took place in London in 1931.

Cohen was actively involved in the support of Jewish refugees and advanced the work of designer Serge Chermayeff. Born Sergius Ivanovich Issakovitch into a wealthy family at Grozny, Chechnya, in 1900, he was privately educated in Britain. He was at Harrow in 1918, by which time the family had been ruined by the Russian Revolution. He spent four years working as a journalist, and later as a professional ballroom dancer in Buenos Aires. On returning to London in 1924, he changed his name by deed poll and began a career in design. 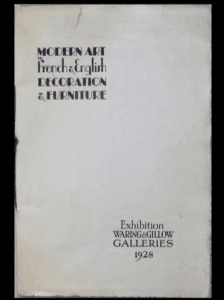 Employed at the modern art department of London’s leading furniture manufacturers Waring & Gillow, Serge organized (together with Paul Follot, director of the firm’s branch in Paris), the acclaimed 1928 exhibition Modern Art in French and English Furniture and Decoration which occupied more then an entire floor of the premises with sixty display rooms. In 1932 he founded Plan Ltd., a firm that produced modernist furniture from premises at 173 Oxford Street. Cohen acted as a director to promote the undertaking.

In 1933 Chermayeff went into partnership with architect Erich Mendelsohn, a Jewish refugee from Prussia. They erected De La Warr Pavilion at Bexhill, Sussex, the first large public building of the modern movement in Britain. Based on Mendelsohn’s original concept, Chermayeff contributed the interior design.

When Cohen and Kathryn envisaged the construction of a spectacular avant-garde home in 1934, they turned to Chermayeff & Mendelsohn to design the house. The result was a white villa at 64 Old Church Street, opposite the Chelsea Arts Club, known as the “Cohen House” after its first owner (after Cohen’s death in the early sixties, the property was acquired by Berlin-born publisher Paul Hamlyn [born: Paul Hamburger]). The contemporary style of Cohen House was a revelation to a city that up to that moment was largely ignorant of the revolution that modernist architecture would bring.

Once settled, Kathryn worked for a period as a secretary to Labour politician Aneurin [Nye] Bevan, now known as the ‘father’ of the British National Health Service (NHS). He may have inspired her decision to take up the study of medicine and genetics. In 1941, she enrolled at Newnham College, Cambridge. She graduated in 1948 and began work at London’s St George’s Hospital. Practicing as a psychiatrist, she stressed the need for the study and treatment of psychosomatic disorders.

Kathryn was also a co-director of her husband’s press. At a party organized by Time magazine journalist Rosalind Constable in New York in March 1948, she met Patricia Highsmith (her story “The Heroine” in Harper’s Bazaar had won the O. Henry Award for a first story in 1946).  Soon after, Patricia sailed (third class) on the Queen Mary to Southampton to join her hosts at Cohen House. From there she traveled to Rome. In a mood of depression, she asked Kathryn to meet her in Naples. The latter arrived at the beginning of September, after which the two women drove to Positano, the coastal Amalfi hill village that would inspire the writing of The Talented Mr Ripley. Sometime during the twenty days of their travels they became lovers.

When Patricia left Genoa for New York, the two never renewed their relationship. For the novelist, it was the start of a nomadic lifestyle, moving between England, France, Switzerland, and Italy. Her life became a lesbian grand tour of Europe, but none of her many relationships lasted long. An intensely private person, she was sometimes described by those who knew her as mean-spirited, cruel, and misanthropic. She left a trail of pain and distress behind her. Kathryn Hamill committed suicide by taking an overdose of barbiturates at her Chelsea home over the 1960 New Year weekend.

The productive partnership between Chermayeff & Mendelsohn was dissolved by the end of 1936. The former’s bankruptcy in 1939 forced him to seek a new career in the United States. In 1943 he was appointed Head of the Design Department at Brooklyn College where he created a course based on Bauhaus principles.

In 1947 Chermayeff became President of the Institute of Design in Chicago, in succession to Hungarian-born refugee painter and photographer László Moholy-Nagy who had opened the school as the New Bauhaus. The need to affiliate with a larger and more established body led in 1951 to a merger with the Illinois Institute of Technology, where the ethos was less liberal. Chermayeff resigned soon after. Having taught at Harvard’s design school, he moved to Yale in 1962. His first class there included two young British students – Richard Rogers and Norman Foster. Inspired by the master’s explication of contemporary architecture, they would dramatically change the face of London.