From its military beginnings as a colonial militia in 1755, Governors Island became a major headquarters for the U.S. Army and Coast Guard, making it one of the longest continually operated military installations in the country until its closure in 1996.

Initially, Governors Island was valued more for its environmental attributes than its strategic position. The island’s natural resources and location within the diverse ecosystem of New York Harbor became a foundation upon which four nations were attracted, many hoping to fulfill their dreams of economic security.

The Lenape and Dutch Nations took advantage of the harbor and its trade opportunities as well as the island’s plant and animal life. The British valued the area’s strategic potential, and by 1674, secured the region for themselves. Recognizing the island’s pastoral qualities, it was set aside for “’the benefit and accommodation of his Majestie’s Governors’” and from then on would be known as Governors Island.

By 1776, tensions between England and her American colonies peaked. General Washington and his colonial army made an unsuccessful attempt to secure New York against a siege by the British during the largest battle of the Revolution and one of the first – the Battle of Long Island (also known as the Battle of Brooklyn). Although the British captured and occupied the city of New York for the duration of the war, the memory of these events steeled the resolve of the young nation to protect its borders against foreign occupation.

The end of the Revolution marked the beginning of a new nation, and a new banner under which Governors Island would serve. With international politics threatening domestic security and overseas trade, the United States developed a defensive strategy to protect its coastal borders and its most prolific ports. Despite initial fears of a large central government and standing army, federal funds were provided to build fortifications around important harbors.

Known as the federal system of coastal defense, these systems of forts were staffed by quick responding local militia. The coastal initiative marked one of the first decisions made by the young government to unite behind a plan to protect the interests of her new nation. In New York, federal funds were supplemented by state contributions and later, by the city’s residents who volunteered to help construct the new forts. Fort Jay and Castle Williams on Governors Island were two of the largest coastal fortifications in the Harbor. In 1794, Fort Jay was erected atop the remains of the earthworks used during the Revolution, and was refurbished in 1808. 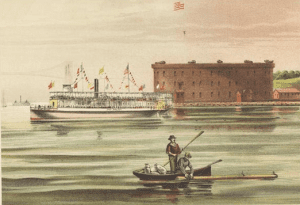 By 1811, Colonel Jonathan Williams designed a prototypical circular fortification which became known as Castle Williams. Williams, the first American born military engineer, planned the elaborate system of forts that were strategically placed throughout the harbor. With the outbreak of the War of 1812, these installations, along with others in the harbor, proved to be powerful deterrents to the British Navy who blockaded the harbor instead of entering it. New York’s coastal defenses underscored the importance that a unified system of fortifications could ensure the safety and livelihood of a community and ultimately, a nation.

Although the island’s fortifications became defensively obsolete by the 1830s, Governors Island remained in military service, while other harbor island installations were converted to non-military uses. The island became an administrative and training center for a peacetime U.S. Army and it served as a mustering point for personnel during the Mexican War and Civil War. It also served as a federal arsenal, and an army music school. It was during the Civil War that Castle Williams’ use changed from a coastal fortification to a prison first for Confederate prisoners of war, and later as a military stockade for the U.S. Army.

By 1878, Governors Island evolved from a small military outpost to the army headquarters for the Military Division of the Atlantic and Department of the East, responsible for coordinating army activities for the eastern United States. Once Governors Island became a headquarters, officers were able to bring their families to live on the island. The National Historic Landmark District is dotted with community structures which include a movie theater, YMCA, Officer’s Club, public school and three religious chapels, a quiet neighborhood not far from the hustle and bustle of New York City life.

As New York City gained international importance, so did the prestige of a posting on Governors Island. For senior officers, it was recognition of accomplishment and a test of leadership that often led to more senior commands and responsibilities at the highest levels of the army. Additionally, soldiers stationed here enjoyed social, political and commercial connections in the city rivaled by few other army posts. Newspapers of the day heralded the arrival of a new headquarters commander and the society pages would report on sporting and aviation events and occasionally announce the wedding of a captain or a major to a bride well known to New York society. The army headquarters became nationally recognized as it played a greater role in international affairs through two World Wars.

By the Second World War, the island was the headquarters of the U.S. First Army. Originally established in Europe in 1919, First Army initiated early planning efforts for the D-Day invasion in 1944 and led the American landing in Normandy, which resulted in the liberation of Europe.

In November 1964, the army announced that it would close its remaining New York posts and left Governors Island on June 30, 1966. Known as Changeover Day, this date marked the end of one military presence and the beginning of another. Governors Island “re-enlisted” with the U.S. Coast Guard becoming the largest Coast Guard base in the world and headquarters for its Atlantic Area command. 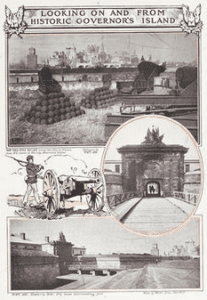 The Coast Guardsmen and their families enjoyed the same sense of community and military prestige as their predecessors, a blend of small town life at the heart of one of America’s largest cities. After 30 additional years of service, the Coast Guard announced that they too would leave Governors Island ending the island’s two-century military career. The closure was a quiet admission that island fortresses and urban military garrisons, although critical in the past, were no longer of primary importance in defending against the nation’s modern threats. As one of the last New York bastions of coastal defensive history drew to a close in 1996,

Governors Island has again been called to serve. The island has returned to a civilian use, and will be developed as a public venue for exploration and discovery. Today, trees and an array of old brick buildings soften the profile of Governors Island. Fort Jay and Castle Williams along with the military community that evolved around them provided the safety and security from 1794 to 1996 which allowed New York City to develop and evolve into this nation’s center of commerce and finance.