Ever wonder how one of the hundreds of lakes and ponds in the Adirondack Mountains got its name? Around Brown’s Tract, there are lakes named from nature such as Loon, Beaver, Trout, Gull, Bear, and Moose. There are also a dozen or more lakes named for noted guides or people who lived in or frequented the area during the Sporting Era (1860 to 1890), including Mosier, Francis, Hitchcock, Beach, Tuttle, Thayer, Smith, Salmon, and Wood.

An Adirondack historian who knew some of the nineteenth century Beaver River and Fulton Chain guides, Joseph F. Grady, reported in his 1933 history of the Fulton Chain and Big Moose region that Twitchell Lake “derives its name from Charles Twitchell, an amateur sportsman of Lewis County, who frequented its shores in the mid-century period [the mid-1800s].”

It turns out, that’s not true.

Initially, the earliest public mention of the Twitchell name I discovered was in an article about a young hunter named Briggs Wightman. Wightman stepped onto the ice one December and crashed through and drowned (Lewis County Banner). The title of that article is “Melancholy Occurrence” and it happened in 1856. 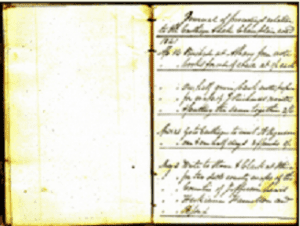 This summer however, while browsing through Watson Township materials at the Lewis County Historical Society research room, I stumbled upon three old diaries written by a Nelson Beach (1800-1876) titled “Journal of procedings relative to the Carthage & Lake Champlain road.” That night I read the following, written on June 3, 1841:

With Smiths large boat we go up Twitchel creek about 2 ½ miles find it very crooked leave the boat & go to the falls exploring the country E of it and about the falls return the W side of the creek and find a good route for a road at the foot of the Stillwater.

I was floored! The name of the outlet for our lake which winds its way through Big Moose into the Beaver River was already named in 1841, a full fifteen years before Briggs Wightman had his “Melancholy Occurrence.”

How exciting to be reading through Nelson Beach’s journal. He surveyed and built one of the first major roads through the Adirondacks since the road from Fish House to Russell opened three decades earlier.

Lewis County local historian Franklin Hough described Beach in 1860 as “a man of acknowledged ability, zealous and energetic in whatever he undertakes, and well informed upon all subjects relating to public affairs.” Hough added a genealogical footnote stating that Nelson’s father John Beach (1770-1845) had emigrated from Connecticut in 1814, and was a land agent in the township of Watson.

Nelson Beach’s Carthage to Lake Champlain Road (cut about 135 miles to Crown Point between 1844-1850) made it possible for scores of sports to access the incredible fishing and hunting previously experienced by only a few intrepid adventurers. The dream of farming in the wilderness put Old Forge and Number Four on the early Adirondack maps, as John Brown and his descendants established agricultural colonies but I was surprised to see Beach clinging to that same hope in 1841. He observed that the terrain near the current hamlet of Beaver River was “rough for farming except grazing” (June 10) and in the Newcomb area “lowland fit for Settlement” (June 16).

Nelson Beach also assisted leading citizen and early guide Thomas Puffer with construction of a toll bridge across the Black River to connect Lowville with Watson Township, the western “doorway” to the Adirondacks (Nov. 14, 1826, Black River Gazette). Then in 1831 Beach was appointed as Watson’s Postmaster, the esq. next to his name denoting his legal training, which in that day included land surveying (May 18, Black River Gazette).

According to W. Hudson Stephens, Historical Notes of the Settlement on No. 4, Brown’s Tract (1864), the earliest known account of a fishing trip of sports took a wagon-load of men from Lowville to the Beach place, and thence by twelve-mile hike to Beaver and Francis lakes. The year was 1818 and Thomas Puffer their guide. In just four years there was a promising farm colony called Number Four near the location where Puffer and party had camped, and a wagon road laid out for the new settlers. Orrin Fenton’s Homestead at Number Four emerged as a popular stop for guides and trappers headed east.

In April 14 , 1841, with snow still deep in the woods, Nelson Beach was planning his survey of the road to Champlain. He had print copies of the law mandating the route and several sets of county maps. He hired six hands (two sons of Thomas Puffer), a surveyor, and chain man. After banking $5,000 in Lowville, he and his party met a Carthage surveyor at Orrin Fenton’s House in Number Four in June. The diary includes a four-month travel adventure, laying out the road that first season and describing early settlements along the way. Twitchell creek is mentioned in the diary five times. Its mouth served as a wilderness base for Beach’s survey team, with Smith’s boat ready for their crossing and a shanty built for shelter and supplies.

If W.W. Ely’s Map of NY Wilderness (1879) (which was used in Erwin Wallace’s later editions of Descriptive Guide to the Adirondacks) can be trusted, the earliest trail to Twitchell Lake left Beach’s Carthage – Champlain Road about a mile past the creek crossing, slanting six miles southeast past Mud, Lily, and Wood’s Lakes to a midpoint on the Northshore of Twitchell Lake. This is the trail Briggs Wightman took in 1856. Of the ten fishing trips to Twitchell I have found in Lewis County news sources (1867-1882) most of them would have used this route.

But what about Charles Twitchell, the man local historian Joseph F. Grady had said Twitchell Lake was named after in 1933? He was born in Copenhagen, NY, in 1845, four years after Nelson Beach took his trip on Twitchell Creek.

So the mystery continues. Any or all of these earlier Twitchells could have supplemented their income by provisioning themselves or others, with Adirondack trout and venison.

Perhaps the connection is Thomas Puffer, or Number Four hunter and trapper Chauncey Smith, who seem to have “discovered” Twitchell Lake, and perhaps marked a trail there.

Editor’s Note: Readers who may possess or be aware of relevant Puffer, Smith, or Twitchell sources, should leave a note in the comments below. Those who would like a copy of the transcription of Nelson Beach’s journal can contact Noel Sherry at nsherry@bethel.edu.

Read part one of Noel Sherry’s story about the history of Twichell Lake here.