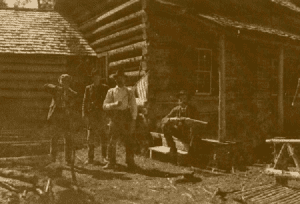 The Club Camp is often mentioned as the first permanent structure built on Big Moose Lake in the Adirondacks. The word permanent is rather ironic as this hunting and fishing establishment had a relatively short history of just 28 years. Today the camp’s origins, visitors, and sad end seem largely forgotten.

At the time, Big Moose, near Old Forge, was difficult to reach — the railroad would not arrive in the area until 1892. Before 1878, only lean-tos or shanties were available on Big Moose, notably that of businessman William “Billy” Dutton, which was built in 1876, and that of guide Jack Sheppard which was set up around the same time. 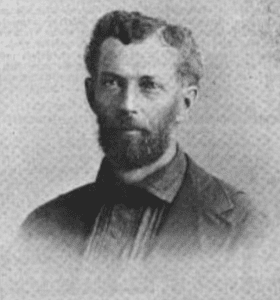 The Club Camp sportsmen asked Jack Sheppard to build a more substantial structure on the south shore of West Bay near the present camp known as Tojenka.

Jack, whose real name was Edwin Lee Sheppard (1836-1917) was a Civil War veteran and wilderness guide who had earlier built camps along the Fulton Chain.

An old photograph shows the building was constructed of horizontal logs with a front porch. Two smaller wings are visible with another, smaller building in the back.

According to Grady, Sheppard enlisted three other guides to assist in the construction: “Richard Crego, Bart Holliday [sic], and John Van Valkenburgh.” Richard C. Crego (1853-1925) was a guide from Boonville.

Bart “Holliday” is most likely Barton Haliday (b. ca. 1833) who was born in Lewis County, NY, and appeared on the 1865 NY State Census in Boonville. In 1872, he shows up as “Bart Halleday” on the register of the Forge House in Old Forge, guiding a party that included Congressman Clinton Hart Merriam (of Leyden, Lewis Co.). Barton Haliday was later listed among the guides at the Forge House in Stoddard’s 1881 The Adirondacks Illustrated.

John Val Valkenburgh was probably John H. Van Valkenburg who was guiding with Jack Sheppard at the Forge House in April, 1872. In the 1880s, Van Valkenburg built and ran a camp/hotel on Second Lake before leaving for Michigan where is reported to have died after suffering frostbite.

In his 1933 history, Joseph Grady named three of the wealthy sportsmen who initiated the building project: Charles Arnold, Martin Van Buren, and Travers [sic] Van Buren. These gentlemen had one thing in common that led to the naming of the camp. All were members of the Union Club which still exists on East 69th Street in Manhattan. A newspaper article in the Rome Daily Sentinel of September 5, 1892, refers to the camp on Big Moose as the “Union Club camp.”

In the late 19th century, fraternal clubs like the Union, were an important part of American society. Prominent businessmen and politicians were often members of several clubs and proudly listed their memberships in city directories. The clubs provided members of all classes access to various social activities. Club membership was often noted in members’ obituaries and pallbearers sometimes assembled at the club before a funeral to attend en masse. It is not surprising that many men who clubbed together, also fished together.

Returning to the three Union Club men mentioned by Grady, Charles Henry Arnold (1847-1902) was a wine merchant on South William Street in New York and a resident of Tuxedo Park, NY.

An article on the Club Camp in the Adirondack News on July 18, 1900 mentions several events and visitors, which were recorded on the walls and doors of the building. One inscription refers to Union Club member William P. Talboys (1837-1887), a New York banker and publisher. On September 26, 1880, Talboys was a hunting partner of Martin Van Buren II. Another gentlemen was identified only as “W. Remsen, Jr.” He was guided by Ed Arnold and “killed a black bear on Sept. 30, 1880 in West Bay.”

This was probably William Remsen, Jr. (1848-1886), who was a prominent member of the Union Club as was his father. The younger Remsen was noted for having invented a gin and lemon cocktail called the “Remsen Cooler,” said to have been popular at the Union Club in Manhattan. Perhaps a few or more were served at the Club Camp as well. The inscriptions also documented the weather: “Oct. 3, 1881—Temperature 66 degrees. Oct. 5, 1881 — Temperature 22 degrees. Gosh!”

During the 1880s, Big Moose Lake was the subject of several scientific studies, and the Club Camp became a convenient place to stay for the scientists and their guides.

In October and November of 1881, zoologist C. Hart Merriam (1855-1942, son of Congressman Clinton Merriam) visited the Club Camp with Frederick H. Hoadley (1848-1895) and ornithologist Albert K. Fisher (1856-1948). At camp Merriam described his troubles with “white-footed mice,” which made off with the cotton that they had brought for taxidermy work. The mice even invaded a supposedly mouse-proof cabinet.

In June 1882, Fred Mather (1833-1900), an expert on fish who was working on the Adirondack Survey for Verplanck Colvin, stayed at the Club Camp for a week with Jack Sheppard. “We stopped a while on Big Moose Lake, where Jack had a cabin well stocked with canned goods and other stores for the Big Moose Club of twelve members, when they wished to visit the lake.”

As the 1880s progressed, additional men were mentioned as members of the hunting and fishing club, but the direct connection to the Union Club in New York City faded. Some membership organization, however, must have remained because workmen continued to perform maintenance on the building.

On April 2, 1889, Richard Crego, one of the original builders, noted in his diary that he filled the ice house at the Club Camp. This was an annual chore to ready the place for the coming season. It is important to note that at this time the members of the Club Camp were essentially squatters with no rights to the land. It wasn’t till the late 1890s that railroad magnate William Seward Webb acquired title to most of the land surrounding Big Moose.

Among the members of the Club Camp during the later years were Clarence H. Kelsey (1856 -1930), Edward O. Stanley (1855-1933), a Dr. Currier, and a Dr. Fitch. Kelsey and Stanley were officers of the Title Guarantee & Trust Company in New York City and visited the camp in the 1890s. They later became owners of the Moore, or Fern Spring, camp on Big Moose.

Edwin Standish Woodbury (1849-1921), a shoe manufacturer from Boston, visited the camp in 1893 with his family and then built (1900) his own camp called Edilgra on Big Moose’s north shore. George Griffith (1853-1904) was Superintendent of Schools for Utica. In May 1899, Griffith was host to H. H. Cooper, Russell H. Wicks, and F. A. Bosworth, all of Utica, at the Club Camp. In July 1900, his sister, Miss Nellie M. Griffith of Lockport visited the superintendent at the camp where he was spending the summer.

Lastly, Thomas Pettibone Kingsford (1858-1932) of Oswego, NY, became the key figure in the Club’s final years. “T. P.” Kingsford, as he was known, was owner of the Oswego Starch Company and began visiting the Club Camp around 1900 or before. He liked the place so much that he began to bring his family, and in December 1902, he bought it. Kingsford added “a fine rustic boathouse” to the complex in May 1905.

In July 1906, Big Moose Lake made national news when Grace Brown was murdered on the South Bay. Two months later, the Club Camp made its own headlines, albeit much smaller. On September 4, 1906 between noon and 1 pm, the camp, then owned and occupied by the Kingsfords, caught fire (a defective stovepipe was said to be to blame).

A bucket brigade was formed, but they were only able to save some furniture. The loss of the building was valued at $1,500. An article in the Oswego Daily Times noted there were three ladies in camp when the fire broke out. Not surprisingly, the loss of the building did nothing to destroy the value of the wonderful location. T. P. Kingsford soon built another camp, Tojenka, near the original site.

Photos, from above: The Old Club Camp (courtesy Roger and Nancy Pratt), and Jack Sheppard from Forest and Stream, June 26, 1897.