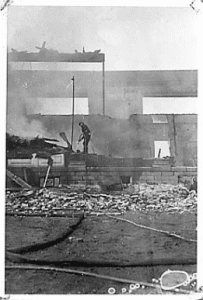 With all the growth that the Burnt Hills-Ballston Lake School District was experiencing in the first half of the twentieth century, the community was shocked when a fire of unknown origin consumed most of the oldest portion of their only school building and badly damaged the new section.

In these alternate educational sites, students from that time remember the cold walks to the outhouses in the winter and the single tin cup that was often used for all to drink from the wells.

The building was rebuilt in time for the class of 1931 to graduate from the newly-constructed building and, to this day, one can see in the basement of the current building, the structurally-sound though charred timbers from the fire, upon which the new building was built.

The building was supplemented in future years by many other buildings in the school district, all built to house the students as the area grew by huge numbers in the 1950s-1970s. That growth was fueled by the growth of General Electric in Schenectady and the desire of people to live in the suburbs, rather than in the city.

Rick Reynolds has been the Ballston Town Historian since 2004. Educated at SUNY Oneonta and SUNY Albany, he is a retired social studies teacher at Burnt Hills-Ballston Lake Middle School during which time he was named National American History Teacher of the Year in 2003. Rick is one of the authors of the book, From Wilderness to Community: The Burnt Hills-Ballston Lake Central School District.


This essay is presented by the Saratoga County History Roundtable and Brookside Museum. Visit their websites and follow them on Facebook at https://www.facebook.com/brooksidemuseum/