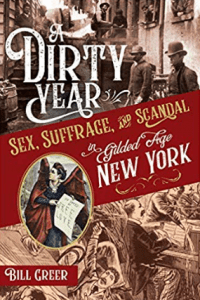 Bill Greer’s new book A Dirty Year: Sex, Suffrage, and Scandal in Gilded Age New York (Chicago Review Press, 2020) looks back to a time of rigged elections, everyday shootings, and attacks on the press, to sexual impropriety, reproductive rights, and the chasm between rich and poor.

As 1872 opened, the New York Times headlined four stories that seemed symptomatic of the decay in public morals that the editors so frequently decried: financier Jim Fisk was gunned down in a love triangle; suffragist and free-love advocate Victoria Woodhull was running for US President; anti-vice activist Anthony Comstock battled smut dealers; and abortionists were thriving.

Throughout the year these stories intertwined in unimaginable ways, pulling in others, both famous and infamous — suffragists Susan B. Anthony and Elizabeth Cady Stanton; Brooklyn preacher Henry Ward Beecher; Cornelius Vanderbilt; and William Howe, a preeminent criminal defense counsel.

Political parties split over a bitterly contested election; suffragist battled suffragist over bettering the place of women in society; and pious saints fought soulless sinners, until at year-end this jumble of conflicts exploded in what the author argues is the greatest sensation of the nineteenth century.

Bill Greer has spent decades exploring New York. His novel The Mevrouw Who Saved Manhattan portrays the city’s founding as New Amsterdam. He chaired the New Netherland Institute’s program to establish the New Netherland Research Center, has received the Institute’s Howard Hageman award, and has spoken on New York history throughout the Hudson Valley. Greer holds a PhD from the University of Pennsylvania. You can visit his website at BillsBrownstone.com.

Book Purchases made through this publisher’s link using the code NYHISTORY25 help support the New York Almanack‘s mission to report new publications about the history of New York. If you found this notice helpful, you can contribute directly at our Rally.org fundraising page. Books noticed at New York Almanack have been provided by their publishers.