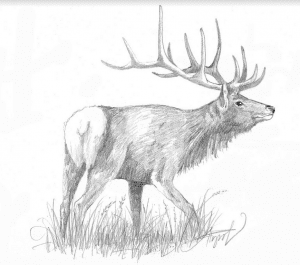 Hundreds of years ago, haunting bugle-like calls echoed through these hills and valleys. The sounds were made by bull elk to attract mates and fend off rivals.

Elk in the Northeast? Yes, elk were once the most widely distributed of North American hoofed mammals. Millions roamed over much of the U.S. and Canada. Adaptable to a variety of habitats, elk were found in the Adirondacks, and in most ecosystems except the tundra, deserts, and the Gulf Coast.

The specific range and number of elk that inhabited the Northeast are unknown, but fossil bones of elk have been found in shell heaps in Maine and at archaeological sites in Rhode Island. Elk antlers have been discovered in bogs in Vermont and a pond in New Hampshire. In The Mohican World, author Shirley Dunn relates a 1714 account of a Native American guide who was showing a group of settlers land near the Catskills. He pointed out a deep path worn in the streambank by herds of elk crossing a river.

Much larger than their whitetailed deer cousins, male elk weigh 600 to 1000 pounds, while females are about 25 percent smaller. The bulls sport massive, spreading antlers. The animals are tawny or cream-colored, except for a dark brown mane around the head and neck. Elk are also known as “wapiti,” a Shawnee word meaning “white rump.”

What happened to the eastern elk? According to historical accounts, when European settlers moved in, elk did not hide, but continued to roam where they always had, foraging near settlements, especially in winter. This made them an easy target, and reportedly settlers often killed more elk than needed: an “exterminating butchery” wrote zoologist J.A. Allen in 1871. In Lives of Game Animals (1929), Ernest Thompson Seton commented, “There are few stories of blood lust more disgusting than that detailing the slaughter of the great elk bands.”

The last elk in Massachusetts was killed in Worcester County in 1732. The few remaining in the Adirondacks, along the North Branch of the Saranac River, were dispatched in 1836. John James Audubon mentioned that by 1851, a handful of elk could still be found in Pennsylvania’s Allegheny Mountains, but they were gone from the rest of their former range east of the Mississippi. In 1880, the U.S. Fish and Wildlife Service declared the eastern subspecies of elk extinct.

As the great elk herds dwindled, Teddy Roosevelt and others were moved to save the species in the West. States enacted hunting regulations and banned market hunting of elk. Sanctuaries such as Yellowstone were established.

There were a few early attempts to bring elk back to the Northeast. In the 1890s, sixty wapiti from Minnesota were introduced into the Blue Mountain Game Reserve in southern New Hampshire, owned by Austin Corbin, a wealthy developer. Later, Corbin’s heirs gave some elk to the State of New Hampshire for release. After the animals damaged crops, a hunt was authorized, and today there are no elk in the state, except on game farms. In the early 1900s, elk from Yellowstone were released in Pennsylvania. Today the elk herd in the north-central part of the state numbers about 900, and the Elk Country Visitor Center is a popular attraction.

In recent years, southern and midwestern states have reintroduced elk. Today, Kentucky, Virginia, North Carolina, Tennessee, Michigan, Arkansas, and Wisconsin have free-ranging elk herds. Elk have spread into West Virginia, and the first wild elk in 275 years was sighted in South Carolina, likely an emigrant from the herd in Great Smoky Mountains National Park. Kentucky in particular has been a success story, and now has over 10,000 elk. The reintroduced elk are a western subspecies, smaller than the original eastern elk.

Could elk be restored to the Northeast? A 1998 study on the feasibility of restoring elk to New York by two SUNY professors found good habitat, but raised concerns about potential elk-human conflicts such as vehicle collisions and crop damage. New Hampshire state deer biologist Dan Bergeron said he would be concerned about competition with deer and moose. Walter Cottrell, once the wildlife veterinarian for Pennsylvania, strongly advised against the idea. He said Pennsylvania reintroduced elk before chronic wasting disease, a devastating neurological disease that afflicts members of the deer family, became established in parts of the West.

Arkansas brought the disease to their state via elk reintroduction (the disease cannot be tested for in live animals). Bringing elk to the Northeast would put our white-tail deer and moose at risk. We may never hear the bugling of wild elk in here again, but fortunately we can travel south or west to get a glimpse of, and perhaps hear, this magnificent animal.

Susan Shea is a naturalist, conservationist, and freelance writer who lives in Brookfield, Vermont. The illustration for this column was drawn by Adelaide Tyrol. The Outside Story is assigned and edited by Northern Woodlands magazine and sponsored by the Wellborn Ecology Fund of the New Hampshire Charitable Foundation.