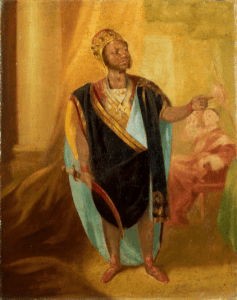 Sixteen days later, New York-born Ira Frederick Aldridge – known as the ‘Negro Tragedian’ – was asked to replace him as the Moor. His chequered career in England coincided with the final push towards the abolition of the slave trade there.

By the 1600s England had emerged as the dominant slave dealing nation in the Atlantic slave trade. As the Empire expanded, slaves were sent across the seas to work on plantations in the Caribbean or the Americas. Smaller numbers were ferried into the ports of London, Liverpool, or Bristol. To have an African servant became a status symbol. Samuel Pepys employed a ‘blackmore’ cook, Dr. Samuel Johnson engaged Jamaica-born manservant Francis Barber, and Royal Academy sculptor Joseph Nollekens’ female servant was nicknamed Miss Bronze.

The visibility of deprived black people in London is evidenced by William Hogarth’s 1738 engraving ‘Four Times a Day: Noon.’ Their number increased sharply when former slaves who had been recruited to fight on the British side in the American Revolutionary War (Black Loyalists) arrived in the London. Abandoned by the authorities, these soldiers were deprived of pensions, and forced into beggary. In a parallel process, the brutal nature of the slave trade gave rise to the abolitionist movement. Early white protests were uttered by members of the Society of Friends. In 1783, a number of Quakers established the London Committee to Abolish the Slave Trade, Britain’s first anti-slavery society. 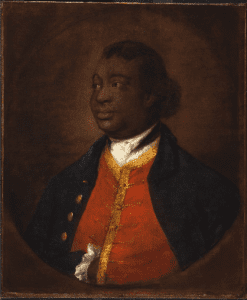 Ignatius Sancho was brought to London as a child slave in the 1730s, he was then freed and educated by the Duke of Montagu, for whom he later worked as a butler. He finally became the proprietor of a small shop in Westminster where he gathered around him a coterie of writers and artists. After his death in 1780, his letters were collected and published by his friend Frances Crew as The Letters of the Late Ignatius Sancho, an African. The two-volume collection was widely read and Sancho’s reflections on slavery and empire became topics of discussion.

The push for abolition found public support. William Cowper’s poem ‘The Negro’s Complaint’ (1788) struck a chord and was followed by another poem entitled ‘Pity for Poor Africans’. During the campaign Josiah Wedgwood was commissioned (1790) to create a seal that could be used to spread the message. It had a picture of a kneeling black man in chains with round the edge the words ‘Am I not a Man and a Brother’. The jasperware plaque was turned into a campaigner’s badge. 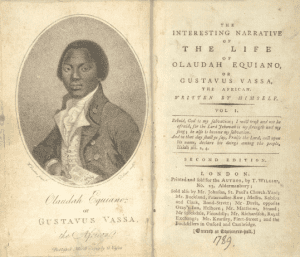 The ‘literary’ fight against slavery soon made an impression upon contemporaries. Olaudah Equiano was a former slave who, by the 1780s, lived as a free man in London where he joined the campaign against the trade. In March 1788 he sent personal letter ‘on behalf of my African brethren’ to Queen Charlotte.

In the following year he published The Interesting Narrative of the Life of Olaudah Equiano, his autobiography. The book tells of his kidnap in Nigeria, his being sold into slavery, his journey to the West Indies, his life as a slave, and the struggle to buy his freedom. Renamed Gustavus Vassa (the name he used throughout most of his life), he traveled to England in 1754, was converted to Christianity, and baptized at St Margaret’s Church, Westminster. Equiano’s autobiography was a commercial success. Between 1789 and 1794, nine editions were published and the book was translated into many languages.

In 1807 Parliament issued the Slave Trade Act, prohibiting the practice in the British Empire. The Act did not abolish slavery itself. In 1823, the Anti-Slavery Society was formed which eventually forced the passing of the Slavery Abolition Act a decade later. Seventeen-year-old Ira Aldridge arrived in Liverpool in May 1825 and traveled from there to London.

The son of a preacher, he had attended the African Free School, established by the New York Manumission Society for the children of free black people. He and fellow pupils were given a classical education focusing on grammar, writing, and mathematics. His early exposure to drama included seeing Shakespeare productions at the short-lived African Grove Theatre in Lower Manhattan, the first resident African-American theatre in the United States.

Ira’s mother died in 1818 and his father re-married. He ran away from home and found work backstage at the Chatham Theatre on the south side of Chatham Street (now Park Row) where, eventually, he made his acting debut. Unable to find regular employment, he decided to try his luck in London.

On October 10, 1825 Ira Aldridge performed at the Royal Coburg Theatre, the first black actor to do so, playing the role of Prince Oroonoko in The Revolt of Surinam, or A Slave’s Revenge (based on a novel by Anna Behn). The press was hostile. The Times of London claimed that the ‘shape of his lips’ made it impossible for the actor to speak proper English. Tolerance was hard to find.

On July 2, 1800 a pantomime was performed at London’s Little Theatre, Haymarket. Based on a true story, Obi, or Three-Finger’d Jack tells the tale of Jack Mansong who, in 1780, had turned a group of escaped Jamaican slaves into a notorious criminal gang. In the fight to escape slavery, he had lost two fingers. In December 1780, the Governor of Jamaica offered a substantial reward to the person who would bring in the highwayman, dead or alive. Captured and killed soon after, his head and severed hand were preserved in a bucket of rum, and presented to the authorities in Kingston in order to claim the reward.

The story-line of the pantomime was produced by actor John Fawcett for the Covent Garden Company’s summer season. The play was performed in mime, with signboards, songs, and choruses (the music was composed by Samuel Arnold). Its original cast was entirely white, performing the roles of slaves in blackface. The Obi pantomime dominated the London stage that season. It continued to play in and outside the capital for at least three decades. The silent role of Jack boosted the dramatic career of a young Charles Kemble who would become one of Britain’s legendary stage figures.

When the Napoleonic Wars finally ended in 1815, the English Abolition Movement regained its voice. Ira Aldridge’s early career intersected with the movement for ending slavery. At some point in the late 1820s William Henry Murray, manager of the Theatre Royal, Edinburgh, took it upon him to re-write the pantomime with Aldridge specifically in mind. For the first time, Jack was given a voice. Murray supplied Aldridge with stirring descriptions of atrocities perpetrated by slave traders and bitter denunciations of hypocritical Christian slave-owners who justified the trade. The melodramatic version of Obi showcased Ira’s talent at a critical stage of his career. It would remain part of his repertory well into the middle of the nineteenth century.

Ira Aldridge became the toast of provincial theatres. Billed as the ‘Negro Tragedian’ or the ‘African Roscius’ (after the former slave and Roman actor Quintus Roscius), he was a spokesperson for the oppressed as he battled racism both in his private life and in the stage roles that he made his own.

On occasion, he would address audiences directly, speaking of the cruelty and injustice of slavery, and imploring the government to intervene. By contrast, London’s theatrical world ignored his presence until March 25, 1833 when Edmund Kean died at Covent Garden while playing Othello.

Pierre-François Laporte, the theatre’s French manager, requested Aldridge fill the role for the rest of the play’s run. However, his performance was dismissed by London critics who objected to the actor’s race, youth, and inexperience. Aldridge played Othello only twice before the show was cancelled. Snobbish audiences at the Covent Garden and Drury Lane theatres did not value his talent. Except for a handful of appearances, he was effectively banned from the West End for most of his career.

In 1861/2 Aldridge bought a house at no. 5 Hamlet Road (where else?) in the prosperous London suburb of Upper Norwood, before becoming a naturalised British citizen in 1863. Shortly after, he went on a tour of Europe, delighting audiences with his performances of Othello, as well as Shylock, Macbeth, and King Lear – all in whiteface staging.

He played in Prussia, Austria, Hungary, Croatia, and Switzerland; he made a triumphant tour of the Netherlands; he was decorated in Germany; in Russia his acting techniques were admired (he was a frequent guest at Count Tolstoy’s estate) and copied by Shakespeare addicts.

He suddenly died in 1867 while on the road in Poland and was buried with State Honours in the city of Lodz, where today his grave is a shrine cared for by the Society of Polish Artists of Film and Theatre.

Ira Aldridge is one of thirty-three distinguished stage actors and the only one of African-American descent to be memorialised with a bronze plaque at the Shakespeare Memorial Theatre at Stratford-upon-Avon.