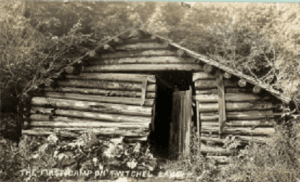 The Twitchell Lake History Committee is working on documenting the story of Twitchell Lake in Big Moose, NY, and how it was named, with an account of the individual camps, hotels, and highlights down through the years. Twitchell Lake is 5 to 6 miles south of the old Lake Champlain Road, now under the Stillwater Reservoir in Northern Herkimer County.

For over 12 years the Conable family have hosted a social event at their camp on Twitchell Lake with a poetry competition, the winner receiving honors as “Poet Laureate of Twitchell Lake.”

This year’s original composition was to be a “villanelle,” a 19-line poem with a pattern of repeating lines with a distinct rhyming pattern. I received honorable mention for “Twitchell’s Lake,” which came out of my research on the discovery and naming of the lake for the History Committee.

In the old Lewis County news articles about fishing and hunting trips on the Champlain Road from 1860-1890, “sports” referred to fishermen and hunters, “sheet” was a common term for a lake, and “speckled beauties” a favorite phrase used to describe brook trout.

Lanpher House was Lowville’s “Headquarters for the North Woods.” Fenton House was the early sportsman stop in Watson Township’s Number Four, and the Wardwell family the proprietors of a log shanty where sports could rent a boat and put up their horse and carriage where the Beaver River became the “Still-water,” 11 miles past No. 4. This was also near to where Twitchell Creek entered the Beaver River.

Charles Twitchell (1845-1922) of Copenhagen, Lewis County, is believed to be the namesake of the lake, cutting a clearing where the trail from the Champlain Road came into the north shore of “Twitchell’s Lake,” and where guide Hiram Burke is said to have built the first log cabin on this Lake (see Edwin Wallace’s Adirondack Guide, 13th Edition).

Since the first public reference to “Twitchell creek or lake” has been found in Nelson Beach’s Journal for surveying and building the Champlain Road (1841), the Copenhagen “Twitchell” would have been his father Erastus E. Twitchell (1811-1895) or an older uncle such as Urial A. Junior (1822-1902) or Jerome B. (1803-1888). It is likely that one or all of them supplemented their Copenhagen farm income with Adirondack venison and trout, but we are still trying to learn how a dairy farming family in Copenhagen memorialized its name on a lake some 45 miles away in the Adirondack Mountains.

My inspiration for this poem was a news article in the Lowville Journal & Republican (September 30, 1874) titled “North Woods Wonder,” in which the writer holds Verplanck Colvin’s early maps of the Adirondacks on his lap and describes the lakes in the panorama spread out before him:

“All the wilderness is strewn with lakes as if some great mirror had been shattered by an Almighty hand, and scattered through the forests for Nature.” The writer then goes on to name many of the lakes in the Brown’s Tract. A beautiful picture!

Anyone with information about Twitchell family history which pertains to naming the lake, is invited to email Noel Sherry at nsherry@bethel.edu.

Like broken-mirror gems these myriad Adirondack lakes,
On his lap a Copenhagen farmer had a map outspread,
As planned he for a two-week camp with sports that he would take.

In Lowville, Lanpher’s fits the party, horse and carriage rental make,
To hire a guide and pack the gear, and sportsman trip spearhead;
Like broken-mirror gems these myriad Adirondack lakes!
Up through Watson to Number Four, a road the wagon quakes,
Before us Fenton’s woodland wit and home-cooked meal is spread,
As planned he for a two-week camp with sports that he would take.

The Still-water of the Beaver River, ten miles give or take,
Horses tied, pack baskets filled, at Wardwell’s shanty shed;
Like broken-mirror gems these myriad Adirondack lakes!
At mile fifteen, a side-trail south to Woods and Twitchell’s Lake,
The farmer helping Hiram Burke had cleared the first homestead;
As planned he for a two-week camp with sports that he would take.

Through trees this lovely sheet appeared, Chas loved his own namesake,
Two tranquil weeks six comrades with a speckled beauty spread,
Like broken-mirror gems these myriad Adirondack lakes!
As planned he for a two-week camp with sports that he did make.

Picture of Hiram Burke’s log shanty, said to have been the first building on Twitchell Lake.