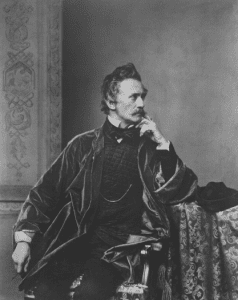 Between 1835 and 1852 he produced about 200 lithographic reproductions of masterworks, laying the foundations for the publishing House of Hanfstaengl.

A Bavarian in New York

In 1833, the Lithographische Anstalt Franz Hanfstaengl was established in Munich. Nicknamed Count Litho, Franz became the portraitist of Bavaria’s celebrities. In 1853 he added a photographic workshop to his studio which, from 1864, was located in the city’s elegant Maximilianstrasse. Acting as Bavarian Court photographer, he then became involved in fine art printing. In November 1868 his son Edgar (I) took over and expanded the business. Towards the end of the nineteenth century the company employed around a hundred workers. Hanfstaengl stood in the forefront of the democratisation of art and images. For the first time in history, walls of domestic quarters, studies, and even bathrooms, were decorated with reproductions of ‘Old Masters’. In 1893, Ludwig II of Bavaria granted the company the right to be named Königlich Bayerische Kunstanstalt. 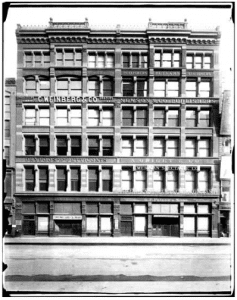 Edgar, a cosmopolitan individual, was married to Katharine Heine, daughter of Bostonian Wilhelm Heine. The latter, a refugee from the 1848 Revolution, was a cousin of General John Sedgwick of the Union Army and a coffin-bearer at Abraham Lincoln’s funeral. Aiming at an international market, Edgar opened branches abroad. He acquired the premises of photographic publishers George Kirchner & Co at 33 West 23rd Street, Manhattan. In February 1892, the opening of the Franz Hanfstaengl Fine Art Publishing House was celebrated with an exhibition of paintings by Munich artists.

The location was well chosen. In the years following the Civil War, the block of West 23rd Street between Fifth and Sixth Avenues was lined with the homes of affluent New Yorkers. By 1880 retail firms had taken over. That year, Wiesbaden-born architect Wilhelm [William] Schickel was commissioned to design a six-story brick building for commercial purposes. Among its early occupants were a number of publishers, including Henry Holt, E. P. Dutton, and G.P. Putnam’s Sons. The business soon flourished.

In 1907, Edgar (II) was put in charge of the firm’s management. A progressive and liberal mind, he was one of the co-founders of the German Democratic Party (DDP) in November 1918. His younger brother Ernst [‘Putzi’] Hanfstaengl was a different character altogether. As a youngster, the latter encountered many prominent visitors at his parent’s villa, including such celebrities as ‘Buffalo Bill’ Cody and Mark Twain. He then left Bavaria to study at Harvard University where he mingled with the likes of T.S. Eliot and Walter Lippmann. A talented pianist who combined performing great German composers with Harvard marching songs, he graduated in 1909.

After a year of conscription in the Royal Bavarian Foot Guards, followed by a brief period of frolicking in European cities, he moved to New York. He opened a gallery on Fifth Avenue, ran an art school in Greenwich Village, and managed the family publishing house until December 1917 when all ‘enemy’ assets were confiscated by the Alien Property Custodian. In February 1920, Ernst married Helene Elise Adelheid Niemeyer, a Long Island blonde. She was the daughter of German-speaking immigrants from Bremen. Their son Egon Ludwig was born in 1921. Shortly after they left for Germany. 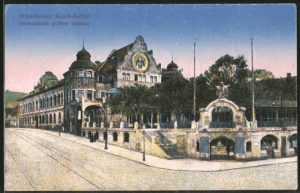 Putzi was living in Munich when, in November 1922, he joined the crowd on Rosenheimerstrasse and heard Hitler speak at the Kindl-Keller. Fascinated by Adolf’s fiery oratory, he became one of his most intimate followers. Hanfstaengl and Hitler remained close through the 1920s and early 1930s. He considered Hitler a diamond in the rough, lacking refinement and social skills. He took it upon himself to do the polishing. Introducing Hitler to Munich’s high society, he helped finance the publication of Mein Kampf and, dollar rich in inflation-hit Germany, bankrolled the NSDAP’s newspaper Völkischer Beobachter.

Being part of Hitler’s inner circle, Putzi would entertain the Führer with his jokes. He was the only performer able to do justice to the latter’s passion for Richard Wagner by hammering passages on piano from Tristan or Die Meistersinger. He also composed Nazi marching songs and claimed to have devised the chant ‘Sieg Heil’. Hitler was a frequent guest at Ernst and Helene’s apartment in Gentzstrasse, just north of Munich’s university (known to visitors as ‘Café Gentz’), and he was godfather to their son. After their divorce in 1936, Helene returned to New York. Egon Ludwig, who carried the burden of being the Führer’s godson, volunteered in 1941 for service in the US Army Air Corps. 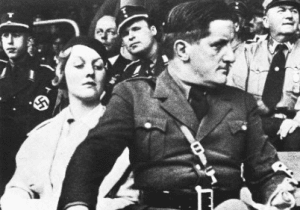 The 1929 Depression caused massive problems for most German publishers, but Putzi pushed through the idea that the firm included in its publishing catalogue a series of ‘Portraits of the national [Nazi] leaders’ that turned out to be very lucrative. With his wide range of contacts and being fluent in English, he was invited to head the Foreign Press Bureau in Berlin. A dispute with Joseph Goebbels, Minister of Propaganda, led to his removal from Hitler’s staff in 1933.

Fearing that his life might be in danger, he made his way via Switzerland to Britain, but his admiration for Hitler appeared undiminished. In 1934 he returned to Harvard for the 25th reunion of the class of 1909 and received a warm welcome. He was cheered by classmates when he gave the Nazi salute and received an invitation for tea at the house of Harvard’s President, James Bryant Conant.

With the outbreak of the Second World War, Hanfstaengl was interned by British authorities as an enemy alien and transported to a Canadian prison camp. The discomfort of the experience made him decide to pass on particulars about his former Nazi friends in exchange for better living conditions. In June 1942 he was moved to Washington to work as an intelligence analyst for President Roosevelt. He also gave evidence to Henry Murray who, at Harvard’s Psychological Clinic, produced a memorandum on behalf of the Office of Strategic Services (precursor to the CIA) which was titled Analysis of the Personality of Adolph Hitler (published in October 1943). In a pioneering study of politico-psychological profiling, Murray described Hitler as a paranoid ‘wreck’ and ‘full-fledged masochist,’ incapable of normal human relationships.

In September 1944, Hanfstaengl was handed back to the British and repatriated to Germany at the end of the war. In 1957, he published Unheard Witness (told into a dictation machine and turned into book form by Brian Connell) with a dual purpose. It was supposed to be a personal assessment of the madman he had served. It was also a bid to clear his name. He failed in both attempts. His psychological make-up of the Führer was almost identical to that of Murray’s report and did not add any details of lasting value or interest.

Putzi may have been an oddball, but he represented a reckless elite that turned politics into business, and business into politics. Its main concern was to suppress the left, crush the unions, and protect capitalism from communism. Hitler was cheered for his declaration that democracy and commerce were incompatible. Ironically the word privatization, our pre-virus religion, was introduced into English during the 1930s in the context of explaining economic policy in the Third Reich and borrowed directly from the German ‘Reprivatisierung’. The term was a Third Reich invention at a time that the Nazis transferred public ownership to the private sector. Initiated by the National Socialist Party, this was socialism in reverse.

After the Second World War, Edgar rebuilt the firm’s largely destroyed factory and continued publishing. He initiated a more contemporary catalogue with emphasis on paintings by Franz Marc and other Expressionists who had been defamed as degenerate by the previous regime. In relation to his younger brother, Edgar had the last laugh. The company remained in the family until 1980, when Kunstverlag (Peter) Blanc took over its copper-plate printing section. A link between Harvard and the German publishers is maintained to this day. The Fine Arts Library of the University holds a collection of 101 photographic and photomechanical prints produced by Franz Hanfstaengl.

Photos, from above: Founding father Franz Hanfstaengl (courtesy Stadtmuseum München, Fotosammlung); The Schickel designed building at West 23rd (courtesy collection of the Museum of the City of New York); Munich’s Kindl-Keller, Rosenheimerstrasse, where ‘Putzi’ first heard Hitler speak; and Putzi in 1934 with Diana Mitford who in 1936 married Oswald Mosley at the home of Joseph Goebbels, with Hitler as a guest of honor.