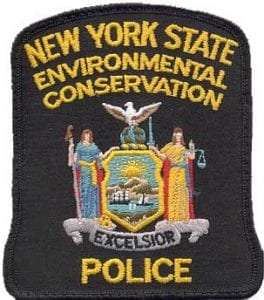 What follows is a report, prepared by DEC, of recent missions carried out by Environmental Conservation Police Officers in New York State.

Great Horned Owl Rescue and Release – Suffolk County: On March 18, ECO Chris DeRose received a call from a hiker who saw two baby owls at the base of a tree just off a walking trail in a wooded area of Smithtown. While responding, ECO DeRose reached out to ECO Connor Paschke, who had prior experience with birds of prey as a wildlife biologist. Upon arrival, the ECOs found two Great Horned Owl chicks, approximately two to three weeks old, sitting at the base of a tree. There was an undersized nest in the tree, likely because the adult owls were first-time parents. The ECOs examined the owl chicks and found them in relatively good health with no obvious injuries. The officers determined that mom and dad were still in the area and unhappy their chicks were being bothered after multiple hoots and close fly-bys. The ECOs decided to transport the owl chicks to a local wildlife rehabilitator due to the threat of predators and to rule out any injuries. On March 21, ECO DeRose was advised that the Great Horned Owl chicks had no injuries and were healthy enough to be released. ECO DeRose, with volunteers from Wildlife in Need of Rescue and Rehabilitation (WINORR), mounted an artificial nest and released the owls in a neighboring tree. The owl chicks have taken to the nest and are being cared for by their parents.

Injured Duck Rescued – Albany County: On March 25, ECO Kyle Bevis responded to a complaint about a mallard duck with an arrow sticking out of it at Washington Park Lake in Albany. ECO Bevis met with the complainant, a member of the Washington Park Conservancy, and attempted to catch the duck without success. ECO Bevis called off the rescue so that the duck did not become overly stressed. On March 26, ECO Bevis, ECO Kurt Swan, and DEC wildlife staff met at the park, located the duck, and used a net gun to capture it. They clipped the arrow and transferred the duck to a local veterinarian, who removed the arrow completely. The duck is recuperating. Mallards are federally and state protected and hunting of waterfowl is not allowed in Washington Park. Furthermore, the waterfowl hunting season is closed for the year. Officers believe the incident likely happened between Saturday, March 21, and Wednesday, March 25, and ECOs are asking anyone with information that could lead to the prosecution of the person or persons responsible for shooting the duck to call the 24-hour DEC Dispatch Center at 1-877-457-5680.

Rehabilitated Owl Released – St. Lawrence County: On March 30, ECO Bret Canary became aware of a project at the home of Jade Reynolds, art teacher and mother. Reynolds and her husband, a New York State Police Officer, are teaching their two children while they are out of school during “New York State on PAUSE” and ECO Canary heard that the family was incorporating owl pellets into their learning by dissecting them for science. Locally, a barred owl was ready for release after months of rehabilitation and the ECO thought it was the perfect opportunity to inform the family. ECO Canary met with the family at their farm and released the owl with the assistance of the two children. Reynolds posted the release live on social media so that her students at Indian River Central School in Philadelphia, Jefferson County, could view it remotely.

USNS Comfort Medical Ship Arrives – New York City: On March 30, ECOs assisted in the escort of the USNS Comfort into New York Harbor. The 1,000-bed hospital ship has 12 fully equipped operating rooms and will significantly increase New York’s hospital surge capacity during the State’s response to the COVID-19 public health crisis. The USNS Comfort will be docked at Pier 90 on Manhattan’s West Side and provide surgeries and other medical care to patients who are not infected with the coronavirus to free up intensive care unit beds at New York hospitals. More pictures are available on DEC’s Twitter page.

COVID-19 Response – Westchester County: DEC personnel from across agency divisions and regions statewide are supporting the State’s response to COVID-19. Personnel from more than 20 New York State agencies are working on response efforts to stop the spread of COVID-19. As the number of confirmed cases of COVID-19 continue to grow, ECOs have been responding to the pandemic at various testing centers throughout New York State. ECOs have been mobilized for a variety of roles such as Incident Command System (ICS) functions, technical services such as fit testing, and site security.

In 2019, the 288 ECOs across the state responded to 25,704 calls and worked on cases that resulted in 16,855 tickets or arrests for crimes ranging from deer poaching to solid waste dumping, illegal mining, the black market pet trade, and excessive emissions violations.

If you witness an environmental crime or believe a violation of environmental law occurred, call the DEC Division of Law Enforcement hotline at 1-844-DEC-ECOS (1-844-332-3267).