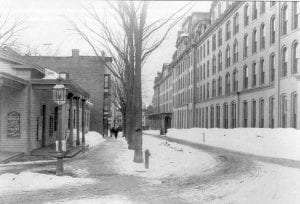 With the dawn of the 20th century came the race to build the tallest skyscrapers. Such wonders were made possible in part by the new technologies afforded by steel girders.

This was part of a trend which had its roots half a century earlier, in such behemoths as the record-breaking hotels of Saratoga Springs. The United States Hotel, seen in these photos, was the world’s largest structure when completed in 1871. This was surpassed only a few years later when the Grand Union was constructed next door. 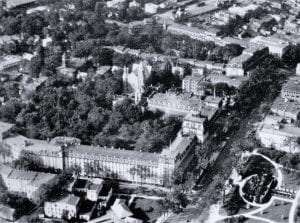 These mid-Victorian buildings employed more traditional building designs. There were two major constraints on the size of buildings which were lifted by developments at that time. One was Otis’s safety elevator.

Simple elevators followed on the invention of the pulley of millennia ago. The row house, the mainstay of 19th century urban living arrangements, typically contained a “dumb waiter.” This small manually-operated hoist brought prepared food from the basement kitchen up to the first floor dining room. But concern about the rope breaking limited such devices to goods, not people.

Enter machinist Elisha Graves Otis, who lived in Troy for about five years around 1830, before eventually moving to Yonkers. 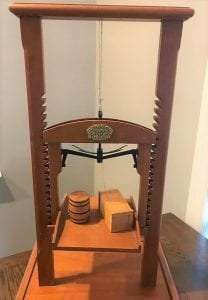 His safety brake, invented in 1852, forever changed things. Just like child-proof caps on medicine bottles – which requires one to squeeze the cap before it can be rotated – the normal cable tension from the weight of the cage kept the brake released. Should the cable break, a spring-loaded ratchet pushed out a “pawl” on each side to engage a strip of wall-mounted teeth. This brake became the basis of every elevator to follow. (See the model in the color photo. Otis demonstrated this in front of a crowd by purposely cutting the cable and showing the cage didn’t fall.) 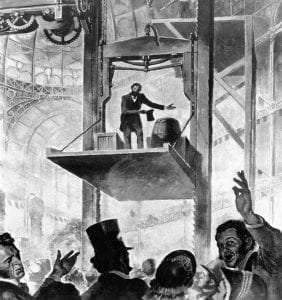 The Otis Company is still in business. Their elevators alone carry the equivalent of the world’s population every nine days, and so elevators are the most extensive mass transit system ever devised.

And also the safest. A plummeting elevator, a cliche of Hollywood disaster movies, has become a common phobia, but there appears to be only one known case where elevators crashed due to snapped cables. In 1945, a B25 bomber hit the Empire State Building, severing the cables on two elevators. Only one had anyone on board, a single woman – she survived.

Illustrations, from above: Looking down Division St. in Saratoga Springs ca. 1910, from the depot to Broadway; The Grand Union Hotel in Saratoga Springs is in the foreground on the left with the United States Hotel up the street (Broadway) and the depot at the top of the photo (c. 1930); a working model of the Otis safety elevator; and Otis demonstrating his elevator safety brake in front of a crowd.