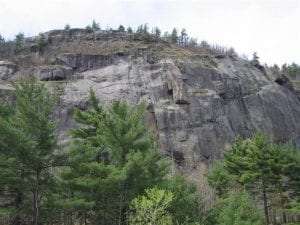 Bode issued tickets for Failure to Obey a DEC sign, returnable in the Town of Keeseville. The tickets were written to a 31-year-old man from Bernardsville, New Jersey, and a 32-year-old woman from New York City.

According to a press release sent by DEC, Forest Rangers last issued tickets to climbers for climbing on the closed routes in the early 2000s. More information about rock climbing closures can be found here.

Photo of view of Poke O Moonshine provided by DEC.