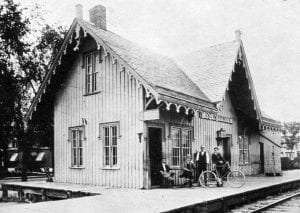 The Goths, Visagoths, and Vandals were the infamous three tribes that sacked Rome. More than a thousand years later, during the rebuilding of London after their great fire of 1666, Christopher Wren sought to introduce the latest styles from Italy. He termed that what had burned “Gothic,” a disparaging term, similar to “vandalism” from the name of the other tribe, as a way to promote his new designs.

The architecture that Wren disparaged was based on large cathedrals, mansions, government buildings and such during the Middle Ages, engineered with heavy stone.  In America, the colonists followed the architectural styles of Wren, which in turn was borrowed from Renaissance Italy, and itself based on neoclassical Greek and Roman styles of around 2100 B.C.E. 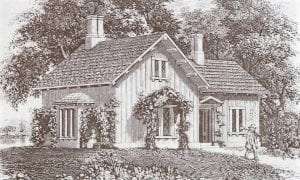 Most people call Wren’s styles Colonial. Historians call them Georgian, from first four British monarchs of the House of Hanover, who reigned in succession from 1717 to 1830: George I, George II, George III, and George IV.

But after the American Revolution, many residents of the new United States sought to distance themselves from anything English, and Georgian was tweaked and called Federal. In the 1820s a pure form of Greek design became the rage, Greek Revival, as Greece was considered the cradle of democracy.

But as Greek Revival wore on, there was concern that this was a pagan style. At the same time, new materials and building design afforded by the exploding Industrial Revolution created a demand for new styles, one being a revival of Gothic. One notable subset was Carpenter Gothic (because it translated medieval stonework into wood), a more practical and easily executed approach to the older stone style.

The Delaware &Hudson Railroad’s original depot at Cambridge, Washington County, NY, is a classic example of Gothic. Its steep roofs, its dog-eared window trim, and fret-sawed bargeboard all came from an attempt to emulate an English church. But its walls were made from a completely new and previously impractical form of wood, board-n-batten. 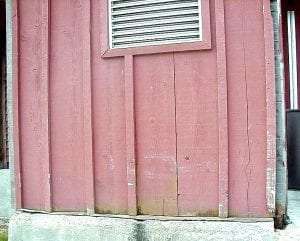 A batten is a thin flexible wooden strip used to flatten a sail or “batten down the hatches.” (Batten is a variation of “baton,” a thin stick. One would think that “bat” would also be related, but apparently it isn’t.)

The Industrial Revolution brought steam powered sawmills which could crank out endless board feet of finished lumber, including these thin strips. The boards could be laid up next to each other (see clapboard), and the opening covered by a batten. This type of siding was laid up vertically so rainwater would not collect on each projecting batten and seep into the wall.

In his 1851 book The Architecture of Country Houses, New Yorker Andrew Jackson Downing said of his wood cottage designs: “We greatly prefer the vertical to the horizontal boarding, not only because it is more durable, but because it has an expression of strength and truthfulness which the other has not.” 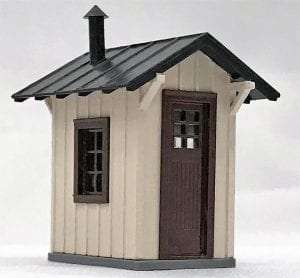 Board-n-batten siding thus starts appearing around the 1830s and 1840s, during what is now termed the Gothic Revival period. It’s verticality was acclaimed as helping to suggest the overall lines of Gothic. Since trees grow vertically, board-n-batten was seen by some as a more natural way to use wood.

Board-n-batten has a tendency to rot along the bottom. And the thin battens are subject more to weather than the thicker boards under them. As a result, over time, board-n-batten became more a utility material rather than a fashionable one.

Photos, from above: D&H’s original depot at Cambridge; Andrew Jackson Downing’s design for a small cottage, showing board-n-batten siding; example of board-n-batten as it weathers – rotting on the bottom; and the replica railroad building made for model railroaders by Tichy.