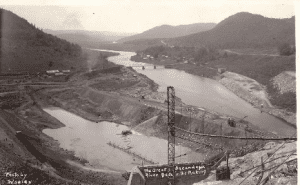 Ninety years ago the Sacandaga Valley changed forever. March 27, 1930 marked the completion of the Conklingville Dam and the closing of its three large Dow valves, which hold back the 37 billion cubic feet of Sacandaga River water we now know as the Great Sacandaga Lake.

While the day was marked with a small gathering, there was no elaborate ceremony. The pomp and circumstance of long speeches from honorary guests eventually occurred in September of that year, when the weather was much more pleasant.

The massive project to build the Sacandaga Reservoir actually began three years before. Despite local opposition, New York State created the Hudson River Regulating District, giving the new agency the authority to create reservoirs within the Upper Hudson River Watershed in order to impound water, considered important to regulate flooding downstream. In addition, water could be released in times of drought. The Sacandaga Reservoir Project created the largest reservoir in New York State.

Ten communities in the valley were either partially or completely flooded. All residents living below “the taking line” needed to move to higher ground. All of the buildings and structures had to be removed, ten new bridges built, miles of new highway constructed. Two additional dams besides Conklingville had to be completed. This massive undertaking cost 12 million dollars, 95% of which was paid for by private companies along the Hudson who would benefit from a guaranteed water supply. The other 5% was paid for by communities that would benefit from flood control.

The Great Sacandaga Lake – whose name was changed in the 1960s to increase tourism – holds the key to the local economy. Waterfront restaurants, shops, marinas and rental properties all benefit from the influx of tourists during the summer who are drawn here by the majestic beauty of the lake. However, at the time of the construction it was unclear how the valley would reinvent itself. When the Conklingville Dam was completed the country was in the throes of The Great Depression, the Second World War was not far off and America’s future was uncertain. The post-war economy of the 1950s brought the huge lakeside cottage boom around the Sacandaga, one that continued for decades and is still active today.

Lauren Roberts is the Saratoga County Historian. She received her dual Bachelor’s Degrees in Anthropology and American Studies from Skidmore College before going on to earn her Masters Degree in Public History from the University at Albany. Lauren worked locally in the field of Archaeology before entering her current position in 2009. Lauren can be reached at lroberts@saratogaountyny.gov.

This essay is presented by the Saratoga County History Roundtable and Brookside Museum. Visit their websites and follow them on Facebook at https://www.facebook.com/brooksidemuseum/