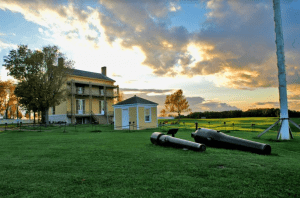 For a second time in US history, a 15th Infantry formed as the War of 1812 began. In the harsh winter of 1813, well-respected Brigadier General Zebulon Pike commanded this regiment on their perilous 180-mile march over-land from Plattsburgh at Lake Champlain to Sackets Harbor on Lake Ontario.

A year before the significant trek across Northern New York state, another individual associated with the 15th Infantry came onto the scene and would later gain world-wide fame. President Madison commissioned Surgeon William Beaumont in December 1812. With little to do in the army though, he set up a private practice in Plattsburgh, but soon returned to service in February 1813.

The grueling 1813 spring march to Sackets Harbor started with Beaumont among the marchers. The regiment arrived at its destination on March 27th. That month Beaumont wrote to friends in Vermont about his ardent war support, in contrast to his New England friends who opposed the war effort.

Beaumont reported from Sackets Harbor. “The regular force at this place is not so great as common report would have it. There are about 5,000 soldiers, sailors, and marines, exclusive of the Second Brigade, which arrived a few days since in the adjacent Towns of Brownville and Watertown, eight or ten miles distant … “

He continued: “The troops are all very healthy. I have but three or four sick in my regiment; have lost none on the march, nor since we arriv’d, tho’ our situation is miserable. We are camped where the mud and water have been over shoe in every direction, in open huts, without any straw, or more than our blankets to cover us. No new or strange disease has occurred since I saw you… Yesterday we shot a soldier of the marine corps for desertion; we could not obtain the privilege of dissecting him. Next Thursday another is to be shot.” With an apparent penchant for investigating man’s interior anatomy, Beaumont gained notoriety later in his army career researching the human digestion system with a live candidate.

By April 1813, an assault force including the 15th Infantry, along with Beaumont, sailed from Sackets Harbor across Lake Ontario to York, Upper Canada [today’s Toronto] and secured that settlement for the Americans. After returning to Sackets Harbor, General Chandler then selected troops from the 15th Infantry to sail for the Niagara region in early May. Sackets Harbor became vulnerable with the resulting 29 May 1813 attack by Crown Forces and their Allies. By 1815, as the war ended, so did the 15th, for a time.

Although the 15th Infantry played a major role in the War of 1812 at Sackets Harbor, it was not the last time a 15th was connected to the community. Reorganized for the Civil War, the army’s 15th Regiment eventually called Madison Barracks home in 1889. In 1900, they secured another place in history focusing on Asia. Involvement initiated by the Boxer Rebellion caused their time in China to span over 20 years, plus their military presence in the Philippines.

Around that time, in November 1901, Trenton NJ native 27- year old George R. Lee enlisted at Sackets Harbor’s army post Madison Barracks for a second three-year commitment in the 15th US Infantry. In the record, his occupation is listed as “soldier” of Co. H. By 1904, at the Presidio in California, he left service where his military discharge noted him as a “very good” Private.

From the War of 1812 to the early 20th century, one form of an army’s 15th made its mark on world events. Their connection to Sackets Harbor brought men to serve there and have an impact on the wider American story.