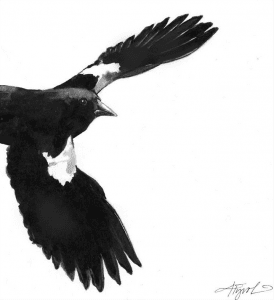 Around the middle of March, I begin to feel that springtime urge to hit the road, to lace up the winter-neglected running shoes and start slogging through some miles.

My early-season jogs take me past a wetland area that stubbornly spans both sides of a road near my home. It’s a usual – and very welcome – happening to spot red-winged blackbirds here, even while snow lingers around the cattails and brushy willows.

Red-winged blackbirds are among the earliest migrating birds to return in spring. The males seem natural show-offs, with their flashy red-and-yellow wing patches and loud, persistent song. Often, focused as I am at putting one foot in front of the other, I’ll hear the blackbird’s distinct konk-la-reee, with its extended ending trill, before I think to look for these early spring arrivals.

While the red-winged blackbird’s song is not the loveliest, it is certainly most welcome this time of year, as is the flash of color these birds imbue onto the still dull landscape.

“I think of redwings as the true harbingers of spring,” said Ken Yasukawa, professor emeritus of biology of Beloit College, who has studied red-winged blackbirds and their habits.

Yasukawa explained that the timing birds returning from their winter homes in the southern United States is mainly a matter of procreation. An early return helps male blackbirds compete for the best territories. Having the best territories means they’re more likely to attract the most females, who start to arrive about two weeks behind the males. Attracting the most females means a better chance of passing on those red-winged genes to the next generation.

Like with many bird species, male red-winged blackbirds are more colorful – and more vocal – than females. And they’re most vocal during early spring mornings, when they sing at a rate of 10 songs a minute. Yasukawa said that while male redwings sing less later in the day, and later in the season, they are rarely silent.

Although female redwings have the long, pointed bills and somewhat stocky stature of males, they don’t have red wings at all; they are mostly brown and heavily streaked. One common trait of both male and female red-winged blackbirds, however, is that both will mate with multiple partners.

“Males will attract multiple females to their territories and will fertilize at least some of their eggs,” Yasukawa said, noting that one study in Washington state showed 33 females nesting in a single male’s territory. Females, likewise, will often mate both with the male within whose territory they are nesting, as well as with those in neighboring territories.

“It’s not at all unusual for one brood to be sired by two or more males,” he said. “On my study area in Wisconsin, about one third of young were sired by males other than the territory owner.”

Where one bird’s territory ends and another’s begins is sometimes revealed by the display, or concealment, of the bright wing patches, also called epaulets.

Males use those flashy red wing patches both to defend their territories and to attract mates. Indeed, the bright color seems critical to both purposes. In studies when researchers have blackened the red feathers, those male birds are likely to lose ownership of their territories. Conversely, when the red coloring is enhanced, Yasukawa said, birds are more often challenged by their male neighbors.

“It seemed as though the brightened males represent a great threat to their neighbors, who evict them to prevent females from mating with them – something like a preemptive strike,” he said.

Red-winged blackbirds will cover their epaulets, leaving only the yellow border visible, when trespassing onto other territories – either foraging or seeking to acquire new territory. They’ll also hide the bright red feathers when they perceive a threat, like a Cooper’s hawk flying overhead.

Male redwings have already appeared in parts of southern and central New Hampshire and Vermont, and females are starting to show up, too. In my more northern neck of the woods, though, I’m still waiting. Soon, I know, they’ll call out from their roadside perches and puff out those epaulets to full display, claiming their place in a landscape gradually transitioning to spring.