Demands for freedom of the press were ignored and the paper was suppressed in 1726 – but once ink starts flowing, autonomous thinking cannot be reversed.

Printing House Square in the City of London acquired its name after the Great Fire when the King’s Printer settled there in order to publish the London Gazette, the government journal of record, and other official documents. In 1785, John Walter started publishing the Daily Universal Register at the square. The paper was renamed The Times in January 1788. 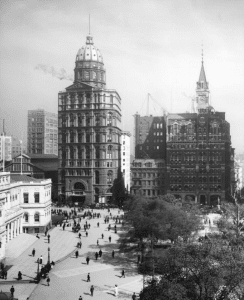 New York’s Park Row was a hub of newspaper publishing from the 1840s. The location, nicknamed Newspaper Row, was close to City Hall and the courts with easy access to the main post office. It was home to major dailies such as the domed New York World building (known as the Pulitzer Building after its owner), the New York Tribune, and the Sun. The headquarters of The New York Times stood on the other side of the Tribune.

Crowds would gather here to catch the latest news, mourn Lincoln’s death, or celebrate public events. Part of the southern section of the street was named Printing House Square. Here, on January 17, 1872, a statue was unveiled of the multi-talented Benjamin Franklin holding a copy of the Pennsylvania Gazette. It was created by Ernst Plassmann, a German sculptor who had settled in New York City in 1853.

After his death in April 1790 in Philadelphia, Franklin was acknowledged as one of the most influential figures in American history. He established a debating society which evolved into the American Philosophical Society; he co-founded the Academy of Philadelphia which would become the University of Pennsylvania.

He was also active in public affairs, serving as Deputy Postmaster-General of the colonies and as a member of the committee to draft the Declaration of Independence. He negotiated a crucial recognition treaty with France in 1776.

In spite of all that, Plassmann’s statue honors him as a printer. It was presented by Albert De Groot, a retired Hudson Valley steamboat captain, to the ‘Press and Printers of New York City.’ The statue is a bronze tribute to the power of print.

Born in 1692 in Cradley, Worcestershire, young William Caslon did his apprenticeship as an engraver and toolmaker with London-based Edward Cookes. The latter was a specialist in engraving ornaments on gun barrels. In 1716, Caslon settled in London’s Minories (a district favoured by gunsmiths), where he made a living engraving Government marks on the locks of guns. He also trained in the craft of punch-cutting, being aware that compared to their Continental counterparts, London type cutters were held in low regard at the time. Caslon was determined to challenge that situation.

In 1719, he was asked by a representation of London booksellers to cut a font of ‘Arabic’ type for a new bible to be printed for the Society for Promoting Christian Knowledge (SPCK), copies of which would be carried by missionaries aboard trading vessels heading for the Far East. A year later, Caslon set up a foundry in Chiswell Street, Islington.

Dissatisfied with traditional typefaces, he pioneered his own font designs. He used Dutch faces as model, but refined those by making them more imaginative. His cutting of the SPCK type was finally complete in 1724 when a payment was made for 355 punches, 366 matrices, and a mould. It was the start of a productive career for Caslon. He became England’s most prominent type-founder and ‘letter-founder to the King’. 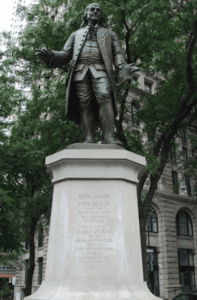 During that same year 1724, eighteen year old Benjamin Franklin visited London for the first time after running away from the ‘harsh’ apprenticeship to his brother James, printer of the New-England Courant in Boston. He then spent time with Samuel Keimer, a printer who had arrived from Southwark, where he had spent time in prison for debt. When Keimer left London, he transported an old printing press and a worn-out font of English letters to America and founded the Pennsylvania Gazette.

Franklin’s journey was a study trip. He would spend a year and a half in London, learning his trade at Samuel Palmer’s first, and then at John Watt’s printing houses. As there were no letter-founders in the American Colonies and all types had to be imported, he was keen to acquire the full skill range of type-founding. He must have been well aware of Caslon’s activities in the field as these were partly sponsored by Watts, his employer.

Upon his return, Franklin opened his own print shop in Philadelphia and acquired the Pennsylvania Gazette in 1729. At that point in time, Caslon was unknown to most American printers as he did not issue his first sheet until 1734. By then, Franklin had been appointed public printer for Pennsylvania. Three years later, he introduced Caslon’s types to the Gazette.

A parallel development took place in 1733 when Henry Newman of the SPCK sent a specimen of Caslon’s types to Edward Hutchison in Boston, describing Caslon as an ‘artist’ who had made it his mission to outdo his colleagues in Europe ‘so that our Printers send no more to Holland for the Elzevir and other Letters.’ The specimen was well received. Caslon’s type would conquer America.

The invention of Johann Gutenberg’s movable type was a printing revolution. It quickened the spread of literacy in Renaissance Europe and sparked the Reformation. Printing stood in the vanguard of political and socio-cultural developments.

The French Revolution triggered an unprecedented level of political discourse. Printing in Paris exploded. The printer was a potent force in the battle for social change and in the molding of public opinion. Seen from a different perspective, printers stood at the forefront of organizing the labor movement, creating trade unions, and pushing for improved industrial relations.

During the eighteenth-century, Caslon’s typeface was used by most American printers. In fact, it was so popular that well into the twentieth century the adage in print shops was “When in doubt, use Caslon.” He played a crucial role in revolutionary America. Old Caslon was the typeface used for Thomas Paine’s ground-breaking 1776 pamphlet Common Sense in which the author pleaded for American independence from Britain. It sold a staggering 50,000 copies to a population of roughly three million people. He refused royalties because it was liberty, not money that had motivated him. Paine’s rousing voice inspired Thomas Jefferson to write the Declaration of Independence.

The Declaration was formally ratified by the Continental Congress on July 4, 1776, although its content was kept secret. The text was delivered to the printing house of Irish-born John Dunlop, whose shop was just blocks from the State House (Independence Hall). He spent the night setting the declaration into lead type.

He printed 200 copies, now known as the Dunlop Broadsides, which were distributed around the thirteen colonies. One copy was handed to General Washington in New York who read the text aloud to his troops. Another traveled by ship to London and was presented to George III, King of Great Britain and Ireland, the “Royal brute” (according to Thomas Paine).

A second printing of the Declaration was commissioned by Congress in January 1777. This copy was printed by publisher and Baltimore postmistress Mary Katherine Goddard. The Goddard Broadsides contain the list of all signers. Both copies of the declaration used Caslon’s lettering. Independence from the Hanoverian monarchy was proclaimed with London type. Ironically, Goddard’s 1785 specimen book was dedicated to George III. Caslon and served both Royalty and Revolution – decolonisation in motion.

Illustrations, from above: Benjamin Franklin at work on a printing press Reproduction of a painting by Charles Mills; Pullitzer’s New York World building at Park Row (Newspaper Row), completed in December 1890; and statue of Benjamin Franklin.