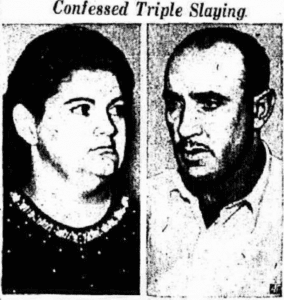 The modus operandi was to use “lonely hearts” ads to lure lonesome women into romantic situations in order to make use of their financial resources. In several cases (at least) the victims were then murdered.

Raymond Martinez Fernandez had come up with the scheme, then was joined in the enterprise by Martha Beck in the late 1940s. But their killing spree halted when they were arrested in Michigan, where they admitted to having murdered a woman and her young daughter. Because they were in a state with no death penalty, they also felt comfortable telling police there about a widow they had murdered in New York State.

But their expectation of avoiding execution proved faulty when they were extradited to New York – which had an electric chair – one that was used with some frequency at the time.

The deadly duo had met when Beck replied to one of the ads Fernandez had placed. She was intended to be his victim, but instead the two fell in love and teamed up to find, rob, and kill women who were desperate for affection. Fernandez would claim to have murdered 17 women, but authorities were unable to confirm this number.

The New York State victim whose slaying finally brought them down was Janet J. Fay (nee Flinn). Her husband, Matthew P. Fay, was an Albany steamfitter, and they had lived on Caldwell Street in that city, until Matthew’s sudden death in 1946. The couple were listed in the 1930 census, along with Matthew’s daughter from a previous marriage, Mary C. Fay, who was then employed as a hospital nurse. Mary later married Dr. Alton Spencer, and the couple and their daughter resided in Canajoharie in 1940. 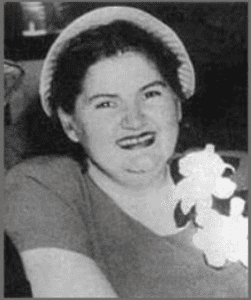 Fay, despite being involved with her church, understandably became lonely after the loss of her husband, and seemed to have solved that problem late in 1948, when she met up with Fernandez. He visited at her apartment on New Year’s Eve, while Beck stayed out of the way at a hotel. After their initial meeting, Beck was introduced as the sister of Fernandez (a ploy used with other victims). Before long, Fernandez proposed marriage to the lonesome widow, and she accepted.

Fay introduced her new “friends” to the Spencers in a brief visit to their home in Amsterdam in Montgomery County, where they then lived. Fay explained that she intended to marry Fernandez, and the Spencers afterward stated that he and Beck had aroused no suspicions during that visit, just after New Year’s Day in 1949.

After Fay had withdrawn several thousand dollars from her bank account, she left Albany with the couple, who took her to Valley Stream on Long Island. Early in January, the Spencers received a telegram saying that Fay wanted to have her belongings sent to her in New York City. On January 11, a letter came that made them suspicious. It was signed by Fay, and said that she was very happy. However, it was typed, and every other letter she’d ever sent to her stepdaughter had been handwritten.

The Spencers wrote to the address where the telegram had indicated her things should be forwarded, but their letter was returned. The Albany Police Department was then notified, and they interviewed some of Fay’s acquaintances and determined that she had met a man and woman and had gone off with them At Valley Stream.  Police said Janet Fay was murdered after Beck reportedly became jealous when she saw her lover in a romantic embrace with the victim of their scam. Beck bludgeoned Janet with a hammer and Fernandez then strangled her with a scarf. Her body eventually was stuffed into a trunk and taken to an address in Ozone Park in Queens County, where it was buried in the cellar of a house the couple were renting.

The pair, whom the press labeled the “Lonely Hearts Killers,” then traveled to Michigan where they worked the same scam on a widow there. But the woman became suspicious, and she and her young daughter were murdered to keep her from exposing Beck and Fernandez. Police in Michigan were able to discover and apprehend them, and they confessed to the murders there as well as the one in New York State. With no death penalty in Michigan, they thought they would escape execution, but didn’t count on being extradited back to the Empire State.

Police found the body of the Albany widow, and Mary Spencer went to Queens early in March to identify it as that of her stepmother. During the murder trial that summer, Dr. Spencer appeared and identified some jewelry as having belonged to Janet Fay. A ring had been found in the possession of Beck, and other items had been found in their living quarters in Michigan. Mrs. Spencer also testified, and told of the visit the two killers had made to her home in Amsterdam. In addition to the Spencers, several individuals from Albany appeared and told about Fay’s encounters with Beck and Fernandez.

During the trial, which was held in the Bronx instead of Nassau County in order to avoid potential prejudice, Beck tried to make the case that she had been overcome with rage after Fay had slapped her and did not know what she had done. But a psychiatrist testified that she was “a pathological liar who would say anything that would serve herself.” Fernandez blamed Beck for the killing, which he claimed no knowledge of.

The jurors did not find the defendants’ arguments convincing, however. They were found guilty, and on March 8, 1951 the electric chair at Sing Sing Prison permanently ended their criminal activities. Two others were executed before Fernandez was put in the chair, followed shortly afterward by Beck. A newspaper story said that the couple “continued to the last to swear devotion to each other.” Asked if he still loved Beck, Fernandez answered “of course I do. I want to shout it out….” Reporters said that Beck told them: “Imprisonment in the death house has only strengthened my feeling for Raymond.”

Apparently no relatives claimed the body of Fernandez and he was buried at state expense in the prison cemetery after a lightly attended funeral in the Sing Sing chapel. Beck’s remains were turned over to relatives, and she is buried in Milton, Florida.

A 1970 film, The Honeymoon Killers, was based on the story of Beck and Fernandez. It featured Shirley Stoler and Tony Lo Bianco, and was written and directed by Leonard Kastle, who served as a visiting professor at the University at Albany in the 1980s. It is available on YouTube.