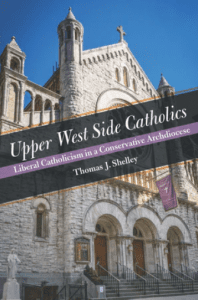 The Bloomingdale Neighborhood History group has announced “Upper West Side Catholics: the History of Ascension Church on West 107th Street,” a presentation by Monsignor Thomas J. Shelley, has been set for Tuesday, February 25, at 6:30 pm.

Monsignor Shelley, author of the recently published book Upper West Side Catholics: Liberal Catholicism in a Conservative Archdiocese and professor emeritus of Fordham, is set to tell the story of this well-known Upper West Side church.

Shelley sees Ascension as a microcosm of the history of the Catholic Church in the city, a flourishing multi-ethnic bilingual parish and a vital part of the Bloomingdale neighborhood. The church, which began as a small German parish in 1858 and then developed into a large Irish parish, suffered a decline from the 1960s to the 1980s, but was rescued from near-extinction by an influx of Puerto Rican and Dominican Catholics.

Shelley’s recently published book Upper West Side Catholics: Liberal Catholicism in a Conservative Archdiocese includes more information on the Lion Brewery than any other book about the Upper West Side. The Brewery stood just a few blocks from the church from the mid 1800s to 1944, spanning a huge piece of land that stretched from West 107th to West 109th Streets, Columbus Avenue to Central Park West.

This event will be held at Hostelling International-NY, located at 891 Amsterdam Avenue, New York City. More information is available online, or by calling (212) 666-9774.