In the early 1970s, American artists Edward Kienholz and Nancy Reddin Kienholz began work on The Caddy Court, a 1966 Dodge van between the front and back ends of a 1978 Cadillac, which reimagines the Supreme Court of the United States in one of its original functions as a “riding circuit” court.

In the Kienholzes’interpretation, The Caddy Court was conceived as a road-worthy vehicle, that could literally be driven across the country to adjudicate from state to state, and town to town.

The Kienholzes created the mobile edifice by splicing a 1966 Dodge van between the front and back ends of a 1978 Cadillac. A blindfolded Justice with broken scales comprises its hood ornament; a checkerboard “racing stripe” bears portraits of all of the Supreme Court justices from 1790 to the year of the work’s creation; and on the car’s doors, the unofficial seal of “The Caddy Court of America” upholds the motto “Under God We Twist.” Upon entering a portico lined with a law library, the viewer enters the court chamber to discover the presiding justices portrayed by nine taxidermy animal heads and sculls in formal robes. 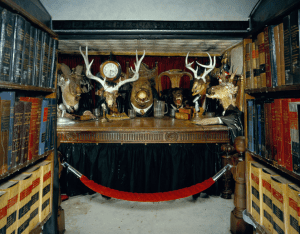 Although the Kienholzes began their work on The Caddy Court in the early 1970s, the tableau continues to call for reflection on the Judicial Branch’s power and scope, and the powerful role the US Supreme Court plays in our daily lives.