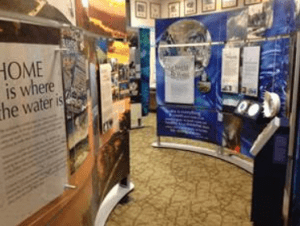 The Smithsonian’s traveling exhibition, Water/Ways, which looks at how humanity has used water and how water has helped shaped civilization, is set to arrive at Clinton Academy Museum on February 29th for a six-week stay.

Water impacts climate, agriculture, transportation, industry and more. The East Hampton Historical Society, in cooperation with the Museum Association of New York (MANY), will examine water as an environmental necessity and an important cultural element as it hosts this traveling exhibition from the Smithsonian’s Museum on Main Street (MoMS) program.

The exhibit opens Saturday, February 29, with a celebratory opening reception from 4 to 6 pm. The exhibit will be on view Tuesdays through Saturdays, from 10 am to 3 pm through April 11, 2020.

New York is home to more than 7,600 bodies of fresh water. It also borders two of the Great Lakes, the Long Island Sound and the Atlantic Ocean. The Smithsonian’s Water/Ways exhibition explores water’s great role in New York and water’s effect on migration and settlement, and the relationship between water and politics, economics and culture.

Museum on Main Street is designed to share the resources of the Smithsonian with small towns through partnerships with state humanities councils and museum associations. The East Hampton Historical Society will hold an array of community-based programs over the course of the six-week exhibit, all of which support, illuminate, and foster curiosity about water and its role in our lives.

Programs include Watercolor Workshops for Kids & Adults, a series of lectures, including “What is a Waterway Anyway” by Daniel Rinn on March 12 and “History of Montaukett/Shinnecock Fishing” on March 20, and a staged reading of “Salt Water People” on March 29.

The Clinton Academy Museum is located at 151 Main Street, East Hampton. There is no admission, donations are welcome. More information is available online.